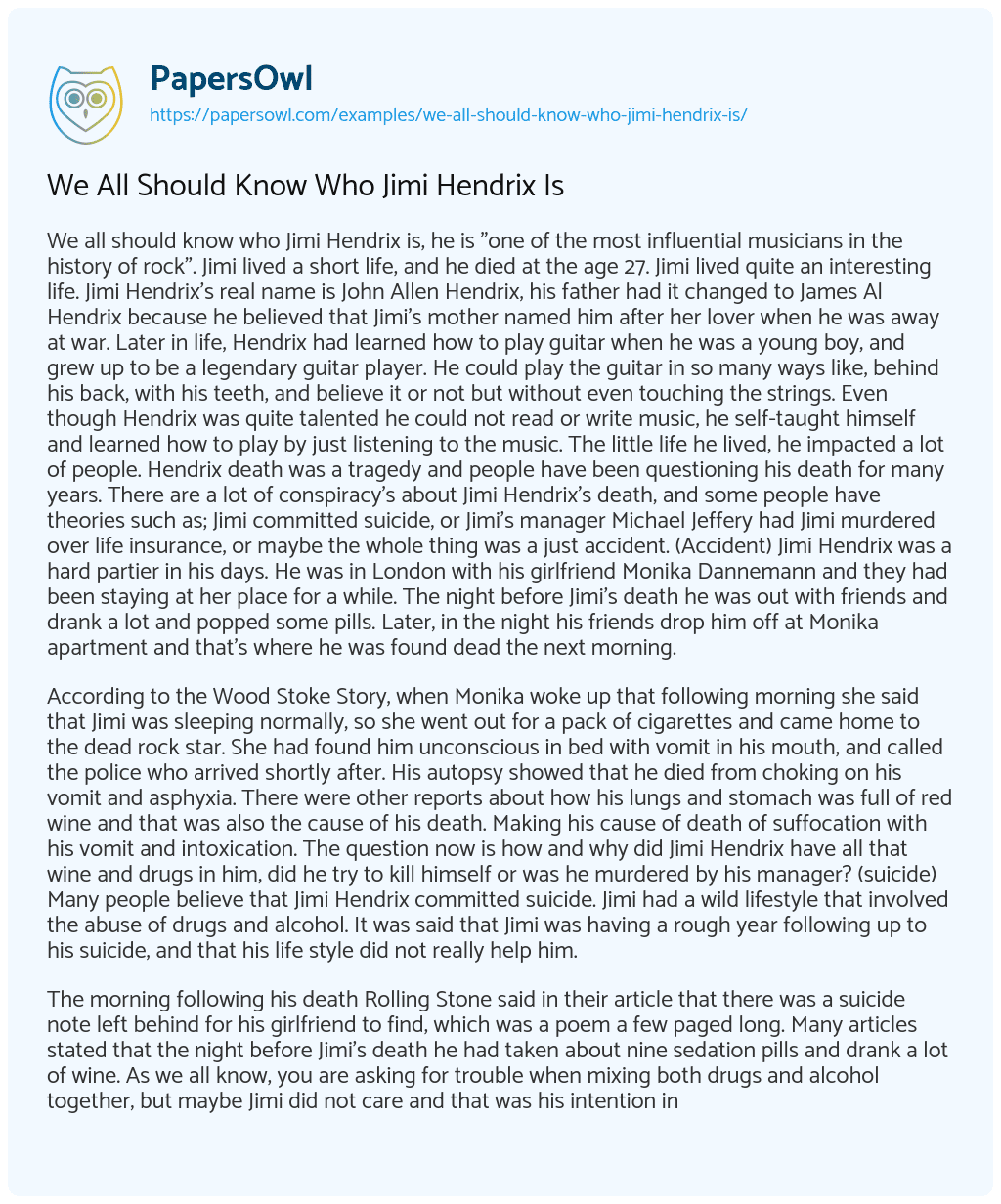 We all should know who Jimi Hendrix is, he is “one of the most influential musicians in the history of rock”. Jimi lived a short life, and he died at the age 27. Jimi lived quite an interesting life. Jimi Hendrix’s real name is John Allen Hendrix, his father had it changed to James Al Hendrix because he believed that Jimi’s mother named him after her lover when he was away at war. Later in life, Hendrix had learned how to play guitar when he was a young boy, and grew up to be a legendary guitar player. He could play the guitar in so many ways like, behind his back, with his teeth, and believe it or not but without even touching the strings. Even though Hendrix was quite talented he could not read or write music, he self-taught himself and learned how to play by just listening to the music. The little life he lived, he impacted a lot of people. Hendrix death was a tragedy and people have been questioning his death for many years. There are a lot of conspiracy’s about Jimi Hendrix’s death, and some people have theories such as; Jimi committed suicide, or Jimi’s manager Michael Jeffery had Jimi murdered over life insurance, or maybe the whole thing was a just accident. (Accident) Jimi Hendrix was a hard partier in his days. He was in London with his girlfriend Monika Dannemann and they had been staying at her place for a while. The night before Jimi’s death he was out with friends and drank a lot and popped some pills. Later, in the night his friends drop him off at Monika apartment and that’s where he was found dead the next morning.

According to the Wood Stoke Story, when Monika woke up that following morning she said that Jimi was sleeping normally, so she went out for a pack of cigarettes and came home to the dead rock star. She had found him unconscious in bed with vomit in his mouth, and called the police who arrived shortly after. His autopsy showed that he died from choking on his vomit and asphyxia. There were other reports about how his lungs and stomach was full of red wine and that was also the cause of his death. Making his cause of death of suffocation with his vomit and intoxication. The question now is how and why did Jimi Hendrix have all that wine and drugs in him, did he try to kill himself or was he murdered by his manager? (suicide) Many people believe that Jimi Hendrix committed suicide. Jimi had a wild lifestyle that involved the abuse of drugs and alcohol. It was said that Jimi was having a rough year following up to his suicide, and that his life style did not really help him.

The morning following his death Rolling Stone said in their article that there was a suicide note left behind for his girlfriend to find, which was a poem a few paged long. Many articles stated that the night before Jimi’s death he had taken about nine sedation pills and drank a lot of wine. As we all know, you are asking for trouble when mixing both drugs and alcohol together, but maybe Jimi did not care and that was his intention in the first place. The next morning Jimi’s girlfriend found his body lifeless and called the police. When the autopsy came back it was said that, “The low blood alcohol content in comparison with the amount of wine found in Hendrix’s body meant that the ingestion of the wine was so quick that it didn’t even have time to enter his blood stream. This inconsistency suggests that excessive drinking was not the cause of death.

The physical evidence suggests that the excessive amounts of wine in his stomach as well as lungs are more consistent with being water boarded.”. There were a few people that could gain a lot from Jimi’s death and just maybe they were willing to go to certain extent to get what they want. (Murder) There was one person who would benefit from Jimi Hendrix death and that was Michael Jeffery, Hendrix’s. Jeffery had an unremarkable reason for wanting Jimi dead. Apparently, Jeffery had received a letter in the mail a few days prior to Jimi’s death, Jeffery thought the letter was about Jimi finding a new manager. Jeffery thought Jimi was going to leave him, and if that happened he would lose everything. James Write, a friend of Jeffery told reports that Jeffery had said a few things after getting ridiculously drunk. “Wright says Jeffrey confessed to him a year after the star’s death that Hendrix was worth more to him dead than alive’. Jeffrey had apparently taken out a life insurance policy on the musician then worth about ?1.2m (2 million), with himself as the beneficiary.

Two years later, Jeffrey himself was killed in a plane crash.”. Write also stated that Jeffery also confessed about kill Jimi, “I was in London the night of Jimi’s death and together with some old friends… we went around to Monika’s hotel room, got a handful of pills and stuffed them into his mouth… then poured a few bottles of red wine deep into his windpipe. I had to do it. Jimi was worth much more to me dead than alive. That son of a bitch was going to leave me. If I lost him, I’d lose everything.”. Even though Jeffery was in Spain the night of Jimi’s death, that did not mean he couldn’t hire someone to kill Jimi for him.

We All Should Know Who Jimi Hendrix Is. (2019, Aug 08). Retrieved from https://papersowl.com/examples/we-all-should-know-who-jimi-hendrix-is/