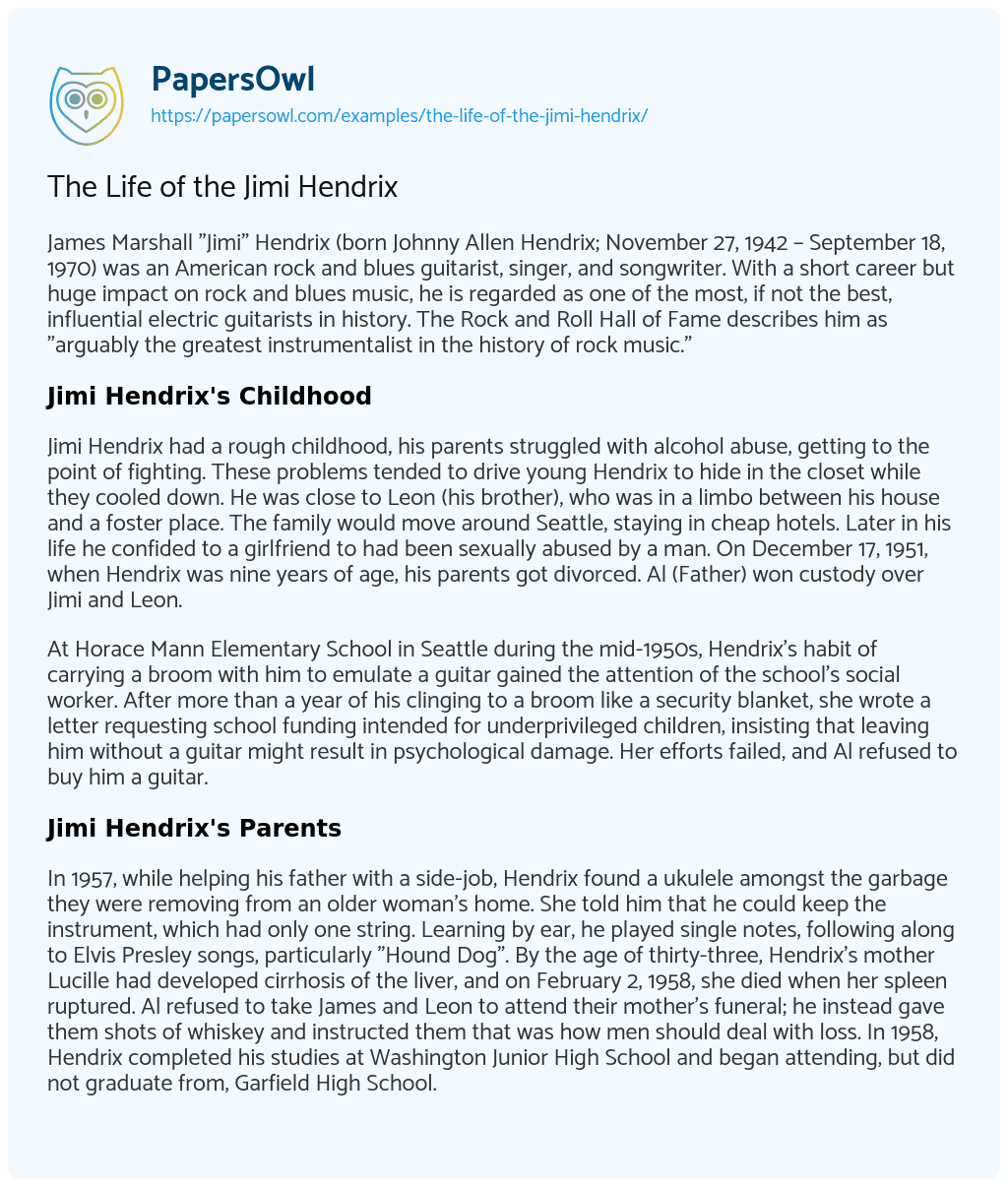 James Marshall “Jimi” Hendrix (born Johnny Allen Hendrix; November 27, 1942 – September 18, 1970) was an American rock and blues guitarist, singer, and songwriter. With a short career but huge impact on rock and blues music, he is regarded as one of the most, if not the best, influential electric guitarists in history. The Rock and Roll Hall of Fame describes him as “arguably the greatest instrumentalist in the history of rock music.”

Jimi Hendrix had a rough childhood, his parents struggled with alcohol abuse, getting to the point of fighting. These problems tended to drive young Hendrix to hide in the closet while they cooled down. He was close to Leon (his brother), who was in a limbo between his house and a foster place. The family would move around Seattle, staying in cheap hotels. Later in his life he confided to a girlfriend to had been sexually abused by a man. On December 17, 1951, when Hendrix was nine years of age, his parents got divorced. Al (Father) won custody over Jimi and Leon.

At Horace Mann Elementary School in Seattle during the mid-1950s, Hendrix’s habit of carrying a broom with him to emulate a guitar gained the attention of the school’s social worker. After more than a year of his clinging to a broom like a security blanket, she wrote a letter requesting school funding intended for underprivileged children, insisting that leaving him without a guitar might result in psychological damage. Her efforts failed, and Al refused to buy him a guitar.

In 1957, while helping his father with a side-job, Hendrix found a ukulele amongst the garbage they were removing from an older woman’s home. She told him that he could keep the instrument, which had only one string. Learning by ear, he played single notes, following along to Elvis Presley songs, particularly “Hound Dog”. By the age of thirty-three, Hendrix’s mother Lucille had developed cirrhosis of the liver, and on February 2, 1958, she died when her spleen ruptured. Al refused to take James and Leon to attend their mother’s funeral; he instead gave them shots of whiskey and instructed them that was how men should deal with loss. In 1958, Hendrix completed his studies at Washington Junior High School and began attending, but did not graduate from, Garfield High School.

The Life of the Jimi Hendrix. (2019, Sep 24). Retrieved from https://papersowl.com/examples/the-life-of-the-jimi-hendrix/

An Examined Life is the only Morally Worthwhile Life