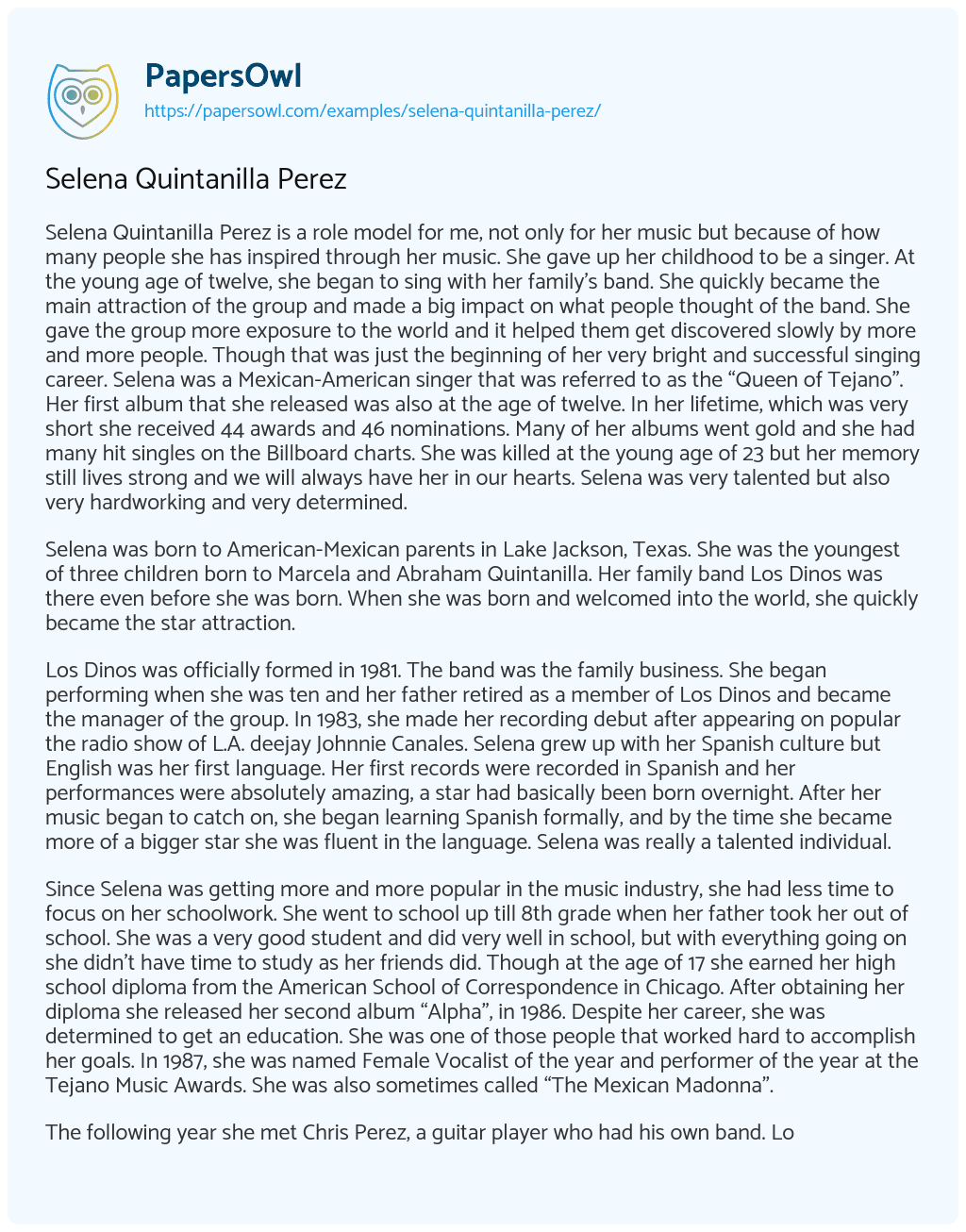 Selena Quintanilla Perez is a role model for me, not only for her music but because of how many people she has inspired through her music. She gave up her childhood to be a singer. At the young age of twelve, she began to sing with her family’s band. She quickly became the main attraction of the group and made a big impact on what people thought of the band. She gave the group more exposure to the world and it helped them get discovered slowly by more and more people. Though that was just the beginning of her very bright and successful singing career. Selena was a Mexican-American singer that was referred to as the “Queen of Tejano”. Her first album that she released was also at the age of twelve. In her lifetime, which was very short she received 44 awards and 46 nominations. Many of her albums went gold and she had many hit singles on the Billboard charts. She was killed at the young age of 23 but her memory still lives strong and we will always have her in our hearts. Selena was very talented but also very hardworking and very determined.

Selena was born to American-Mexican parents in Lake Jackson, Texas. She was the youngest of three children born to Marcela and Abraham Quintanilla. Her family band Los Dinos was there even before she was born. When she was born and welcomed into the world, she quickly became the star attraction.

Los Dinos was officially formed in 1981. The band was the family business. She began performing when she was ten and her father retired as a member of Los Dinos and became the manager of the group. In 1983, she made her recording debut after appearing on popular the radio show of L.A. deejay Johnnie Canales. Selena grew up with her Spanish culture but English was her first language. Her first records were recorded in Spanish and her performances were absolutely amazing, a star had basically been born overnight. After her music began to catch on, she began learning Spanish formally, and by the time she became more of a bigger star she was fluent in the language. Selena was really a talented individual.

Since Selena was getting more and more popular in the music industry, she had less time to focus on her schoolwork. She went to school up till 8th grade when her father took her out of school. She was a very good student and did very well in school, but with everything going on she didn’t have time to study as her friends did. Though at the age of 17 she earned her high school diploma from the American School of Correspondence in Chicago. After obtaining her diploma she released her second album “Alpha”, in 1986. Despite her career, she was determined to get an education. She was one of those people that worked hard to accomplish her goals. In 1987, she was named Female Vocalist of the year and performer of the year at the Tejano Music Awards. She was also sometimes called “The Mexican Madonna”.

The following year she met Chris Perez, a guitar player who had his own band. Los Dinos hired him to play in the band and the two quickly fell in love. There was some tension between Selena’s father and Chris but in the long run, he accepted Chris as his son-in-law. Selena won her first Grammy in 1993 for best American-Mexican Performance for her album. Despite all her success she was not nearly finished with her music career. She launched a tour throughout Central and North America and released a new album “Amor Prohibido”, in 1994, a few months after her tour. Selena was unstoppable until one tragic day.

March 31, 1995, at a Days Inn in Corpus Christi, Texas was where Selena would be brutally murdered. She was murdered by the manager of her fan club, Yolanda Salvidor. Selena was trying to get financial papers that Yolanda had stolen from her, the two began arguing in the hotel room when all of a sudden Yolanda pulled out a pistol and she put it against her head. Selena then tried to run away to get help but it was too late, She was shot in her back while trying to run away. She was rushed to the hospital but she was announced dead at 1:05 pm because of blood loss from the gunshot wound.

She did so much more than she could have ever imagined. She wasn’t able to see her English album grow to become her biggest album, but it was finished in July of 1995. This CD won a Grammy. It later was one of her very first albums to go double-platinum. She became the first Latin singer to ever make it to the top that quickly in the few years that she had. She had sold so many copies of her album during the first week, it was so crazy to see how many people cared about her and how many fans she had not only nationwide but worldwide. She was honored with over 60 awards from 1983-1995.

Selena was an individual who gave up everything that she could have received in her childhood to become a singer. She dedicated her life to her fans and even went out to the schools to talk to the kids about music and the power and influence it has. She would’ve done anything for her fans and anything to make them happy. With the few years she had in the world she was truly appreciated and she will always be.

Her life was short but she had an impact on so many people including me. With her strong will to keep on going in such a hard industry, she deserves anyone’s respect. She will always be one of my favorite artists and it is thanks to her that I understand more the meaning of music. She will forever live in our hearts and she will always truly be missed.