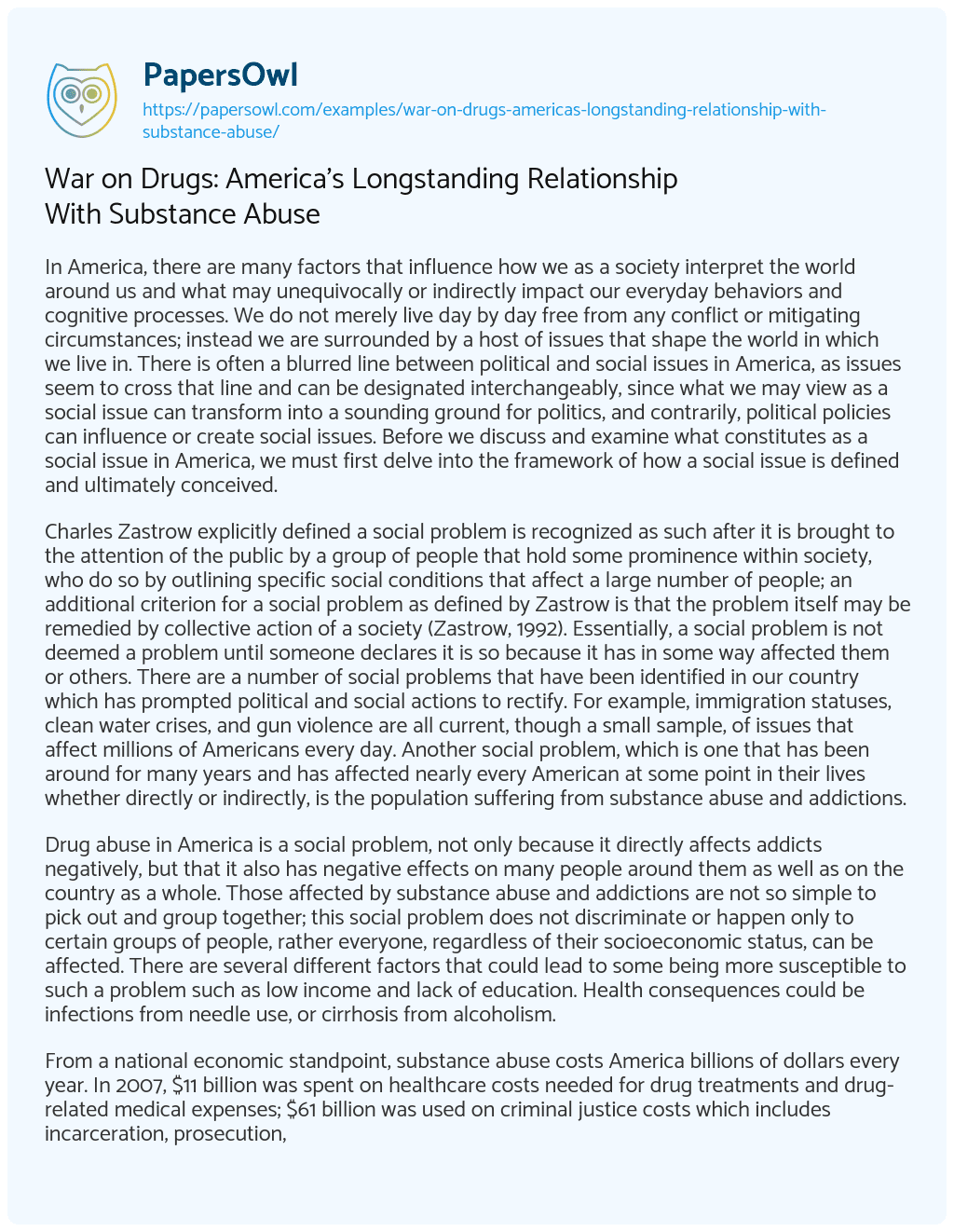 In America, there are many factors that influence how we as a society interpret the world around us and what may unequivocally or indirectly impact our everyday behaviors and cognitive processes. We do not merely live day by day free from any conflict or mitigating circumstances; instead we are surrounded by a host of issues that shape the world in which we live in. There is often a blurred line between political and social issues in America, as issues seem to cross that line and can be designated interchangeably, since what we may view as a social issue can transform into a sounding ground for politics, and contrarily, political policies can influence or create social issues. Before we discuss and examine what constitutes as a social issue in America, we must first delve into the framework of how a social issue is defined and ultimately conceived.

Charles Zastrow explicitly defined a social problem is recognized as such after it is brought to the attention of the public by a group of people that hold some prominence within society, who do so by outlining specific social conditions that affect a large number of people; an additional criterion for a social problem as defined by Zastrow is that the problem itself may be remedied by collective action of a society (Zastrow, 1992). Essentially, a social problem is not deemed a problem until someone declares it is so because it has in some way affected them or others. There are a number of social problems that have been identified in our country which has prompted political and social actions to rectify. For example, immigration statuses, clean water crises, and gun violence are all current, though a small sample, of issues that affect millions of Americans every day. Another social problem, which is one that has been around for many years and has affected nearly every American at some point in their lives whether directly or indirectly, is the population suffering from substance abuse and addictions.

Drug abuse in America is a social problem, not only because it directly affects addicts negatively, but that it also has negative effects on many people around them as well as on the country as a whole. Those affected by substance abuse and addictions are not so simple to pick out and group together; this social problem does not discriminate or happen only to certain groups of people, rather everyone, regardless of their socioeconomic status, can be affected. There are several different factors that could lead to some being more susceptible to such a problem such as low income and lack of education. Health consequences could be infections from needle use, or cirrhosis from alcoholism.

From a national economic standpoint, substance abuse costs America billions of dollars every year. In 2007, $11 billion was spent on healthcare costs needed for drug treatments and drug-related medical expenses; $61 billion was used on criminal justice costs which includes incarceration, prosecution, and investigation; and $120 billion in lost productivity revenue due to labor participation costs, participation in drug treatment programs, incarceration, and death (How Elicit Drug Use Affects., 2011.).

Addicts also face a host of consequences and health issues following their drug use. Over time, addicts become more dependent on the drugs they are abusing and could face socioeconomic problems ranging from draining out their bank accounts, maxing their lines of credit, becoming late on bills, and losing their jobs, which ultimately destroys the ability for regular income to try to salvage the latter mentioned. From here, homes can be lost due to a failure of paying the rent or mortgage, and relationships are left in ruin.

Rural America has a very specific role in drug addicted America in that they have their own distinct crisis happening in their small farm towns. Heroin poses as a significant challenge for those living in these areas. Specifically characteristic of these areas, food insecurities, and housing and transportation issues are all believed to be deep rooted concerns that have a significant impact of the widespread opioid crisis currently occurring (Milano, 2018). An indirect consequence of the opioid crisis, as found by a survey completed by the National Farmers Union and the American Farm Bureau Federation, is that in 2017 74% of farmers in rural America have been directly affected by the opioid epidemic (Survey Shows Massive Opioid Impact., 2017).

The issue of substance abuse in America is hardly a new development. The consumption of alcohol has been around since colonial times, with alcoholism treatment facilities emerging in the late 18th to early 19th centuries (Henninger & Sung, 2014). The Progressive Era served as a time of reform and radical political and social changes sweeping the nation, including the expansion of alcohol treatment centers. In 1906, the Pure Food and Drug Act was established, requiring that all over-the-counter medications be labeled appropriately if they incorporated cocaine, opiates, or cannabis (Brown, 1981). Brown furthered that the act was intended to avert the manufacturing, sale, or transportation of adulterated food, drugs, and liquors; however, the act was later found to enable drug use and safeguard its users, leading to a reformation in 1909. During the 1920’s during Prohibition, the use and sale of alcohol was notoriously prohibited, in hopes to decrease the amount of citizens who fell prey to alcoholism. The consumption of alcohol was considered to be a moral lapse in character, and rather than treating it as a public health issue, politicians believed barring it altogether would solve the problem (Henninger & Sung, 2014). In conjunction with alcoholism, another social problem seems to be closely related, which is poverty. Both alcoholism and poverty contribute and affect one another; the poor engage in excessive drinking, and the excessive drinkers eventually become poor.

In the 1960’s, psychedelic drug use had proverbially exploded in America through the use of LSD, cocaine, PCP, and marijuana (Brown, 1981). This time period, known as the Conservative Response Era, also experience the emergence of a dangerous illegal drug, heroin, which was highly sought after and used following the Vietnam War (Golub, Bennett, & Elliot, 2014). The Federal Comprehensive Drug Abuse Prevention and Control Act of 1970 was a groundbreaking policy that had set the course for America’s mounting war on drugs. This act is best known for creating the controlled substance schedule, classifying all kinds of illicit to legal drugs in America and categorizing them by most potential to abuse to least.

I. Two current policies that address the social problem

a) Comprehensive Addiction and Recovery Act (CARA) of 2016

The Role of Social Workers: Counselors in Substance Abuse