The Significance of Public Health: the War on Drugs 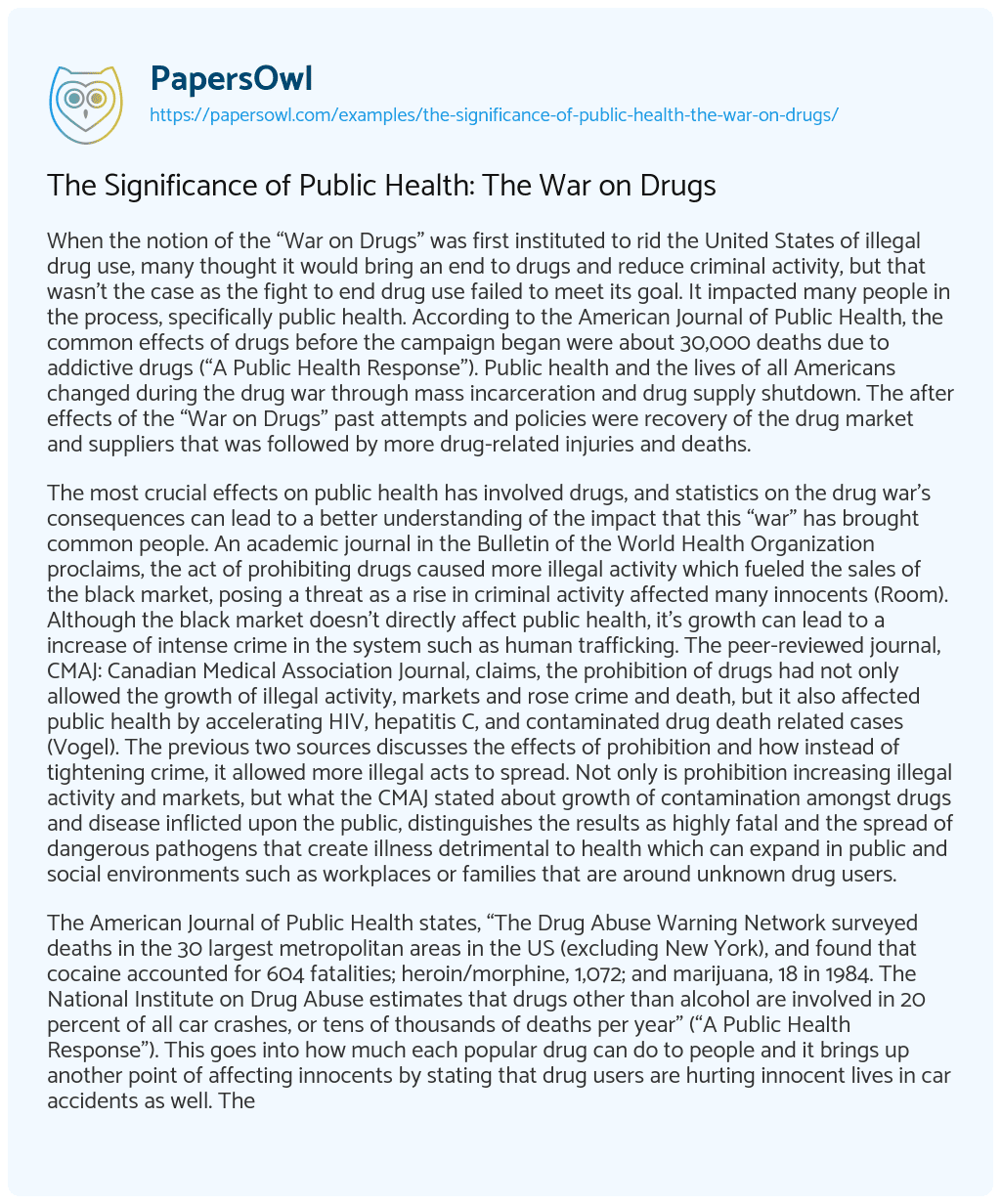 When the notion of the “War on Drugs” was first instituted to rid the United States of illegal drug use, many thought it would bring an end to drugs and reduce criminal activity, but that wasn’t the case as the fight to end drug use failed to meet its goal. It impacted many people in the process, specifically public health. According to the American Journal of Public Health, the common effects of drugs before the campaign began were about 30,000 deaths due to addictive drugs (“A Public Health Response”). Public health and the lives of all Americans changed during the drug war through mass incarceration and drug supply shutdown. The after effects of the “War on Drugs” past attempts and policies were recovery of the drug market and suppliers that was followed by more drug-related injuries and deaths.

The most crucial effects on public health has involved drugs, and statistics on the drug war’s consequences can lead to a better understanding of the impact that this “war” has brought common people. An academic journal in the Bulletin of the World Health Organization proclaims, the act of prohibiting drugs caused more illegal activity which fueled the sales of the black market, posing a threat as a rise in criminal activity affected many innocents (Room). Although the black market doesn’t directly affect public health, it’s growth can lead to a increase of intense crime in the system such as human trafficking. The peer-reviewed journal, CMAJ: Canadian Medical Association Journal, claims, the prohibition of drugs had not only allowed the growth of illegal activity, markets and rose crime and death, but it also affected public health by accelerating HIV, hepatitis C, and contaminated drug death related cases (Vogel). The previous two sources discusses the effects of prohibition and how instead of tightening crime, it allowed more illegal acts to spread. Not only is prohibition increasing illegal activity and markets, but what the CMAJ stated about growth of contamination amongst drugs and disease inflicted upon the public, distinguishes the results as highly fatal and the spread of dangerous pathogens that create illness detrimental to health which can expand in public and social environments such as workplaces or families that are around unknown drug users.

The American Journal of Public Health states, “The Drug Abuse Warning Network surveyed deaths in the 30 largest metropolitan areas in the US (excluding New York), and found that cocaine accounted for 604 fatalities; heroin/morphine, 1,072; and marijuana, 18 in 1984. The National Institute on Drug Abuse estimates that drugs other than alcohol are involved in 20 percent of all car crashes, or tens of thousands of deaths per year” (“A Public Health Response”). This goes into how much each popular drug can do to people and it brings up another point of affecting innocents by stating that drug users are hurting innocent lives in car accidents as well. The American Economic Review remarks, “During the four months after the intervention, prices recovered, while purity required 18 months to recover to 85 percent of its original level” (Dobkin and Nicosia). The “War on Drugs” action as a whole has expressed harmful effects to public health through crime in prohibition, spread of disease, and car crash incidents, but the worst effect it had was it not having any stable effect as the drug economy has shown to recover a couple months after attempts of stopping it.

One glossed over subject to most people regarding the “War on Drugs” is the effects it had on families. It led to many people fighting to either stop drugs or stop the people trying to prevent drug use. This war brought many people, some of whom were parents or guardians of children, to be incarcerated. As reported by the peer-reviewed health journal, Revista Panamericana de Salud Publica, “An estimated 50,000 children lost either one or both parents or guardians, and a growing awareness of orphans as a public health issue followed” (Camacho). The article discusses how such as thin line remains of determining so many cases, leaving many to be left unchecked and many children forced to act as their parents once had in partaking in criminal activity to just survive and keep a stable living. The American Journal of Public Health adds, “Sarandon Jones, a 32-year-old mother convicted of “conspiracy to distribute crack cocaine” although no drugs were found on her, who was sentenced to life without parole—for a first offense” (Drucker). At first, this piece of evidence seems irrelevant as it just discusses an arrestee, but the article gives several examples of these arrestees. It does so to prove the fact that the “War on Drugs” was harsh on anyone with some kind of background and lead to long sentences, leading to the arrested parents’ children to be left unattended and uncared for, and sometimes showing it has caused some innocent people to go to prison based off of harsh regulation and light assumptions. This really goes to show how public health isn’t just people dying from drugs, but many more being affected due to being a relative or social friend with drug users that can impact their health, living, and security without being the drug taker.

The “War on Drugs”, although when first attempted led to short victory followed by increase use, it showed that illegal drug use could be reduced, but not through means of enforcement. Prevention and treatment has become a more desired approach to the public health concern as data has proven it necessary in the recovery of drug abusers. According to a peer-reviewed, health-related academic website, Lancet, “Voters in California passed, by 3–2, a ballot measure that requires that people convicted of simple possession of drugs be sentenced to mandatory treatment, instead of jail time, and allocates US$120 million to fund drug-treatment programmes” (“Rethinking America”). People are already taking action into securing a better fate for drug users and public health as they push for passive penalties. The American Economic Review observes that after the DEA stopped two major methamphetamine suppliers, the number of individuals seeking treatment for the drug decreased by approximately 35 percent (Dobkin and Nicosia).

Although this was an enforced effort, it shows that people were probably quitting drugs due to high forms of punishment which counters the basis for a need of treatment. Pain Management, a peer-reviewed journal, notes, “Chronic pain patients are more prone to addiction or abuse of prescription pain medications. A number of clinics in Washington advised their chronic pain patients that they would no longer provide medications, which heretofore had been effective in, and in some instances essential to, managing their pain, thereby enabling them to maintain function and an acceptable quality of life” (Rich). The difficulty of relying on treatment are separating those that actually need the drug for pain and those who are drug-seekers. The solution would be to have strict background checks and tests to see a patient’s required dosage and the amount they try to get. The American Journal of Public Health claims many people, including government officials, are now favoring a change in the process of punishment to reduce harmful impacts on arrestees and their families (Drucker). With the solution of treatment seeming somewhat questionable, yet highly possible for reducing drug use, better policies mixed with these forms of passive solutions can lead to the recovery of public health in terms of drugs.

The failure of the “War on Drugs” might have benefited the United States afterall. It’s impact on public health proves the use of drugs to be dangerous and fatal, but so can the approaches to stopping it, leading to safer resolutions, such as prevention and treatment. It can also lead to less harsh punishments for arrestees and better care for families affected. Educating the public and changing policies to better equip people for a life without drugs and going the less aggressive path can show drug users that people care and are concerned about their health and the public’s health in general that revolve around taking these substances. A softer approach could prove to be strongly effective over time.

The Significance of Public Health: The War on Drugs. (2021, Oct 19). Retrieved from https://papersowl.com/examples/the-significance-of-public-health-the-war-on-drugs/

War on Drugs in US

The War on Drugs and its Impact on the United States