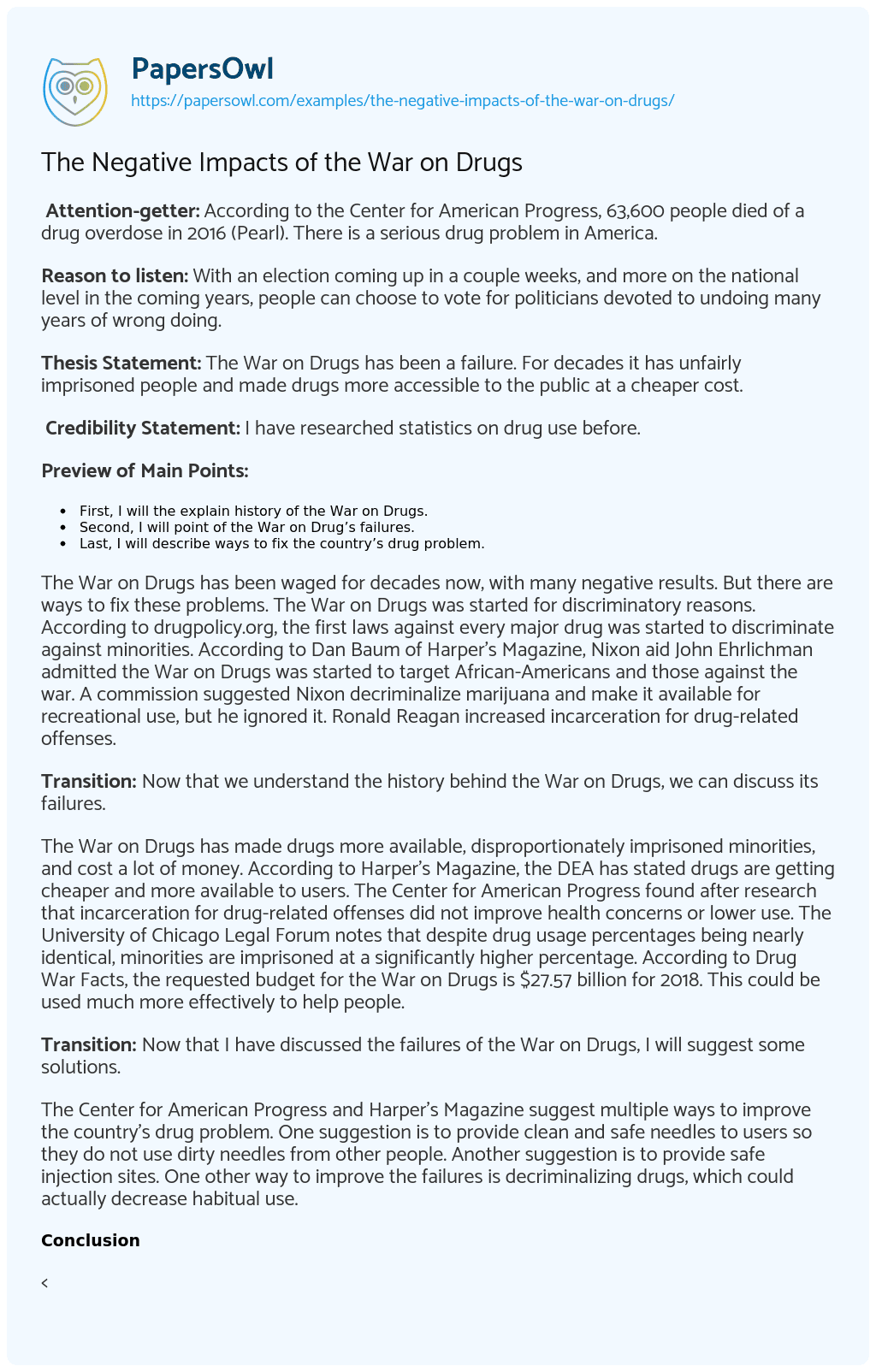 Attention-getter: According to the Center for American Progress, 63,600 people died of a drug overdose in 2016 (Pearl). There is a serious drug problem in America.

Reason to listen: With an election coming up in a couple weeks, and more on the national level in the coming years, people can choose to vote for politicians devoted to undoing many years of wrong doing.

Thesis Statement: The War on Drugs has been a failure. For decades it has unfairly imprisoned people and made drugs more accessible to the public at a cheaper cost.

Credibility Statement: I have researched statistics on drug use before.

The War on Drugs has been waged for decades now, with many negative results. But there are ways to fix these problems. The War on Drugs was started for discriminatory reasons. According to drugpolicy.org, the first laws against every major drug was started to discriminate against minorities. According to Dan Baum of Harper’s Magazine, Nixon aid John Ehrlichman admitted the War on Drugs was started to target African-Americans and those against the war. A commission suggested Nixon decriminalize marijuana and make it available for recreational use, but he ignored it. Ronald Reagan increased incarceration for drug-related offenses.

Transition: Now that we understand the history behind the War on Drugs, we can discuss its failures.

The War on Drugs has made drugs more available, disproportionately imprisoned minorities, and cost a lot of money. According to Harper’s Magazine, the DEA has stated drugs are getting cheaper and more available to users. The Center for American Progress found after research that incarceration for drug-related offenses did not improve health concerns or lower use. The University of Chicago Legal Forum notes that despite drug usage percentages being nearly identical, minorities are imprisoned at a significantly higher percentage. According to Drug War Facts, the requested budget for the War on Drugs is $27.57 billion for 2018. This could be used much more effectively to help people.

Transition: Now that I have discussed the failures of the War on Drugs, I will suggest some solutions.

The Center for American Progress and Harper’s Magazine suggest multiple ways to improve the country’s drug problem. One suggestion is to provide clean and safe needles to users so they do not use dirty needles from other people. Another suggestion is to provide safe injection sites. One other way to improve the failures is decriminalizing drugs, which could actually decrease habitual use.

Review of main points: I began by explaining the history of the War on Drugs. Then I described the War’s failure. Lastly, I provided some effective solutions for these failures.

Restate thesis: The War on Drugs has unfairly targeted and imprisoned people and failed to accomplish what it was supposed to.

Closure: Even as college students, we can have a strong impact on public policy, and this impact will only get stronger. It is up to us to fix the wrongdoings of those before us and help people who need it.

The Negative Impacts of the War on Drugs. (2021, Nov 25). Retrieved from https://papersowl.com/examples/the-negative-impacts-of-the-war-on-drugs/

The Global War on Drugs

Performance-Enhancing Drugs: the War on Drugs

The War on Drugs and its Impact on the United States

Legalization or War on Drugs