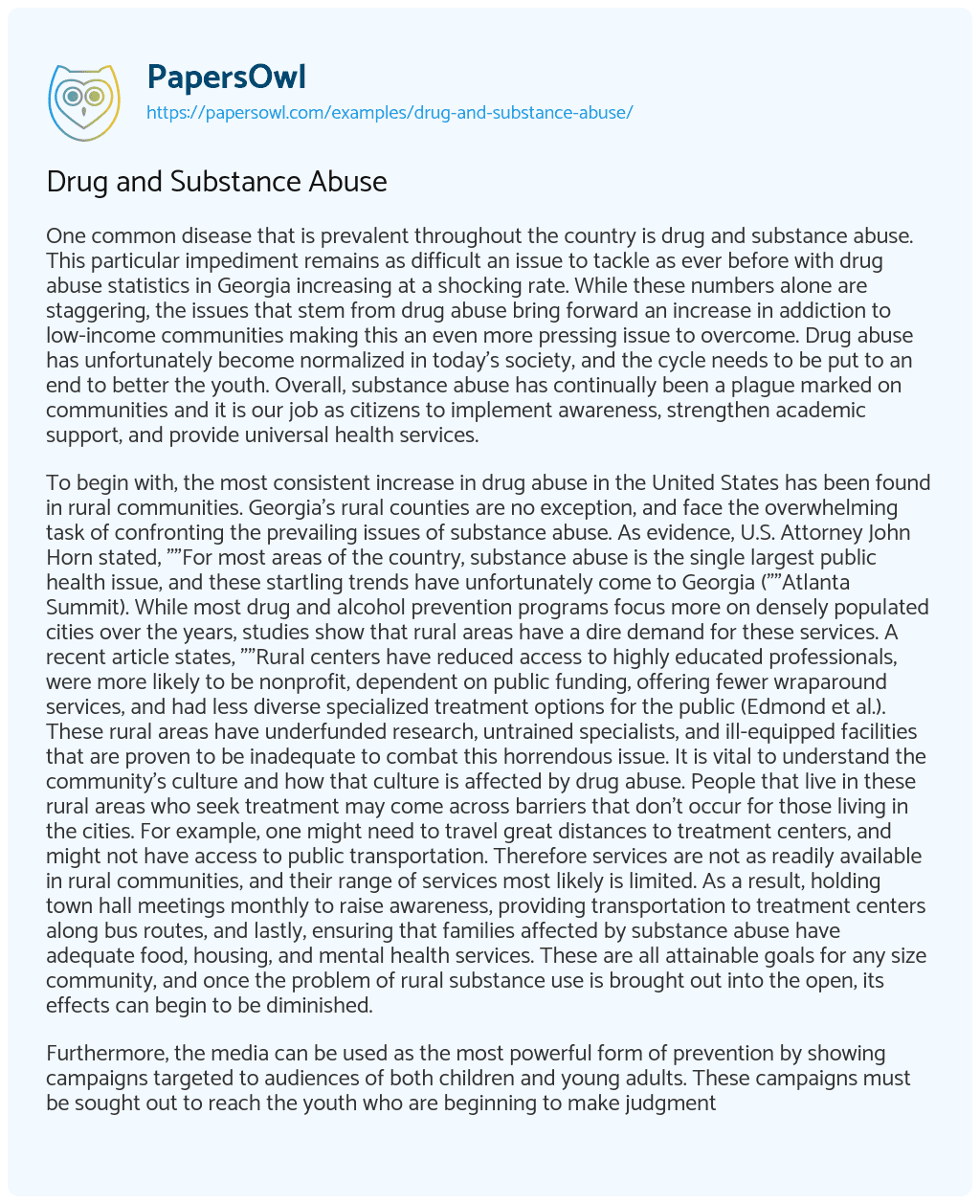 One common disease that is prevalent throughout the country is drug and substance abuse. This particular impediment remains as difficult an issue to tackle as ever before with drug abuse statistics in Georgia increasing at a shocking rate. While these numbers alone are staggering, the issues that stem from drug abuse bring forward an increase in addiction to low-income communities making this an even more pressing issue to overcome. Drug abuse has unfortunately become normalized in today’s society, and the cycle needs to be put to an end to better the youth. Overall, substance abuse has continually been a plague marked on communities and it is our job as citizens to implement awareness, strengthen academic support, and provide universal health services.

To begin with, the most consistent increase in drug abuse in the United States has been found in rural communities. Georgia’s rural counties are no exception, and face the overwhelming task of confronting the prevailing issues of substance abuse. As evidence, U.S. Attorney John Horn stated, “”For most areas of the country, substance abuse is the single largest public health issue, and these startling trends have unfortunately come to Georgia (“”Atlanta Summit). While most drug and alcohol prevention programs focus more on densely populated cities over the years, studies show that rural areas have a dire demand for these services. A recent article states, “”Rural centers have reduced access to highly educated professionals, were more likely to be nonprofit, dependent on public funding, offering fewer wraparound services, and had less diverse specialized treatment options for the public (Edmond et al.). These rural areas have underfunded research, untrained specialists, and ill-equipped facilities that are proven to be inadequate to combat this horrendous issue. It is vital to understand the community’s culture and how that culture is affected by drug abuse. People that live in these rural areas who seek treatment may come across barriers that don’t occur for those living in the cities. For example, one might need to travel great distances to treatment centers, and might not have access to public transportation. Therefore services are not as readily available in rural communities, and their range of services most likely is limited. As a result, holding town hall meetings monthly to raise awareness, providing transportation to treatment centers along bus routes, and lastly, ensuring that families affected by substance abuse have adequate food, housing, and mental health services. These are all attainable goals for any size community, and once the problem of rural substance use is brought out into the open, its effects can begin to be diminished.

Furthermore, the media can be used as the most powerful form of prevention by showing campaigns targeted to audiences of both children and young adults. These campaigns must be sought out to reach the youth who are beginning to make judgment calls on their own with alcohol, tobacco, and other substances as they mature. These community prevention programs should reach populations in multiple settings throughout schools, church-related clubs, and most importantly, the media. As evidence, research has shown that prevention programs that use the media to raise public awareness of the severity involved in substance abuse among communities are proven to work (Robertson). Those campaigns should be most effective when they are shown as public service announcements calling concern to the public. They should highlight the “”exit”” grades of elementary school (typically grades five and six), to reinforce students’ intentions not to mishandle alcohol or drugs and to teach specific skills for coping with social pressures to do so. For young teens, the emphasis should be on gateway substances whose use comes earlier in the typical sequence of substance use specifically, tobacco, alcohol, and marijuana. Experimentation with alcohol and illegal drugs will likely be introduced during these years and turned into a habitual routine for many American youths. The longer it can be put off, however, the less likely a young person is to discover the monster that is hiding behind the face of drugs.

Moreover, young people face countless life challenges, one of which can be peer pressure that can affect their mental health and as a result cause them to use or abuse alcohol and other drugs. Finding an easy fix often seems easier than facing the real problem and dealing with it. Schools and campuses should be a safe place for them to grow and learn not to pick up glorified vices. It is imperative that school officials offer a number of mental health and substance use prevention programs. Otherwise, schools and campuses will only face challenging public health issues such as violence, alcohol use, and drug abuse. As a result, on January 16, 2013, Barack Obama released the “”Now Is The Time plan, which “”outlines how the nation can better support the behavioral and mental health needs of young people (“”SAMHSA). The “”Now Is The Time Project “”builds and expands the capacity of state and local educational agencies to increase awareness of mental health and substance use issues among school-age youth”” including Georgia (“”SAMHSA). Similarly, SAMHSA (Substance Abuse and Mental Service Administration) has played an active role in supporting activities outlined in the plan, including funding new grant programs to promote mental health and emotional development among the youth and to prevent violence and substance use in schools and on campuses. These precautions are proven to “”increase protective factors that promote mental health and reduce risk factors for substance abuse (“”SAMHSA). Such initiatives put emphasis on substance abuse at the top of the list for government officials.

Understanding the root cause of drug addiction is one of the best ways to improve treatment options and outcomes of drug addiction in the future. Prevention is always better than finding a solution to a future problem. It is always the best option to deter people from drug abuse. Though it is practically impossible to prevent everyone from using drugs, there are things we can do to avoid drug addiction. Child-serving systems need to intervene early in the lives of youth to prevent or treat abuse, support young people, and provide them with the tools to choose the right path. An increase in awareness and campaigns throughout schools and communities can help prevent future addicts and can aid those currently fighting addiction and substance abuse. While these rising rates of substance abuse are not simply a problem faced by individual citizens, but rather an issue for the entire state of Georgia. These different actions must be taken immediately to effectively fight those issues in the attempt to save the upcoming youth.

Drug and Alcohol Abuse in US