Views on the US Overseas Expansion 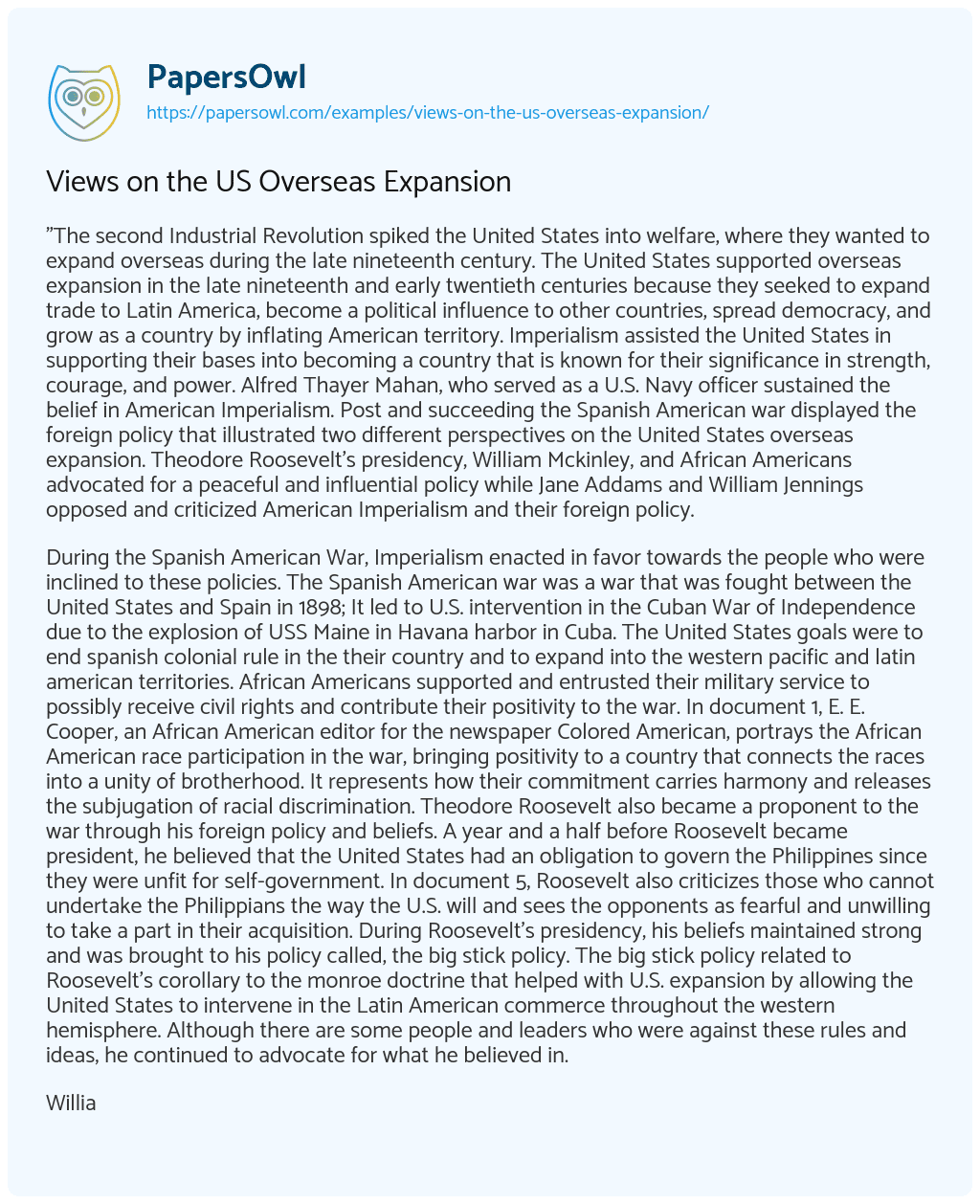 “The second Industrial Revolution spiked the United States into welfare, where they wanted to expand overseas during the late nineteenth century. The United States supported overseas expansion in the late nineteenth and early twentieth centuries because they seeked to expand trade to Latin America, become a political influence to other countries, spread democracy, and grow as a country by inflating American territory. Imperialism assisted the United States in supporting their bases into becoming a country that is known for their significance in strength, courage, and power. Alfred Thayer Mahan, who served as a U.S. Navy officer sustained the belief in American Imperialism. Post and succeeding the Spanish American war displayed the foreign policy that illustrated two different perspectives on the United States overseas expansion. Theodore Roosevelt’s presidency, William Mckinley, and African Americans advocated for a peaceful and influential policy while Jane Addams and William Jennings opposed and criticized American Imperialism and their foreign policy.

During the Spanish American War, Imperialism enacted in favor towards the people who were inclined to these policies. The Spanish American war was a war that was fought between the United States and Spain in 1898; It led to U.S. intervention in the Cuban War of Independence due to the explosion of USS Maine in Havana harbor in Cuba. The United States goals were to end spanish colonial rule in the their country and to expand into the western pacific and latin american territories. African Americans supported and entrusted their military service to possibly receive civil rights and contribute their positivity to the war. In document 1, E. E. Cooper, an African American editor for the newspaper Colored American, portrays the African American race participation in the war, bringing positivity to a country that connects the races into a unity of brotherhood. It represents how their commitment carries harmony and releases the subjugation of racial discrimination. Theodore Roosevelt also became a proponent to the war through his foreign policy and beliefs. A year and a half before Roosevelt became president, he believed that the United States had an obligation to govern the Philippines since they were unfit for self-government. In document 5, Roosevelt also criticizes those who cannot undertake the Philippians the way the U.S. will and sees the opponents as fearful and unwilling to take a part in their acquisition. During Roosevelt’s presidency, his beliefs maintained strong and was brought to his policy called, the big stick policy. The big stick policy related to Roosevelt’s corollary to the monroe doctrine that helped with U.S. expansion by allowing the United States to intervene in the Latin American commerce throughout the western hemisphere. Although there are some people and leaders who were against these rules and ideas, he continued to advocate for what he believed in.

William Mckinley, the 25th president of the United States led the U.S. into war with Spain and stated his attributions in acquiring the Philippines in 1899. He also urged Imperialism and held a religious concept to his thought process in deciding to annex the Philippines. In document 3, President McKinley describes to a church delegation how he was guided into his final resolution by stating all the options available and his opinion on each. McKinley reached into a religious stance by asking God for light and guidance into the right say. He believed that the Philippines were unfit for self-government and it would be shameful to give them over to any other country. Therefore, he was resolute in taking the Philippines himself to educate, civilize, and christianize them through faith. Manifest Destiny was believed that the United States was destined by God to expand and spread capitalism and democracy across North America. As a result, William McKinley also led the United States to a peace treaty, which declares that Spain gave up Guam, Puerto Rico, its possessions in the West Indies, and the Philippians for a payment of 20 million dollars.

Americans such as Jane Addams and William Jennings were ones to oppose the United States overseas expansion in the late nineteenth and early twentieth centuries. Jane Addams was an American activist, social worker, protestor, author, and leader in women’s suffrage. She is a founder of the the social gospel movement that included Addams Hull-House in Chicago, founded in 1889. In document 4, Addams gave a humanitarian viewpoint on Imperialism. She addressed those who supported her standpoint of social reform and peace. In this document, she criticizes the Spanish American war and its militarism incorporated in it. She states how the United States of America did not create ideals of peace after the war, but only inputted violence instead. After the war, the humane instinct turned into a savage one, as it was not likely before the war occured. As Jane Addams believed, perhaps the Spanish American war could have been the start to cruel motives within Americans in Chicago. Advocates who went against American Imperialism believe in ending colonialism such as William Jennings Bryan. William Jennings Bryan is aligned with the democrats but is considered a populist because he is encouraging in Populist ideas. Jennings made a speech to campaign for his presidency in 1900. He affirmed in the idea that an empire is a nation under varying forms of government rather than a government that has credit in political control over another country. Jennings believes that the people’s motives as foreigners are not the same as those we are not foregnors. In document 6, he states for his campaign that colonialism should be abolished and that it has not been beneficial in any aspect. Although he is critical of condemning the United States acquisition to the Philippines, he also denounces having Philippines as citizens. These opposers beliefs no longer represented the originated ideals of the United States.
The reason the United States had attempted to impact other countries is for economic, military and moral purposes. The United States overseas expansion in the late nineteenth and twentieth century had both contrasting and strong convictions on America.”

Views on the US Overseas Expansion. (2021, Apr 24). Retrieved from https://papersowl.com/examples/views-on-the-us-overseas-expansion/