Viewpoint of a Newly Wedded Mother in the Yellow Wallpaper 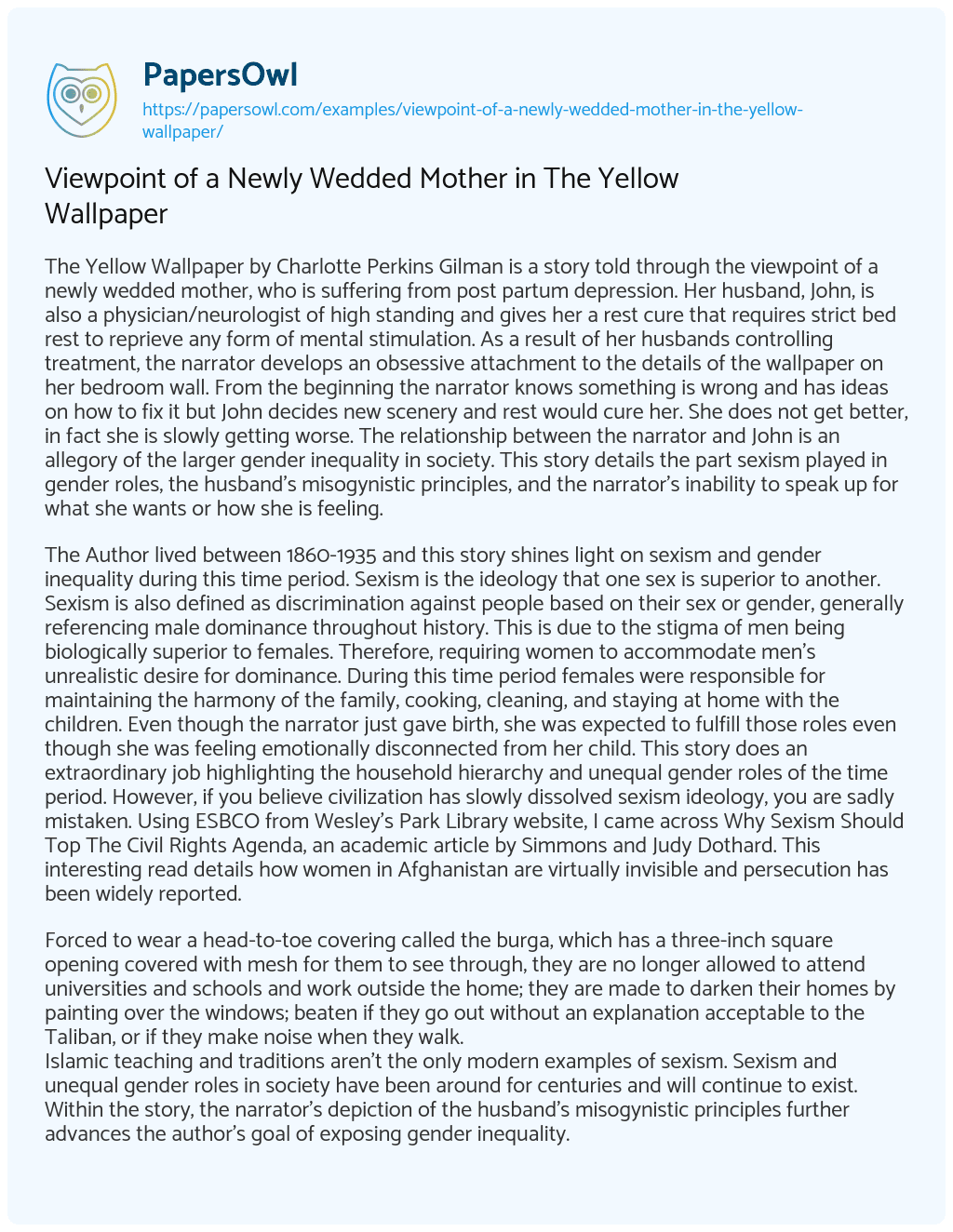 The Yellow Wallpaper by Charlotte Perkins Gilman is a story told through the viewpoint of a newly wedded mother, who is suffering from post partum depression. Her husband, John, is also a physician/neurologist of high standing and gives her a rest cure that requires strict bed rest to reprieve any form of mental stimulation. As a result of her husbands controlling treatment, the narrator develops an obsessive attachment to the details of the wallpaper on her bedroom wall. From the beginning the narrator knows something is wrong and has ideas on how to fix it but John decides new scenery and rest would cure her. She does not get better, in fact she is slowly getting worse. The relationship between the narrator and John is an allegory of the larger gender inequality in society. This story details the part sexism played in gender roles, the husband’s misogynistic principles, and the narrator’s inability to speak up for what she wants or how she is feeling.

The Author lived between 1860-1935 and this story shines light on sexism and gender inequality during this time period. Sexism is the ideology that one sex is superior to another. Sexism is also defined as discrimination against people based on their sex or gender, generally referencing male dominance throughout history. This is due to the stigma of men being biologically superior to females. Therefore, requiring women to accommodate men’s unrealistic desire for dominance. During this time period females were responsible for maintaining the harmony of the family, cooking, cleaning, and staying at home with the children. Even though the narrator just gave birth, she was expected to fulfill those roles even though she was feeling emotionally disconnected from her child. This story does an extraordinary job highlighting the household hierarchy and unequal gender roles of the time period. However, if you believe civilization has slowly dissolved sexism ideology, you are sadly mistaken. Using ESBCO from Wesley’s Park Library website, I came across Why Sexism Should Top The Civil Rights Agenda, an academic article by Simmons and Judy Dothard. This interesting read details how women in Afghanistan are virtually invisible and persecution has been widely reported.

Forced to wear a head-to-toe covering called the burga, which has a three-inch square opening covered with mesh for them to see through, they are no longer allowed to attend universities and schools and work outside the home; they are made to darken their homes by painting over the windows; beaten if they go out without an explanation acceptable to the Taliban, or if they make noise when they walk.
Islamic teaching and traditions aren’t the only modern examples of sexism. Sexism and unequal gender roles in society have been around for centuries and will continue to exist. Within the story, the narrator’s depiction of the husband’s misogynistic principles further advances the author’s goal of exposing gender inequality.

While the narrator is depressed, john dismisses her opinions and belittles her at every turn. He acts as though her inferiority leaves her in a state of childlike dependence. John does not even acknowledge that his wife may have a metal problem and all attempts made by the narrator to talk to John fail. He laughs when told about the wallpaper, making it impossible for her to convince him to change her diagnosis or treatment. John constantly diminishes her self worth by referring to her as a little girl. What is it, little girl? John said. Don’t go walking about like that- you’ll get cold (Gilman 222). John speaks to the narrator as though she is incapable of taking care of herself.

Although she challenges her husbands rest treatment, she does not speak up because John is the man, the doctor, and therefore has the authority. The narrator lacks the courage to assert herself over him even though his isolation treatment is harming her. This is due to their unequal power positions in the relationship. Denied of a sense of meaning and purpose, the narrators mind begins to deteriorate. Her sanity retreats as her delusions with the shadows in the wallpaper become her reality. Ultimately the narrator elects to stay in her unhealthily situation and slowly descends into insanity.

The yellow wallpaper was truly a story ahead of its time. Drawing attention to sexism in our culture and the effects of unequal gender roles. To some it may seem like she gave up, but truthfully she escaped the prison she was occupying. For being written in the early 1900’s, the author was a true revolutionary.

Viewpoint of a Newly Wedded Mother in The Yellow Wallpaper. (2019, Nov 09). Retrieved from https://papersowl.com/examples/viewpoint-of-a-newly-wedded-mother-in-the-yellow-wallpaper/