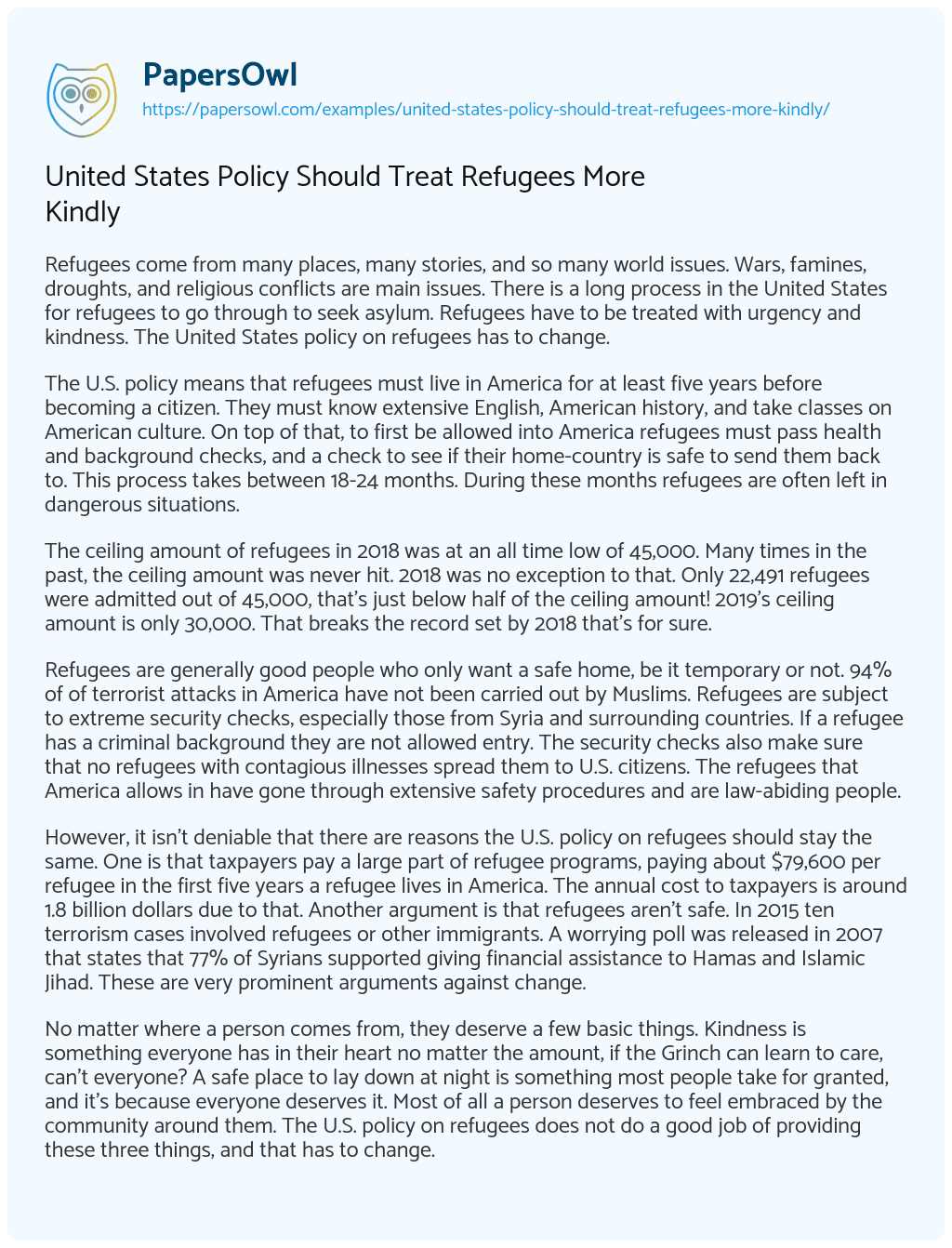 Refugees come from many places, many stories, and so many world issues. Wars, famines, droughts, and religious conflicts are main issues. There is a long process in the United States for refugees to go through to seek asylum. Refugees have to be treated with urgency and kindness. The United States policy on refugees has to change.

The U.S. policy means that refugees must live in America for at least five years before becoming a citizen. They must know extensive English, American history, and take classes on American culture. On top of that, to first be allowed into America refugees must pass health and background checks, and a check to see if their home-country is safe to send them back to. This process takes between 18-24 months. During these months refugees are often left in dangerous situations.

Refugees are generally good people who only want a safe home, be it temporary or not. 94% of of terrorist attacks in America have not been carried out by Muslims. Refugees are subject to extreme security checks, especially those from Syria and surrounding countries. If a refugee has a criminal background they are not allowed entry. The security checks also make sure that no refugees with contagious illnesses spread them to U.S. citizens. The refugees that America allows in have gone through extensive safety procedures and are law-abiding people.

However, it isn’t deniable that there are reasons the U.S. policy on refugees should stay the same. One is that taxpayers pay a large part of refugee programs, paying about $79,600 per refugee in the first five years a refugee lives in America. The annual cost to taxpayers is around 1.8 billion dollars due to that. Another argument is that refugees aren’t safe. In 2015 ten terrorism cases involved refugees or other immigrants. A worrying poll was released in 2007 that states that 77% of Syrians supported giving financial assistance to Hamas and Islamic Jihad. These are very prominent arguments against change.

No matter where a person comes from, they deserve a few basic things. Kindness is something everyone has in their heart no matter the amount, if the Grinch can learn to care, can’t everyone? A safe place to lay down at night is something most people take for granted, and it’s because everyone deserves it. Most of all a person deserves to feel embraced by the community around them. The U.S. policy on refugees does not do a good job of providing these three things, and that has to change.

Comparative Analysis (The United States of America and Texas States)