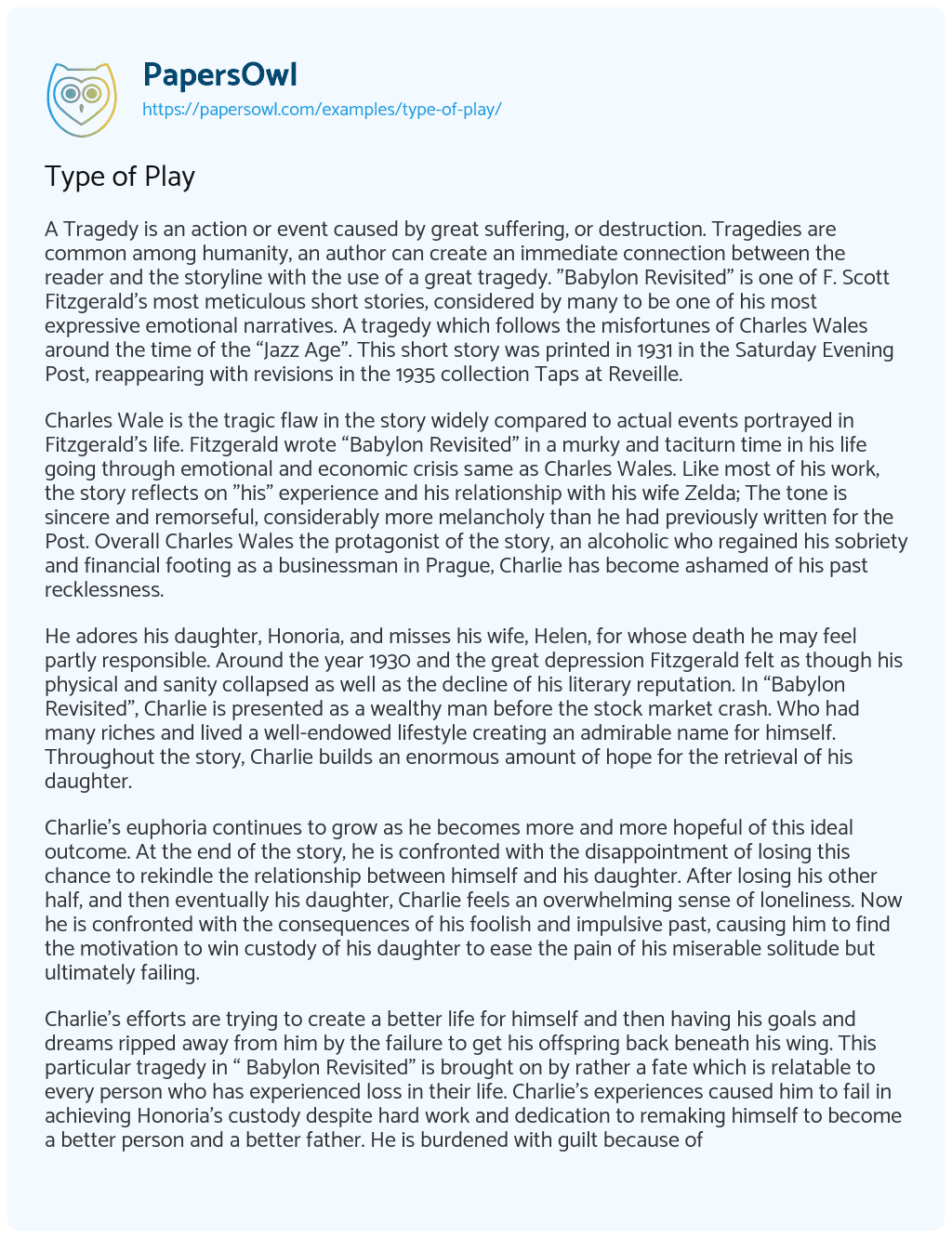 A Tragedy is an action or event caused by great suffering, or destruction. Tragedies are common among humanity, an author can create an immediate connection between the reader and the storyline with the use of a great tragedy. “Babylon Revisited” is one of F. Scott Fitzgerald’s most meticulous short stories, considered by many to be one of his most expressive emotional narratives. A tragedy which follows the misfortunes of Charles Wales around the time of the “Jazz Age”. This short story was printed in 1931 in the Saturday Evening Post, reappearing with revisions in the 1935 collection Taps at Reveille.

Charles Wale is the tragic flaw in the story widely compared to actual events portrayed in Fitzgerald’s life. Fitzgerald wrote “Babylon Revisited” in a murky and taciturn time in his life going through emotional and economic crisis same as Charles Wales. Like most of his work, the story reflects on “his” experience and his relationship with his wife Zelda; The tone is sincere and remorseful, considerably more melancholy than he had previously written for the Post. Overall Charles Wales the protagonist of the story, an alcoholic who regained his sobriety and financial footing as a businessman in Prague, Charlie has become ashamed of his past recklessness.

He adores his daughter, Honoria, and misses his wife, Helen, for whose death he may feel partly responsible. Around the year 1930 and the great depression Fitzgerald felt as though his physical and sanity collapsed as well as the decline of his literary reputation. In “Babylon Revisited”, Charlie is presented as a wealthy man before the stock market crash. Who had many riches and lived a well-endowed lifestyle creating an admirable name for himself. Throughout the story, Charlie builds an enormous amount of hope for the retrieval of his daughter.

Charlie’s euphoria continues to grow as he becomes more and more hopeful of this ideal outcome. At the end of the story, he is confronted with the disappointment of losing this chance to rekindle the relationship between himself and his daughter. After losing his other half, and then eventually his daughter, Charlie feels an overwhelming sense of loneliness. Now he is confronted with the consequences of his foolish and impulsive past, causing him to find the motivation to win custody of his daughter to ease the pain of his miserable solitude but ultimately failing.

Charlie’s efforts are trying to create a better life for himself and then having his goals and dreams ripped away from him by the failure to get his offspring back beneath his wing. This particular tragedy in “ Babylon Revisited” is brought on by rather a fate which is relatable to every person who has experienced loss in their life. Charlie’s experiences caused him to fail in achieving Honoria’s custody despite hard work and dedication to remaking himself to become a better person and a better father. He is burdened with guilt because of the past mistakes that caused him to lose his daughter, even though he made a fearless effort to rebuild his confidence. “Again the memory of those days swept over him like a nightmare . . .

The men who locked their wives out in the snow, because the snow of twenty-nine wasn’t real snow. If you didn’t want it to be snow, you just paid some money”. This quote provides the impression that Charlie blames himself, at least to some degree. We all sympathize with Charlie on the surface, we have all made mistakes that we have to live with. Charlie is attempting to move forward with his life and erase the mistakes of his past. The ghosts of his past torment him repeatedly throughout the story, his child’s guardians detest him, and his oldest friends do not comprehend him.

“Do what you like!” she cried, it could be indirectly perceived that Marion was about to say that she’d rather see Honoria dead than with Charlie, This manner of vulgar resentment for Charlie’s is what shift the reader toward Charlie’s side and away from Marion’s. “She’s your child. I’m not the person to stand in your way. I think if it were my child I’d rather see her – ” She managed to check herself. Within this basic emotional core, however, Fitzgerald dramatizes a universe of emotional, social, historical, and psychological themes.

The man is attempting to persuade the girl to have an abortion, however, the girl is undecided about it. The narrator also tells the story with a bare minimum amount of detail, focusing instead on the dialog between the two characters. Even in that sense, the dialog is merely the conversation back and forth, with little explanation or details. The narrator only will throw in a “she said” each few sentences, presumably to keep the reader on track with whom is speaking, but otherwise does not add any information.

This allows the reader to interpret the accurate meanings and feelings behind every word, without the influence of the narrator. The narrator provides a good insight through observing the boyfriend and girlfriend’s actions, and the boyfriend himself gives even further insight into the story. The story takes its tension from their brief, barbed dialogue. Throughout the story, it is clear that the gentleman would really like the lady to get the elective procedure, which he describes as “awfully simple,” “perfectly simple” and “not really an operation in the slightest degree.”

He assures he will remain along her side through the entire time and guarantees that they are going to be happy after as a result of the procedure. He never mentions the woman’s health, thus we will assume the operation is not one thing to cure a sickness. He additionally oftentimes says she does not have to do it if she does not wish to, that indicates that he is describing an elective procedure.

Even though she realizes the options, she has difficulties allowing go of previous habits, has low self-esteem that leads to her being submissive. Surely, should recognize the attainable harm she is potentially causing the baby to have if she keeps it, but it does not stop her from drinking. Some may arguethat this solely indicates that she remains not able to make adjustments fully yet. Even though she wants to change, perhaps her old ways, are holding her back from doing so. Maybe this explains why she drinks during her pregnancy.

Due to her submissive quality, she provides onto her lover regardless of her feelings. One of the explanations why she feels the necessity to guarantee his happiness lies in her concern of losing him. “And if I do it you’ll be happy and things will be like they were and you’ll love me?” Apparently, Jig is willing to sacrifice her will for his, if it means making him happy. She struggles on a choice between her mind and her heart.

Her mind is telling her to have the baby, but her heart is telling her the opposite-to go through the operation. It is a conclusion between her love for him and readiness to make him happy versus her self- interest to form the correct decision. Obviously, it is her low self- esteem that gears her towards giving in to him. “If I do it you won’t ever worry…then I’ll do it because I don’t care about me.” This quotes clearly shows how she is passive and submissive. Her weak flaw lies within the undeniable fact that she does not contemplate her feelings.

The main idea in this analysis is to prove that Jig and her partner are in the middle of a tragedy. Tragedy refers to the end of something such as the end of family or society as well as many other gloomy depictions. A tragedy rarely ends well, and we can make the assumption Jig did not keep the baby.