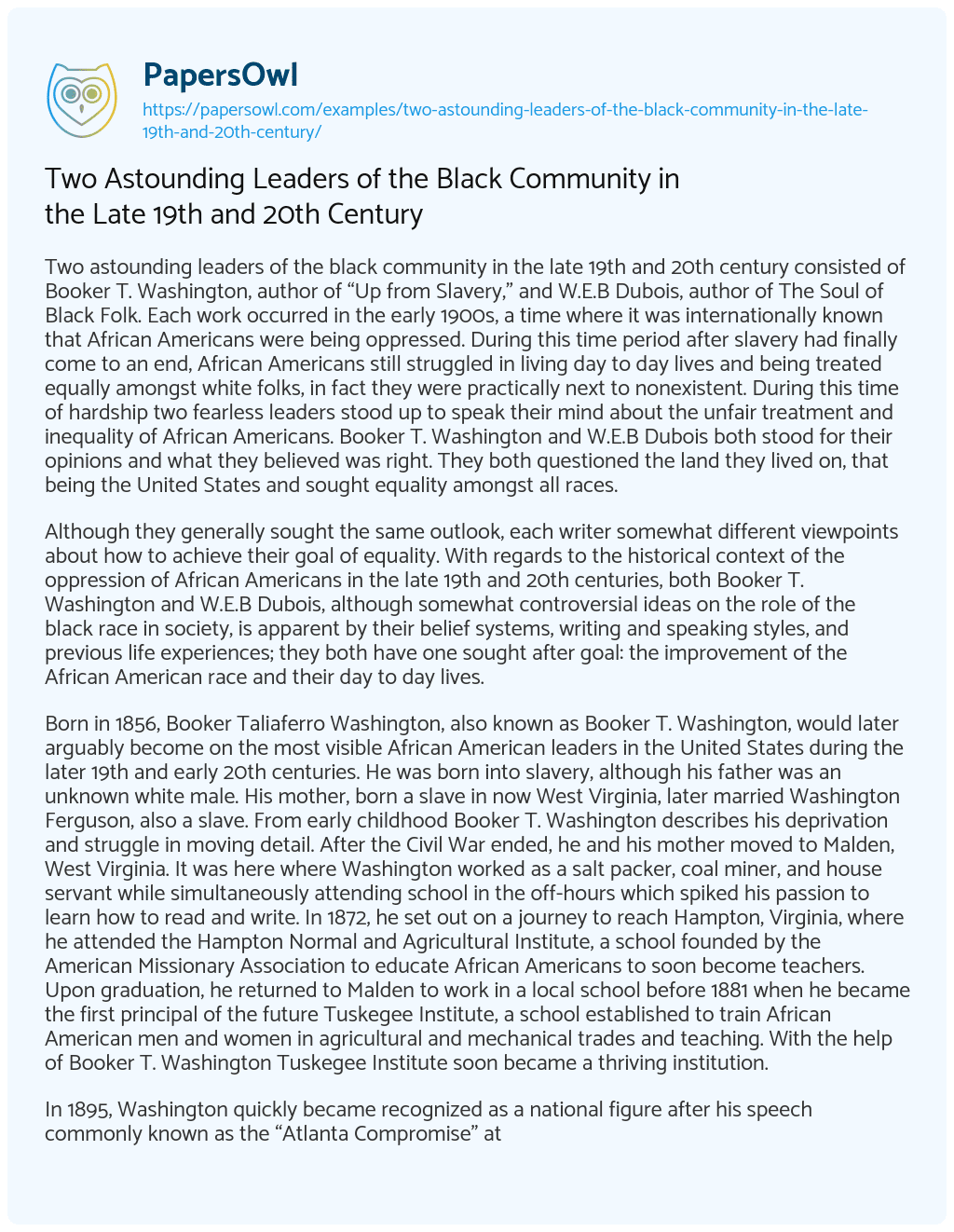 Two astounding leaders of the black community in the late 19th and 20th century consisted of Booker T. Washington, author of “Up from Slavery,” and W.E.B Dubois, author of The Soul of Black Folk. Each work occurred in the early 1900s, a time where it was internationally known that African Americans were being oppressed. During this time period after slavery had finally come to an end, African Americans still struggled in living day to day lives and being treated equally amongst white folks, in fact they were practically next to nonexistent. During this time of hardship two fearless leaders stood up to speak their mind about the unfair treatment and inequality of African Americans. Booker T. Washington and W.E.B Dubois both stood for their opinions and what they believed was right. They both questioned the land they lived on, that being the United States and sought equality amongst all races.

Although they generally sought the same outlook, each writer somewhat different viewpoints about how to achieve their goal of equality. With regards to the historical context of the oppression of African Americans in the late 19th and 20th centuries, both Booker T. Washington and W.E.B Dubois, although somewhat controversial ideas on the role of the black race in society, is apparent by their belief systems, writing and speaking styles, and previous life experiences; they both have one sought after goal: the improvement of the African American race and their day to day lives.

Born in 1856, Booker Taliaferro Washington, also known as Booker T. Washington, would later arguably become on the most visible African American leaders in the United States during the later 19th and early 20th centuries. He was born into slavery, although his father was an unknown white male. His mother, born a slave in now West Virginia, later married Washington Ferguson, also a slave. From early childhood Booker T. Washington describes his deprivation and struggle in moving detail. After the Civil War ended, he and his mother moved to Malden, West Virginia. It was here where Washington worked as a salt packer, coal miner, and house servant while simultaneously attending school in the off-hours which spiked his passion to learn how to read and write. In 1872, he set out on a journey to reach Hampton, Virginia, where he attended the Hampton Normal and Agricultural Institute, a school founded by the American Missionary Association to educate African Americans to soon become teachers. Upon graduation, he returned to Malden to work in a local school before 1881 when he became the first principal of the future Tuskegee Institute, a school established to train African American men and women in agricultural and mechanical trades and teaching. With the help of Booker T. Washington Tuskegee Institute soon became a thriving institution.

In 1895, Washington quickly became recognized as a national figure after his speech commonly known as the “Atlanta Compromise” at the Atlanta Exposition of 1895. Washington debated that African Americans should “defer the quest for immediate, full equality in return for basic economic opportunities (Norton, 469).” Washington stated, “In all thing that are purely social, we can be as separate as the fingers, yet one as the hand in all things essential to mutual progress” (469-470). Washington advocated for the economic uplift of African Americans trough an educational program of vocational training and for their peaceful incorporation into the American belief of hard work and upward mobility. He believed that if an individual was willing to work hard then they were worthy of being rewarded rather than African Americans being treated as an entire group or race. Booker T. Washington uses rhetoric in order to add emphasis and persuade the audience on certain aspects of parts of his speech. We can also see that in his speech he is looking for practical solution of problems at hand, a device known as pragmatic. Washington is favored by many listeners because he logically appeals to his audience.

On the other hand, W.E.B. DuBois was born in 1868, shortly after Washington, in Great Barrington, Massachusetts. His single mother raised him with the help of extended family after his father left her. As a child, Dubois attended majority white school and churches, which he later wrote that he never felt any discrimination there. After attending Fisk University in Nashville, Tennessee, he then attended Harvard to enhance his degree. Before returning yet again to Harvard to receive his Ph.D., he studied at the University of Berlin for two years and it was here where his studies and research began to influence his thinking about both race and his own personal history. Dubois was dedicated to the “Negro Problem” (559). He urged Americans to face the devastation that racial inequality was destroying the lives of African Americans. After writing multiple essays, he wrote The Souls of Black Folk, a book of signal importance in American intellectual history. In The Souls of Black Folk, Dubois combines an autobiography, social science, political commentary, musicology and even fiction in order to deeper understand the problem of the 20th century, the difference of the skin color. Although Dubois originally approved of Washington’ ideas and position on the color of one’s skin issue, The Souls of Black Folk, does not say so. In the book, Dubois begins to stray away from Washington’s ideas in order to advocate his own position on the internationally known oppression of African Americans.

Although both Booker T. Washington, author of “Up From Slavery,” and W.E.B Dubois, author of The Soul of Black Folk, both had one general goal in mind, the improvement of the African American race and their day to day lives, their means to do so were quite controversial. In the beginning both highly educated men questioned the land they lived on and tended to blame African Americans themselves for their condition. They placed great emphasis on helping one’s self and improving morally rather than their rights. Many aspects of their means of achieving this were quite drastically different, however. They disagreed on the strategies concerning voting rights, social shifts, education and the daily role of an African American in this time period in society that were to be used in order to gain this equality. Washington, born a southerner, wanted a gradual change as opposed to quite the opposite of Dubois, who wanted immediate action to take place.

A gradual change was going to quite some time in order to get to where African Americans should be treated equal in society. Booker T. Washington believed this was the accurate approach in order to take to achieve his goal of improving the lives of the African American race. Washington’s approach consisted greatly around his metaphor, “cast down your bucket where you are” (Washington 472). By the use of this metaphor he wants to illustrate there is an advantage about right where you are, even though you may not even realize it yet. This may be viewed as controversial because Washington doesn’t demand total equality amongst whites and black but just the right to prove themselves in society. He doesn’t mind that they are viewed separately and as part of their own race and culture, as long as they are treated equal when it comes to white versus blacks’ scenarios. Through the use of metaphors, specifically this one example, help to allow the audience to create imagery and try to make aspects of his speech clearer and more understandable to all listeners of many different backgrounds and ages.

On the other end of the spectrum, Dubois argued against this gradual change that Washington so much sought after. Instead, Dubois wanted immediate equality and action among all members of the African American race. He believed that Washington seemed to accept that the two races were separate and to settle for a low level of education in exchange for white “toleration” and economic cooperation, completely contradicting what Dubois wanted. Dubois writing style varies from that of Washington’s in that it provides a passionate, eloquent and assertive approach rather than that of Washington’s. Dubois’s use of sarcasm also adds to the effect of his overall literary style. Dubois makes the reader put themselves in his shoes to see it from a first-person objective. Through the use of irony, Dubois uses the imagery of the viel in order to represent the social divide, skin color and two opposing viewpoints. Dubois feels as though he has a “double-consciousness,” one that represents a “sense of always looking at one’s self through the eyes of others, of measuring one’s soul by the tape of a world that looks on in amused contempt and pity” (Dubois 563). This psychological idea is a representation of feeling like having two social identities. Dubois is trying to analyze the situations and realizes the psychological and social divide in American society. It was then on Dubois disagreed on the strategies concerning voting rights of an African American in order to gain immediate equality.

Voting rights was one topic in particular that caused a great disagreement between Washington and Dubois. Washington believed that African Americans needed to gradually earn their rights by proving themselves in society economically in order to better themselves in the world. Dubois on the other hand was infuriated with Washington’s passive approach. Dubois despised racial injustice and inequality. His platform was based upon the right to full equality, whether that come to voting rights, social or economic rights, educations, etc. Dubois demanded full equality amongst both races and their rights. Dubois wanted it right then and now versus Washington believed that in order to achieve equality, one must dedicate themselves to the hard work that comes along with it in order to achieve equal voting privileges.

Two Astounding Leaders of the Black Community in the Late 19th and 20th Century. (2021, Mar 16). Retrieved from https://papersowl.com/examples/two-astounding-leaders-of-the-black-community-in-the-late-19th-and-20th-century/

Social Problems that Existed in 19th a 20th Century