Transgender Bathroom Bill: Support it or against It? 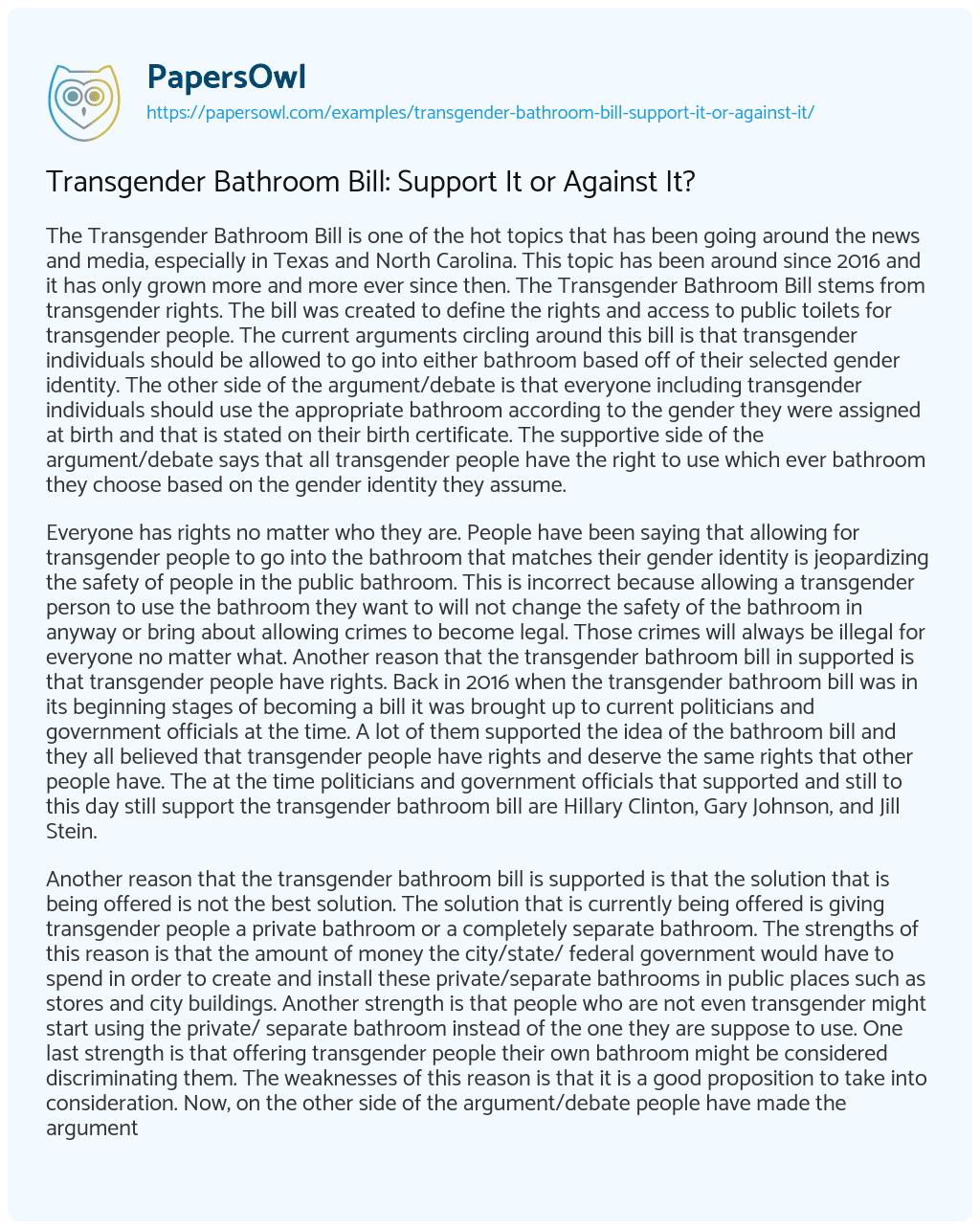 The Transgender Bathroom Bill is one of the hot topics that has been going around the news and media, especially in Texas and North Carolina. This topic has been around since 2016 and it has only grown more and more ever since then. The Transgender Bathroom Bill stems from transgender rights. The bill was created to define the rights and access to public toilets for transgender people. The current arguments circling around this bill is that transgender individuals should be allowed to go into either bathroom based off of their selected gender identity. The other side of the argument/debate is that everyone including transgender individuals should use the appropriate bathroom according to the gender they were assigned at birth and that is stated on their birth certificate. The supportive side of the argument/debate says that all transgender people have the right to use which ever bathroom they choose based on the gender identity they assume.

Another reason that the transgender bathroom bill is supported is that the solution that is being offered is not the best solution. The solution that is currently being offered is giving transgender people a private bathroom or a completely separate bathroom. The strengths of this reason is that the amount of money the city/state/ federal government would have to spend in order to create and install these private/separate bathrooms in public places such as stores and city buildings. Another strength is that people who are not even transgender might start using the private/ separate bathroom instead of the one they are suppose to use. One last strength is that offering transgender people their own bathroom might be considered discriminating them. The weaknesses of this reason is that it is a good proposition to take into consideration. Now, on the other side of the argument/debate people have made the argument of what would be put on the door if the bathroom bill was to passed and approved. The strengths of this argument is that the city/state where the bathroom room bill is approved, the amount of money it would take to create a new design for the public bathrooms. The weaknesses of this argument is that the city/state and/or country wouldn’t really have to create a universal design for public bathrooms. They can replace the signs with the family bathroom sign or with a unique and/or basic sign that may say “everyone” or “gender neutral”.

Another argument that is made against the transgender bathroom bill is the concern about the safety and privacy of a public bathroom. The weaknesses of this argument is that, yes people might feel uncomfortable seeing a person that physically looks like the opposite gender walks into the bathroom. Both the men’s bathroom and women’s bathroom have stalls with doors which still maintains your privacy. Also the safety of the bathroom isn’t compromised if you allow transgender people to go into the bathroom they feel comfortable with. If they wouldn’t do anything bad in the bathroom they had to go in based on the gender they were assigned at birth then why would that change all of a sudden.

Another argument that is being made against the transgender bathroom bill is the tradition of the bathroom. What this means is changing the way the public bathrooms work/function. One weakness of this argument is that this argument is built upon opinions and/or feelings and not facts. In order for this argument to be valid there needs to be some type of social experiment conducted on the public in different places around the United States to get an accurate survey pool or opinions. Another weakness of this argument is that people are saying that changing the fact that there has always been a men’s bathroom and a woman’s bathroom would be causing unnecessary problems. I personally can not see the underlying problems that would be brought to the surface if allowing transgender people to use the bathroom they feel comfortable using.

One last argument that is being made against the transgender bathroom bill is the logistics of it all. This means the laws circling public restrooms and the which restroom people should go into. The weakness of this argument is that if we see someone enter the wrong bathroom, what are suppose to do. There are people out there in the world that may look more like the opposite gender even though they are male/female. So we can’t tell them they are going into the wrong bathroom based off the way they look when we do not know there gender. After conducting my own research about the transgender bathroom bill I know my position of the whole debate/argument. My position is on the supportive side of the argument/debate because the arguments against the bell either have an easy solution or they are invalid. The side that is supporting the bill makes really strong and valid arguments. A lot of politicians support transgender people, their rights, and the bathroom bill.

One of the politicians that supports this issue is former first lady, Hillary Clinton. Even though through out the years of her being a well known politician she has never mentioned the transgender bathroom bill by name, she has supported the Obama Administration when the rights of LGBTQ people came up in meetings and/or conversations. Also there are not really a lot of politicians and/or government officials on the side against the transgender bathroom bill but some of the polictians/ government officials are unclear on where they stand with just the whole transgender rights.

Transgender Bathroom Bill: Support It or Against It?. (2020, Apr 07). Retrieved from https://papersowl.com/examples/transgender-bathroom-bill-support-it-or-against-it/