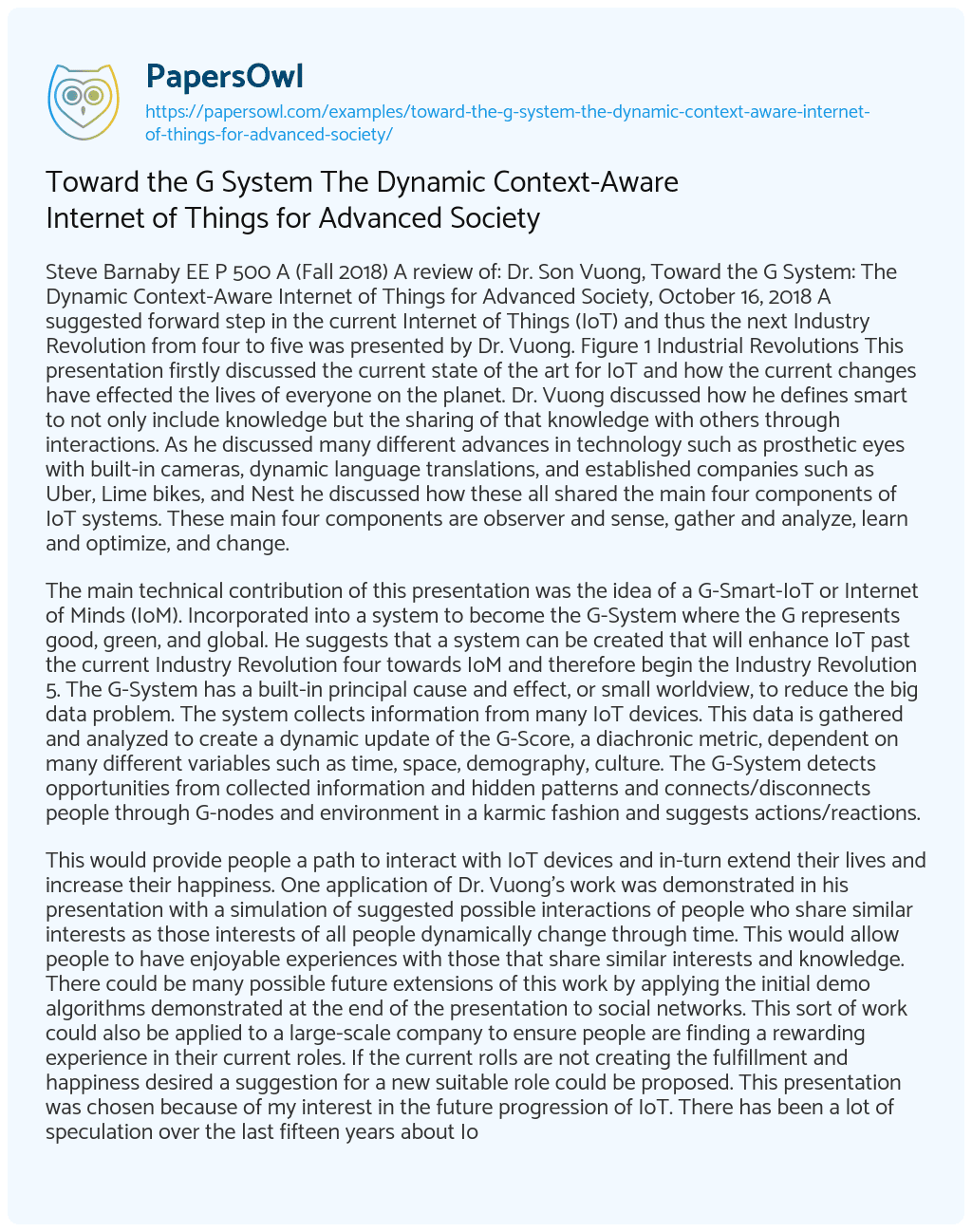 Steve Barnaby EE P 500 A (Fall 2018) A review of: Dr. Son Vuong, Toward the G System: The Dynamic Context-Aware Internet of Things for Advanced Society, October 16, 2018 A suggested forward step in the current Internet of Things (IoT) and thus the next Industry Revolution from four to five was presented by Dr. Vuong. Figure 1 Industrial Revolutions This presentation firstly discussed the current state of the art for IoT and how the current changes have effected the lives of everyone on the planet. Dr. Vuong discussed how he defines smart to not only include knowledge but the sharing of that knowledge with others through interactions. As he discussed many different advances in technology such as prosthetic eyes with built-in cameras, dynamic language translations, and established companies such as Uber, Lime bikes, and Nest he discussed how these all shared the main four components of IoT systems. These main four components are observer and sense, gather and analyze, learn and optimize, and change.

The main technical contribution of this presentation was the idea of a G-Smart-IoT or Internet of Minds (IoM). Incorporated into a system to become the G-System where the G represents good, green, and global. He suggests that a system can be created that will enhance IoT past the current Industry Revolution four towards IoM and therefore begin the Industry Revolution 5. The G-System has a built-in principal cause and effect, or small worldview, to reduce the big data problem. The system collects information from many IoT devices. This data is gathered and analyzed to create a dynamic update of the G-Score, a diachronic metric, dependent on many different variables such as time, space, demography, culture. The G-System detects opportunities from collected information and hidden patterns and connects/disconnects people through G-nodes and environment in a karmic fashion and suggests actions/reactions.

This would provide people a path to interact with IoT devices and in-turn extend their lives and increase their happiness. One application of Dr. Vuong’s work was demonstrated in his presentation with a simulation of suggested possible interactions of people who share similar interests as those interests of all people dynamically change through time. This would allow people to have enjoyable experiences with those that share similar interests and knowledge. There could be many possible future extensions of this work by applying the initial demo algorithms demonstrated at the end of the presentation to social networks. This sort of work could also be applied to a large-scale company to ensure people are finding a rewarding experience in their current roles. If the current rolls are not creating the fulfillment and happiness desired a suggestion for a new suitable role could be proposed. This presentation was chosen because of my interest in the future progression of IoT. There has been a lot of speculation over the last fifteen years about IoT, the potential future of machine learning algorithms, big data, and applications for our lives.

I was interested in hearing about what might be next and how people are envisioning resolving current issues with IoT and the slower than expected adoption. The presentation did speculate on the next evolution of IoT, how machine learning might change, and hopefully applications to our lives by taking a holistic view of the problem with NeuroScience, Social-Para Psychology, and Cognitive Science. This was a new view for me and I am glad to learn about it. However, no current issues of IoT, such as large data set processing, lack of low-cost devices, power for remote devices, and long-range wireless communication were discussed.

Toward the G System The Dynamic Context-Aware Internet of Things for Advanced Society. (2020, Mar 17). Retrieved from https://papersowl.com/examples/toward-the-g-system-the-dynamic-context-aware-internet-of-things-for-advanced-society/

The Internet of Things (IoT)

History of Internet of Things

The Power of Blockchain Paired with the Internet of Things

Exploiting Internet of Things and its Application in Healthcare Domain