The Power of Blockchain Paired with the Internet of Things 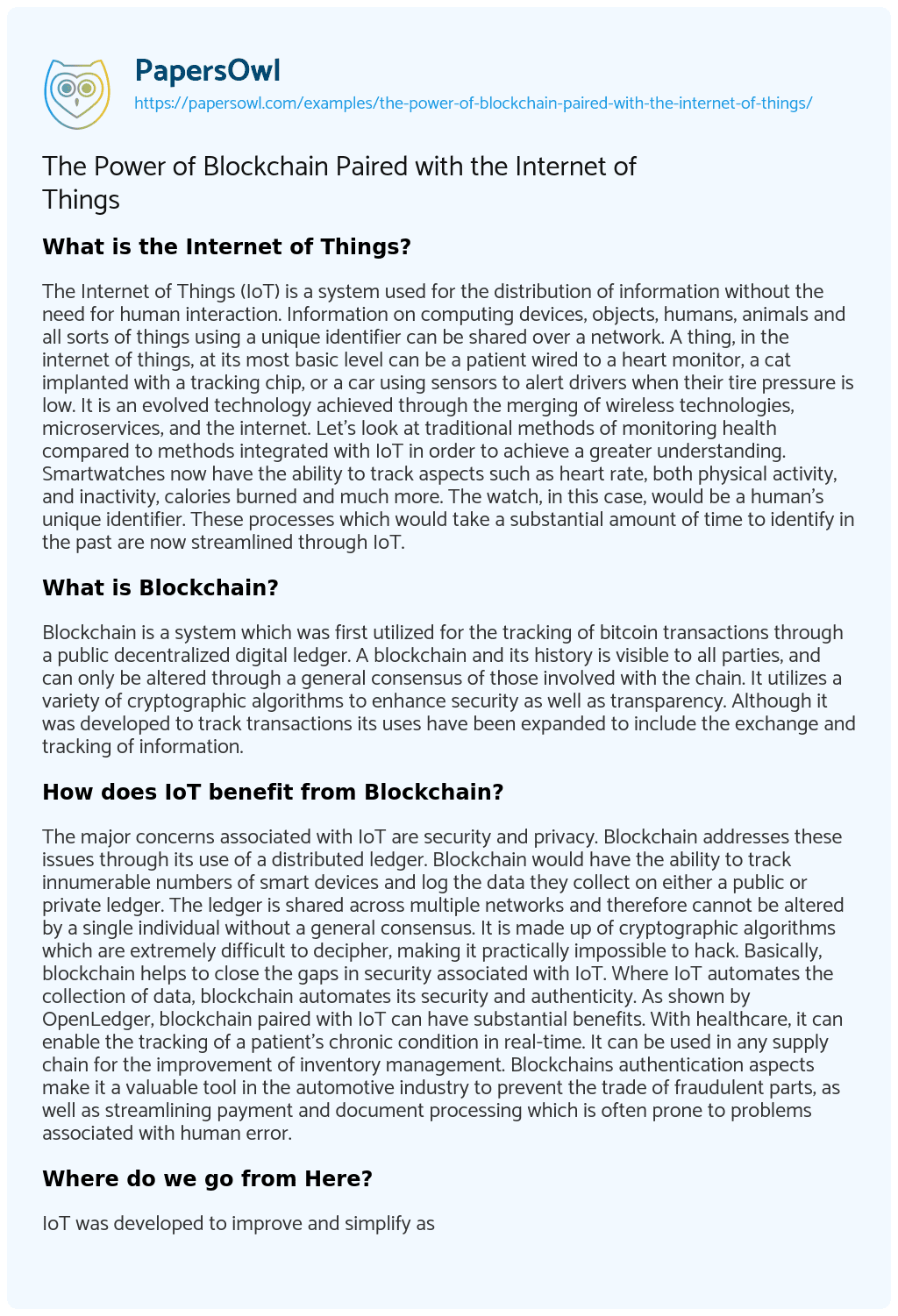 What is the Internet of Things?

The Internet of Things (IoT) is a system used for the distribution of information without the need for human interaction. Information on computing devices, objects, humans, animals and all sorts of things using a unique identifier can be shared over a network. A thing, in the internet of things, at its most basic level can be a patient wired to a heart monitor, a cat implanted with a tracking chip, or a car using sensors to alert drivers when their tire pressure is low. It is an evolved technology achieved through the merging of wireless technologies, microservices, and the internet. Let’s look at traditional methods of monitoring health compared to methods integrated with IoT in order to achieve a greater understanding. Smartwatches now have the ability to track aspects such as heart rate, both physical activity, and inactivity, calories burned and much more. The watch, in this case, would be a human’s unique identifier. These processes which would take a substantial amount of time to identify in the past are now streamlined through IoT.

Blockchain is a system which was first utilized for the tracking of bitcoin transactions through a public decentralized digital ledger. A blockchain and its history is visible to all parties, and can only be altered through a general consensus of those involved with the chain. It utilizes a variety of cryptographic algorithms to enhance security as well as transparency. Although it was developed to track transactions its uses have been expanded to include the exchange and tracking of information.

How does IoT benefit from Blockchain?

The major concerns associated with IoT are security and privacy. Blockchain addresses these issues through its use of a distributed ledger. Blockchain would have the ability to track innumerable numbers of smart devices and log the data they collect on either a public or private ledger. The ledger is shared across multiple networks and therefore cannot be altered by a single individual without a general consensus. It is made up of cryptographic algorithms which are extremely difficult to decipher, making it practically impossible to hack. Basically, blockchain helps to close the gaps in security associated with IoT. Where IoT automates the collection of data, blockchain automates its security and authenticity. As shown by OpenLedger, blockchain paired with IoT can have substantial benefits. With healthcare, it can enable the tracking of a patient’s chronic condition in real-time. It can be used in any supply chain for the improvement of inventory management. Blockchains authentication aspects make it a valuable tool in the automotive industry to prevent the trade of fraudulent parts, as well as streamlining payment and document processing which is often prone to problems associated with human error.

Where do we go from Here?

IoT was developed to improve and simplify aspects of our day to day lives, yet faces issues associated with security. Blockchain was developed to enhance security associated with the transaction of information, but at first, failed to find alternative uses. When paired together, these new technologies compensate for what they would lack when apart. Blockchain and IoT are still relatively new and are their uses still being explored, once their potentials are fully revealed these technologies will not only have the ability to enhance industries but possibly even humanity as a whole.

The Power of Blockchain Paired with the Internet of Things. (2020, Mar 21). Retrieved from https://papersowl.com/examples/the-power-of-blockchain-paired-with-the-internet-of-things/