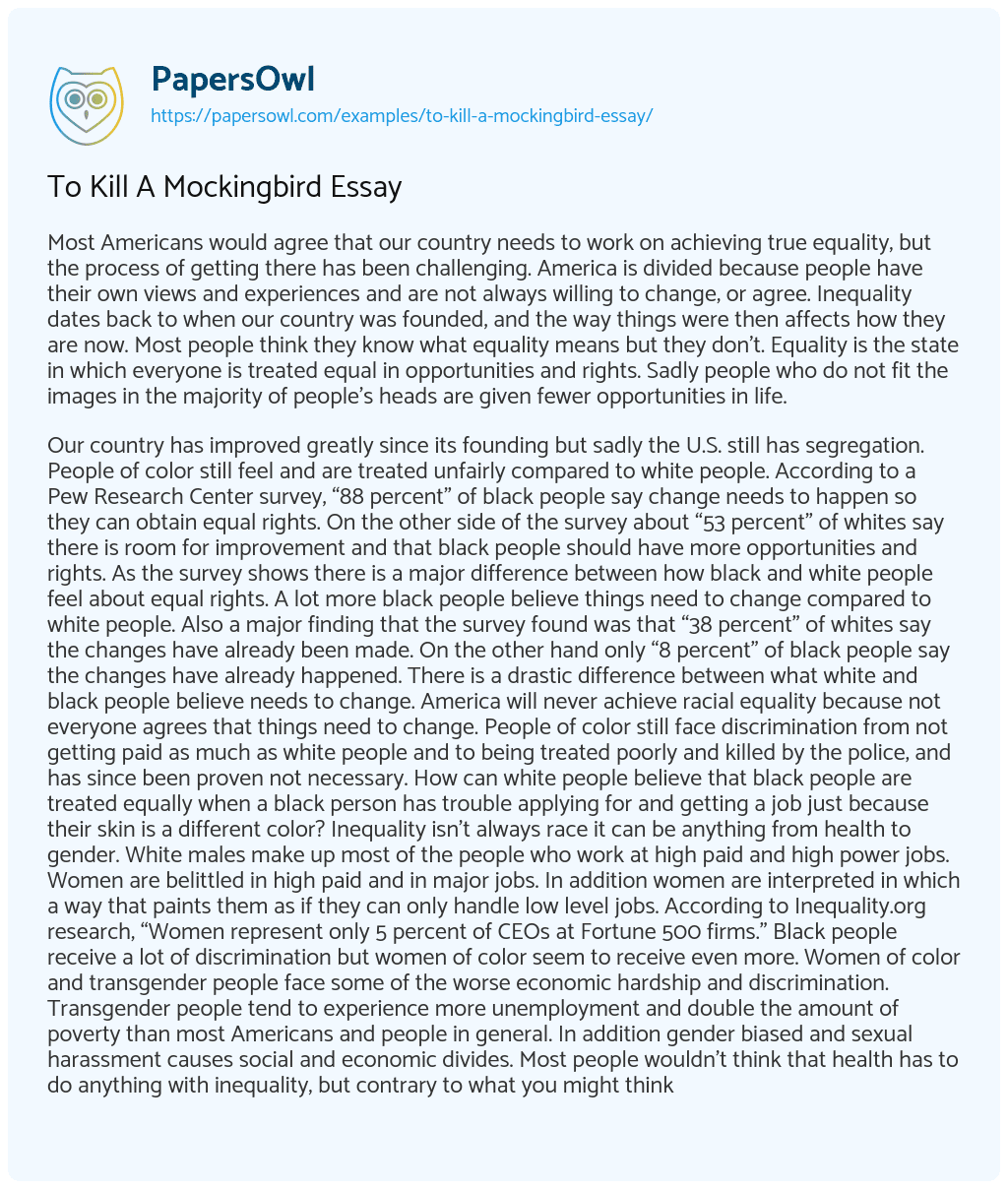 Most Americans would agree that our country needs to work on achieving true equality, but the process of getting there has been challenging. America is divided because people have their own views and experiences and are not always willing to change, or agree. Inequality dates back to when our country was founded, and the way things were then affects how they are now. Most people think they know what equality means but they don’t. Equality is the state in which everyone is treated equal in opportunities and rights. Sadly people who do not fit the images in the majority of people’s heads are given fewer opportunities in life.

Our country has improved greatly since its founding but sadly the U.S. still has segregation. People of color still feel and are treated unfairly compared to white people. According to a Pew Research Center survey, “88 percent” of black people say change needs to happen so they can obtain equal rights. On the other side of the survey about “53 percent” of whites say there is room for improvement and that black people should have more opportunities and rights. As the survey shows there is a major difference between how black and white people feel about equal rights. A lot more black people believe things need to change compared to white people. Also a major finding that the survey found was that “38 percent” of whites say the changes have already been made. On the other hand only “8 percent” of black people say the changes have already happened. There is a drastic difference between what white and black people believe needs to change. America will never achieve racial equality because not everyone agrees that things need to change. People of color still face discrimination from not getting paid as much as white people and to being treated poorly and killed by the police, and has since been proven not necessary. How can white people believe that black people are treated equally when a black person has trouble applying for and getting a job just because their skin is a different color? Inequality isn’t always race it can be anything from health to gender. White males make up most of the people who work at high paid and high power jobs. Women are belittled in high paid and in major jobs. In addition women are interpreted in which a way that paints them as if they can only handle low level jobs. According to Inequality.org research, “Women represent only 5 percent of CEOs at Fortune 500 firms.” Black people receive a lot of discrimination but women of color seem to receive even more. Women of color and transgender people face some of the worse economic hardship and discrimination. Transgender people tend to experience more unemployment and double the amount of poverty than most Americans and people in general. In addition gender biased and sexual harassment causes social and economic divides. Most people wouldn’t think that health has to do anything with inequality, but contrary to what you might think health and inequality have a lot to do with each other. Income levels can cause stress, and stress can lead to health issues. Economic inequality has a direct affect on people’s health. People who work long hours and don’t get paid very much may experience health issues. According to Inequality.org, “U.S. households with annual incomes below $50,000 report higher levels of stress than other families.” Stress can cause many health issues like diabetes, depression, and obesity. Some of these issues can be life threatening and could make it so that person cannot work. People may experience health inequality because they cannot afford medical care. Most of the inequality starts from money and history. People might not be able to get jobs because of their race or gender. Since people can’t even get a job because of there gender or ethnicity then we are a far way from equality.

Equality has improved greatly since our country’s founding, but there is still is inequality. Slavery is no longer existent and women can vote now. However people of color still face discrimination and there are pay gaps between women and men. In To Kill A Mockingbird by Lee, Harper, Scout was told to act and dress like a girl, and she wasn’t doing anything wrong she was just being a kid. This still happens today girls are supposed to “act and dress like a girl” and are discouraged from playing with toys meant for the opposite gender or wearing boys clothing. Also in To Kill A Mockingbird, Tom Robinson is automatically seen as being guilty just because he’s black. Today people of color still can be seen as guilty just because they are from a bad area or happen to be black. Even though there is still discrimination people are trying to make a change like Atticus Finch. In To kill A Mockingbird, Atticus said “ You never really understand a person until you consider things from his point of view—” “Sir?” “—until you climb into his skin and walk around in it (Lee 39).” Even in a time of segregation and discrimination Atticus knew it wasn’t right and taught Jem and Scout the importance of doing the right thing even when it isn’t the easy thing.

It’s clear that America will never achieve true equality, because time and time again we’ve tried and were not successful. There is more equality now but people still have their own opinions and views. Some people still discriminate towards people of different races and genders. People still experience inequality when trying to find a job or medical care. In the past there were similar issues that we face now. Today we face many new challenges but sadly we face ones from the past that won’t ever change.

To Kill A Mockingbird Essay. (2021, Jun 03). Retrieved from https://papersowl.com/examples/to-kill-a-mockingbird-essay/

Depiction of Discrimination in to Kill a Mockingbird

Scout Finch in “To Kill a Mockingbird”

To Kill a Mockingbird Racism