To his Coy Mistress and Dover Beach Poems Analysis 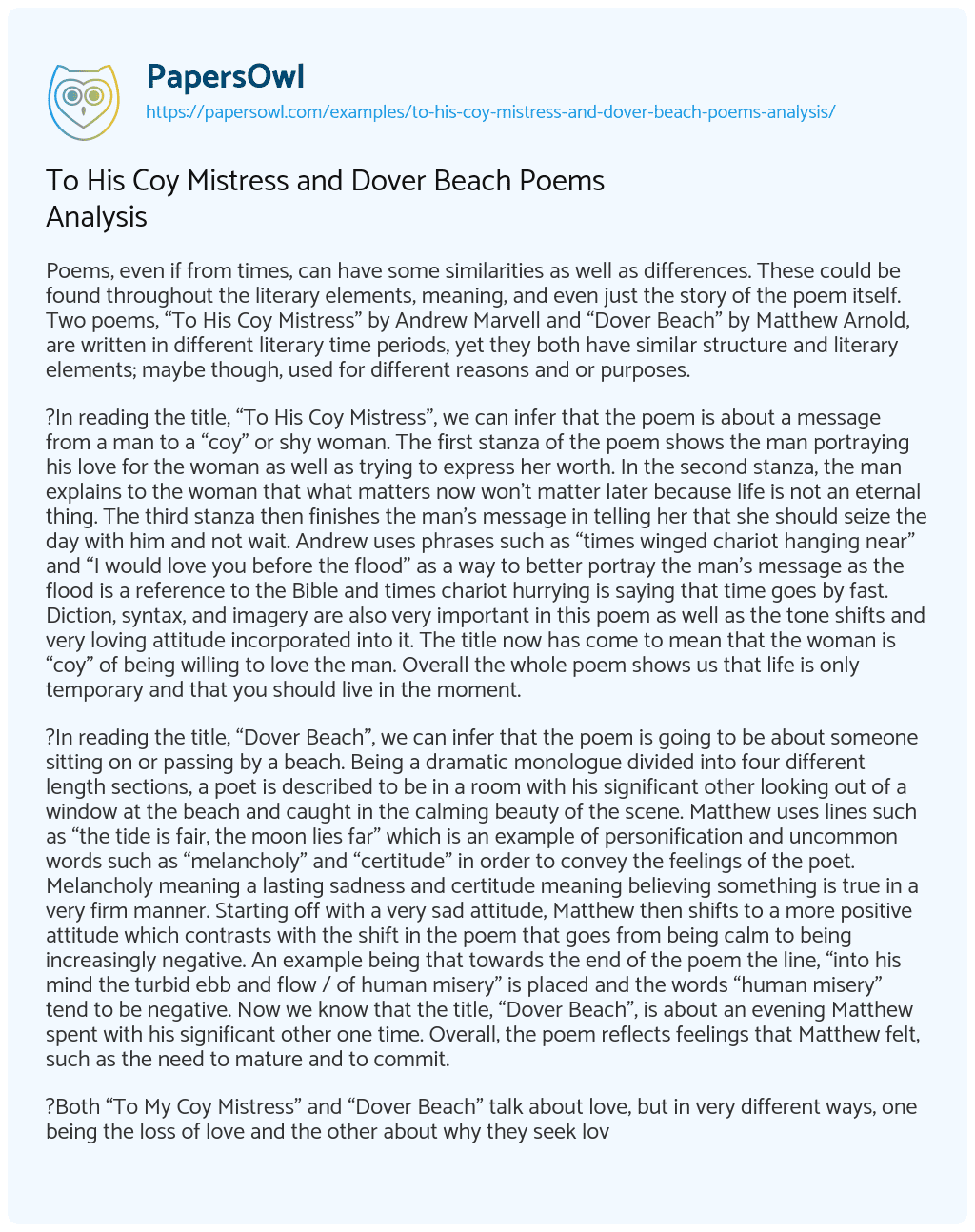 Poems, even if from times, can have some similarities as well as differences. These could be found throughout the literary elements, meaning, and even just the story of the poem itself. Two poems, “To His Coy Mistress” by Andrew Marvell and “Dover Beach” by Matthew Arnold, are written in different literary time periods, yet they both have similar structure and literary elements; maybe though, used for different reasons and or purposes.

?In reading the title, “To His Coy Mistress”, we can infer that the poem is about a message from a man to a “coy” or shy woman. The first stanza of the poem shows the man portraying his love for the woman as well as trying to express her worth. In the second stanza, the man explains to the woman that what matters now won’t matter later because life is not an eternal thing. The third stanza then finishes the man’s message in telling her that she should seize the day with him and not wait. Andrew uses phrases such as “times winged chariot hanging near” and “I would love you before the flood” as a way to better portray the man’s message as the flood is a reference to the Bible and times chariot hurrying is saying that time goes by fast. Diction, syntax, and imagery are also very important in this poem as well as the tone shifts and very loving attitude incorporated into it. The title now has come to mean that the woman is “coy” of being willing to love the man. Overall the whole poem shows us that life is only temporary and that you should live in the moment.

?In reading the title, “Dover Beach”, we can infer that the poem is going to be about someone sitting on or passing by a beach. Being a dramatic monologue divided into four different length sections, a poet is described to be in a room with his significant other looking out of a window at the beach and caught in the calming beauty of the scene. Matthew uses lines such as “the tide is fair, the moon lies far” which is an example of personification and uncommon words such as “melancholy” and “certitude” in order to convey the feelings of the poet. Melancholy meaning a lasting sadness and certitude meaning believing something is true in a very firm manner. Starting off with a very sad attitude, Matthew then shifts to a more positive attitude which contrasts with the shift in the poem that goes from being calm to being increasingly negative. An example being that towards the end of the poem the line, “into his mind the turbid ebb and flow / of human misery” is placed and the words “human misery” tend to be negative. Now we know that the title, “Dover Beach”, is about an evening Matthew spent with his significant other one time. Overall, the poem reflects feelings that Matthew felt, such as the need to mature and to commit.

?Both “Dover Beach” and “To His Coy Mistress” were written during different periods in time, yet they seemed similar in points of what they were about rather than how they were structured or written. Though there were more differences, each poem had an element of love and experienced a shift in the tone. I believe that the poems, contrast each other, but also reflect each other and the time period from which they were written.

To His Coy Mistress and Dover Beach Poems Analysis. (2021, Mar 24). Retrieved from https://papersowl.com/examples/to-his-coy-mistress-and-dover-beach-poems-analysis/

Poems “The Negro Speaks of Rivers” and “Still i Rise”

Claude Mckay and his Poems