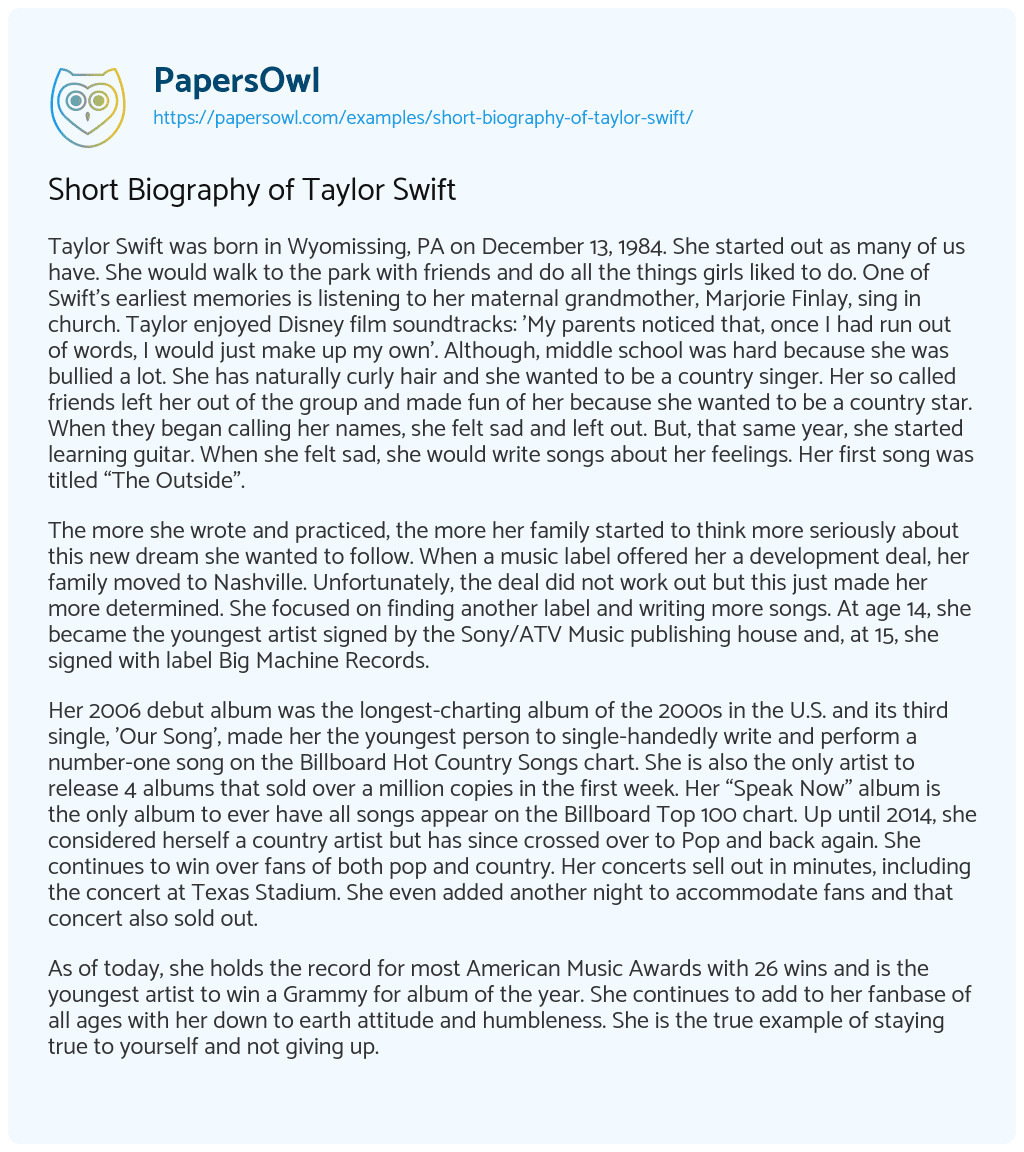 Taylor Swift was born in Wyomissing, PA on December 13, 1984. She started out as many of us have. She would walk to the park with friends and do all the things girls liked to do. One of Swift’s earliest memories is listening to her maternal grandmother, Marjorie Finlay, sing in church. Taylor enjoyed Disney film soundtracks: ‘My parents noticed that, once I had run out of words, I would just make up my own’. Although, middle school was hard because she was bullied a lot. She has naturally curly hair and she wanted to be a country singer. Her so called friends left her out of the group and made fun of her because she wanted to be a country star. When they began calling her names, she felt sad and left out. But, that same year, she started learning guitar. When she felt sad, she would write songs about her feelings. Her first song was titled “The Outside”.

The more she wrote and practiced, the more her family started to think more seriously about this new dream she wanted to follow. When a music label offered her a development deal, her family moved to Nashville. Unfortunately, the deal did not work out but this just made her more determined. She focused on finding another label and writing more songs. At age 14, she became the youngest artist signed by the Sony/ATV Music publishing house and, at 15, she signed with label Big Machine Records.

Her 2006 debut album was the longest-charting album of the 2000s in the U.S. and its third single, ‘Our Song’, made her the youngest person to single-handedly write and perform a number-one song on the Billboard Hot Country Songs chart. She is also the only artist to release 4 albums that sold over a million copies in the first week. Her “Speak Now” album is the only album to ever have all songs appear on the Billboard Top 100 chart. Up until 2014, she considered herself a country artist but has since crossed over to Pop and back again. She continues to win over fans of both pop and country. Her concerts sell out in minutes, including the concert at Texas Stadium. She even added another night to accommodate fans and that concert also sold out.

As of today, she holds the record for most American Music Awards with 26 wins and is the youngest artist to win a Grammy for album of the year. She continues to add to her fanbase of all ages with her down to earth attitude and humbleness. She is the true example of staying true to yourself and not giving up.