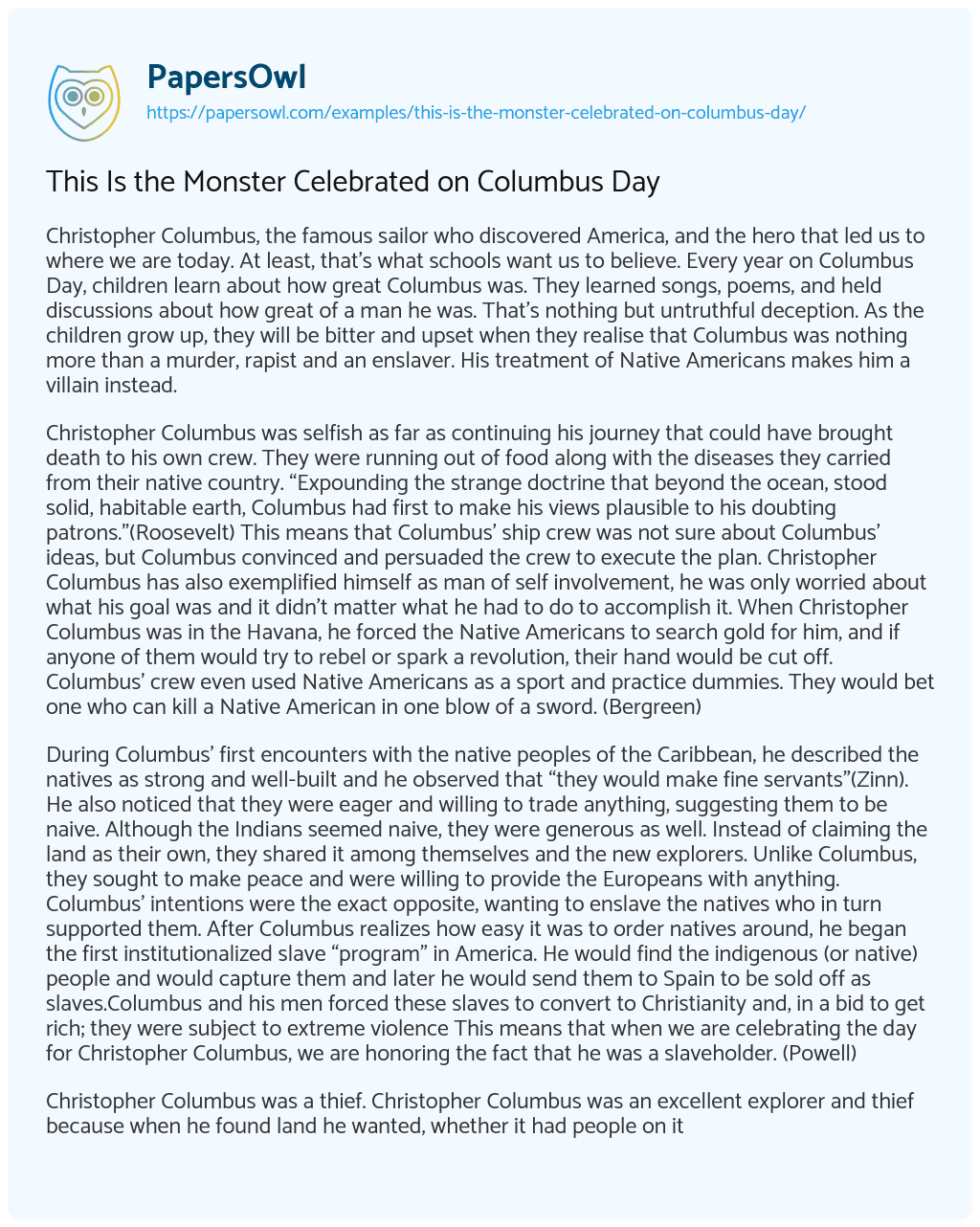 Christopher Columbus, the famous sailor who discovered America, and the hero that led us to where we are today. At least, that’s what schools want us to believe. Every year on Columbus Day, children learn about how great Columbus was. They learned songs, poems, and held discussions about how great of a man he was. That’s nothing but untruthful deception. As the children grow up, they will be bitter and upset when they realise that Columbus was nothing more than a murder, rapist and an enslaver. His treatment of Native Americans makes him a villain instead.

Christopher Columbus was selfish as far as continuing his journey that could have brought death to his own crew. They were running out of food along with the diseases they carried from their native country. “Expounding the strange doctrine that beyond the ocean, stood solid, habitable earth, Columbus had first to make his views plausible to his doubting patrons.”(Roosevelt) This means that Columbus’ ship crew was not sure about Columbus’ ideas, but Columbus convinced and persuaded the crew to execute the plan. Christopher Columbus has also exemplified himself as man of self involvement, he was only worried about what his goal was and it didn’t matter what he had to do to accomplish it. When Christopher Columbus was in the Havana, he forced the Native Americans to search gold for him, and if anyone of them would try to rebel or spark a revolution, their hand would be cut off. Columbus’ crew even used Native Americans as a sport and practice dummies. They would bet one who can kill a Native American in one blow of a sword. (Bergreen)

During Columbus’ first encounters with the native peoples of the Caribbean, he described the natives as strong and well-built and he observed that “they would make fine servants”(Zinn). He also noticed that they were eager and willing to trade anything, suggesting them to be naive. Although the Indians seemed naive, they were generous as well. Instead of claiming the land as their own, they shared it among themselves and the new explorers. Unlike Columbus, they sought to make peace and were willing to provide the Europeans with anything. Columbus’ intentions were the exact opposite, wanting to enslave the natives who in turn supported them. After Columbus realizes how easy it was to order natives around, he began the first institutionalized slave “program” in America. He would find the indigenous (or native) people and would capture them and later he would send them to Spain to be sold off as slaves.Columbus and his men forced these slaves to convert to Christianity and, in a bid to get rich; they were subject to extreme violence This means that when we are celebrating the day for Christopher Columbus, we are honoring the fact that he was a slaveholder. (Powell)

Christopher Columbus was a thief. Christopher Columbus was an excellent explorer and thief because when he found land he wanted, whether it had people on it or not, he would steal it. While on the island of Hispaniola, Columbus claimed Hispaniola even though it was already claimed by those who were living on that island. When the islanders try to rebel against him, he uses violence on them, and scared them into submission. Columbus kidnapped and enslaved more than a thousand people on Hispaniola. He orders every Indian over 14 to give a large quantity of gold to Spanish. Those region without gold gave cotton instead. (Bergreen)

Columbus was a rapist. Columbus was involved personally in violence against the natives He encouraged his people to rape the native women and do not forget the young ones, aged between 8 and 10 years. Cutting off ears and noses was a punishment for minor offenses committed by the indigenous persons. Furthermore, Columbus used people as dog food and hunted the natives as his way of sports. He sold underage girls into sexual slavery. Bergreen quotes Michele de Cuneo,“While I was in the boat, I captured a very beautiful woman, whom the Lord Admiral [Columbus] gave to me.” (Bergreen) Columbus took women captive and gave it to his men to rape. It’s basically the same thing as if he is doing it. (Columbus)

This Is the Monster Celebrated on Columbus Day. (2020, Jan 31). Retrieved from https://papersowl.com/examples/this-is-the-monster-celebrated-on-columbus-day/