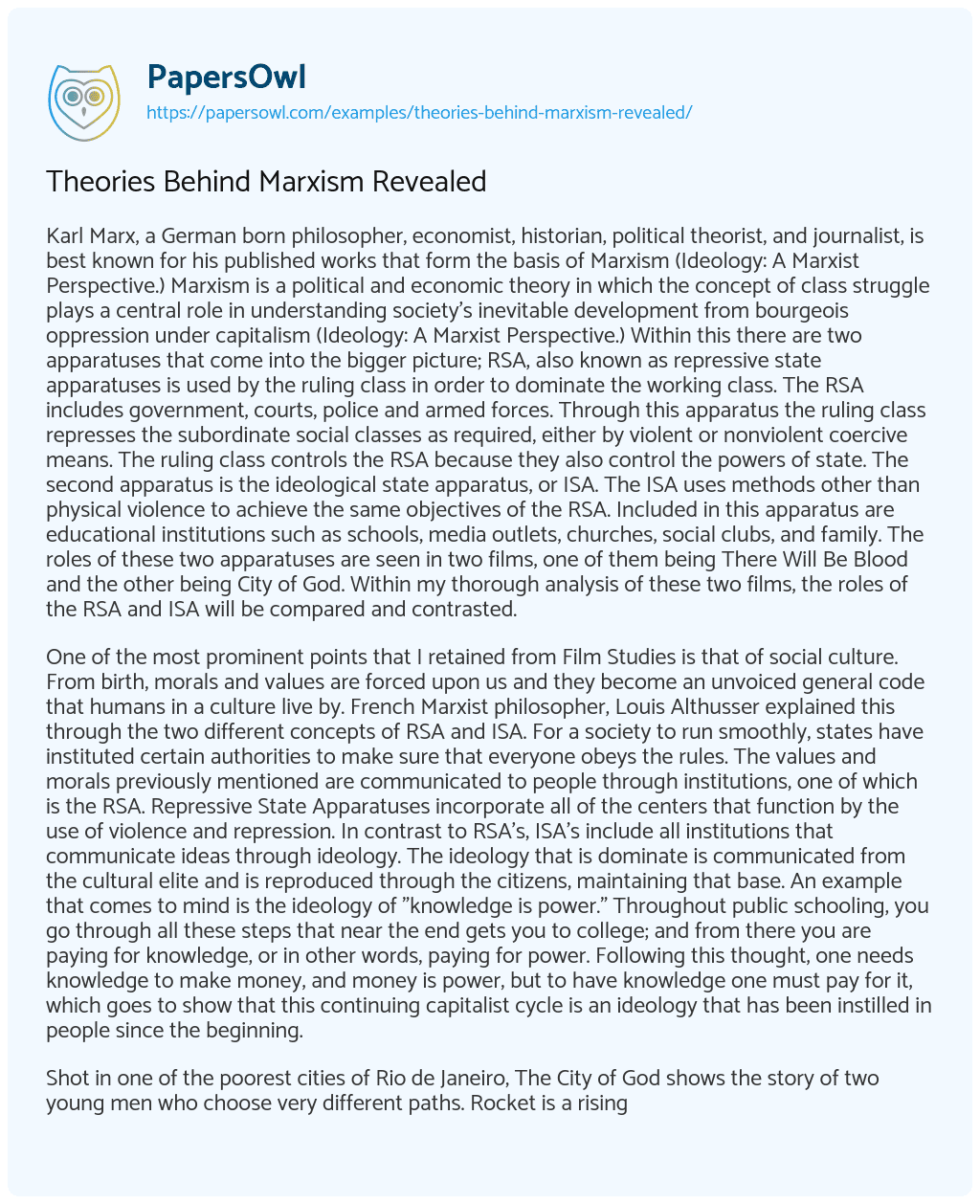 Karl Marx, a German born philosopher, economist, historian, political theorist, and journalist, is best known for his published works that form the basis of Marxism (Ideology: A Marxist Perspective.) Marxism is a political and economic theory in which the concept of class struggle plays a central role in understanding society’s inevitable development from bourgeois oppression under capitalism (Ideology: A Marxist Perspective.) Within this there are two apparatuses that come into the bigger picture; RSA, also known as repressive state apparatuses is used by the ruling class in order to dominate the working class. The RSA includes government, courts, police and armed forces. Through this apparatus the ruling class represses the subordinate social classes as required, either by violent or nonviolent coercive means. The ruling class controls the RSA because they also control the powers of state. The second apparatus is the ideological state apparatus, or ISA. The ISA uses methods other than physical violence to achieve the same objectives of the RSA. Included in this apparatus are educational institutions such as schools, media outlets, churches, social clubs, and family. The roles of these two apparatuses are seen in two films, one of them being There Will Be Blood and the other being City of God. Within my thorough analysis of these two films, the roles of the RSA and ISA will be compared and contrasted.

One of the most prominent points that I retained from Film Studies is that of social culture. From birth, morals and values are forced upon us and they become an unvoiced general code that humans in a culture live by. French Marxist philosopher, Louis Althusser explained this through the two different concepts of RSA and ISA. For a society to run smoothly, states have instituted certain authorities to make sure that everyone obeys the rules. The values and morals previously mentioned are communicated to people through institutions, one of which is the RSA. Repressive State Apparatuses incorporate all of the centers that function by the use of violence and repression. In contrast to RSA’s, ISA’s include all institutions that communicate ideas through ideology. The ideology that is dominate is communicated from the cultural elite and is reproduced through the citizens, maintaining that base. An example that comes to mind is the ideology of “knowledge is power.” Throughout public schooling, you go through all these steps that near the end gets you to college; and from there you are paying for knowledge, or in other words, paying for power. Following this thought, one needs knowledge to make money, and money is power, but to have knowledge one must pay for it, which goes to show that this continuing capitalist cycle is an ideology that has been instilled in people since the beginning.

Shot in one of the poorest cities of Rio de Janeiro, The City of God shows the story of two young men who choose very different paths. Rocket is a rising photographer who documents the expanding drug related violence of his neighborhood. Lil Ze is an ambitious drug dealer who uses Rocket and his photos as a way to increase his fame. Throughout this film we see many examples of the ISA playing a huge role. The first example is seen within the role of media. In the film, Rocket was very hesitant to publish photos that he had taken but not so much to the ones he had of Lil Ze. Rocket worked for the newspaper and ended up publishing the photos of Lil Ze thinking that he was going to “kill him” for it as he knew he shouldn’t have done that since it was dangerous to call out the state apparatus. The ideological state apparatus plays a role in this as it allows Rocket to express class struggles politically and in so doing also counters the dominant class.

Family and friendships are a second aspect of the ideological state apparatus that we see get tested throughout the entire film, City of God. Throughout this entire film we see the younger siblings watching the older siblings get involved in multiple acts of violence. An example in the film is when we see Goose getting yelled at by his father demanding that he’s going to sell fish with him (Meirelles.) His father gave him that ultimatum that he can sell fish and get pennies or rob a hotel and make tons. This doesn’t in any way justify the actions, but we can see the temptation of actions. An ideology seen here is that one ought to do whatever makes them the most money and success, and so we see Goose choose this over family.

Lastly, in the City of God, another scene we see that shows family and friendships through an ideological state apparatus is in a scene with Rocket. Rocket is seen throughout the film just trying to get by in life and let go out of the bad parts. He tries to find a life for himself by getting a job and moving on. Rocket is not against everything going on, he is just stuck in the wrong place at the wrong time. Always stuck in the middle, he soon realizes that he’ll always be stuck there. We see this in many different parts of the film; in the beginning he gets stuck with his family, and later on when he tries to make something out of his own life he gets held back. Rocket is a character who is stuck between what is supposed to be the good and the bad but neither one is particularly good.

There Will Be Blood is another film that portrays the ideological state apparatus through different scenes. The film shows us a world in which the relationship that exists between capitalism and Christianity is different than what exists currently. The existence in which American churches synchronize with business was not always true. The film accurately reveals the strong resistance to basic Christian principles of fellowship, charity, and reasonable distributions of wealth that made capitalists like Plainview not a hero of the Sunday preaching’s, but a villain to preach against.

The American dream is an ideology that has existed since we can remember. The idea of graduating from an ivy league school, being in the business of investments, and owning a house with a white picket fence is nothing but staged for looks. Daniel Plainview shows through the ideological state apparatus that you don’t have to start off at some fancy school to make it big; he shows that he is capable of doing every bit of grunt work and puts in the hours to make himself a rich man. The ideology is shattered towards the end when we see that even though Daniel achieved these ends at the expense of others and himself, he ends up becoming a broken, hateful, and bitter man without any meaningful connection to others or a sense of happiness.

Another example in the film There Will Be Blood, is seen in the part of the movie where Daniel kills Eli. Both of these men serve as a point of conflict of opinion and ideology. Eli is a preacher who rants about the power of religion to uplift men and women, while Daniel is an shameless capitalist, a money-minded businessman who only wants to take more and earn more money. The repressive state ideology comes to play in this violent scene. “I am finished” states Daniel after he murders Eli (Anderson,) the power of ideology is immense and shows that the reason for violence was completely unnecessary. The idea that money is everything, is shown to be completely contradicted in this part of the film. Daniel seems to have everything after striking it rich but the through the repressive state apparatus we can see that it isn’t true as he still has hatred towards Eli and strikes to get revenge.

Through the comparison and contrast analysis of these two films, There Will Be Blood and City of God we can see the connection between the ideological state apparatus and the repressive state apparatus. These two apparatuses of state perform the double function of violence and ideology. A state apparatus cannot be completely repressive or completely ideological. The distinction between RSA and ISA is its primary function in society; which is when individual persons and political groups threaten the social order of a society established by a dominate class, the state invokes order to be shown (Ideology: A Marxist Perspective.) While both apparatuses are implemented for the same intended ends, their methods and structure happen to be quite different. By implementing these ideologies, we are helping keep social structure where it is supposed to be. The two films do a great job in conveying the positive and negatives of both sides of apparatuses. As told by Marx, ideology is what allows a society to persist, even though the essence of that society may contain contradictions (Ideology: A Marxist Perspective.) My analysis of these two particular films shows that the essence of society must be directly changed, before the contradictions can be removed.

Marxism is the Arrangement of Communism