Themes of Fortune in the Tempest 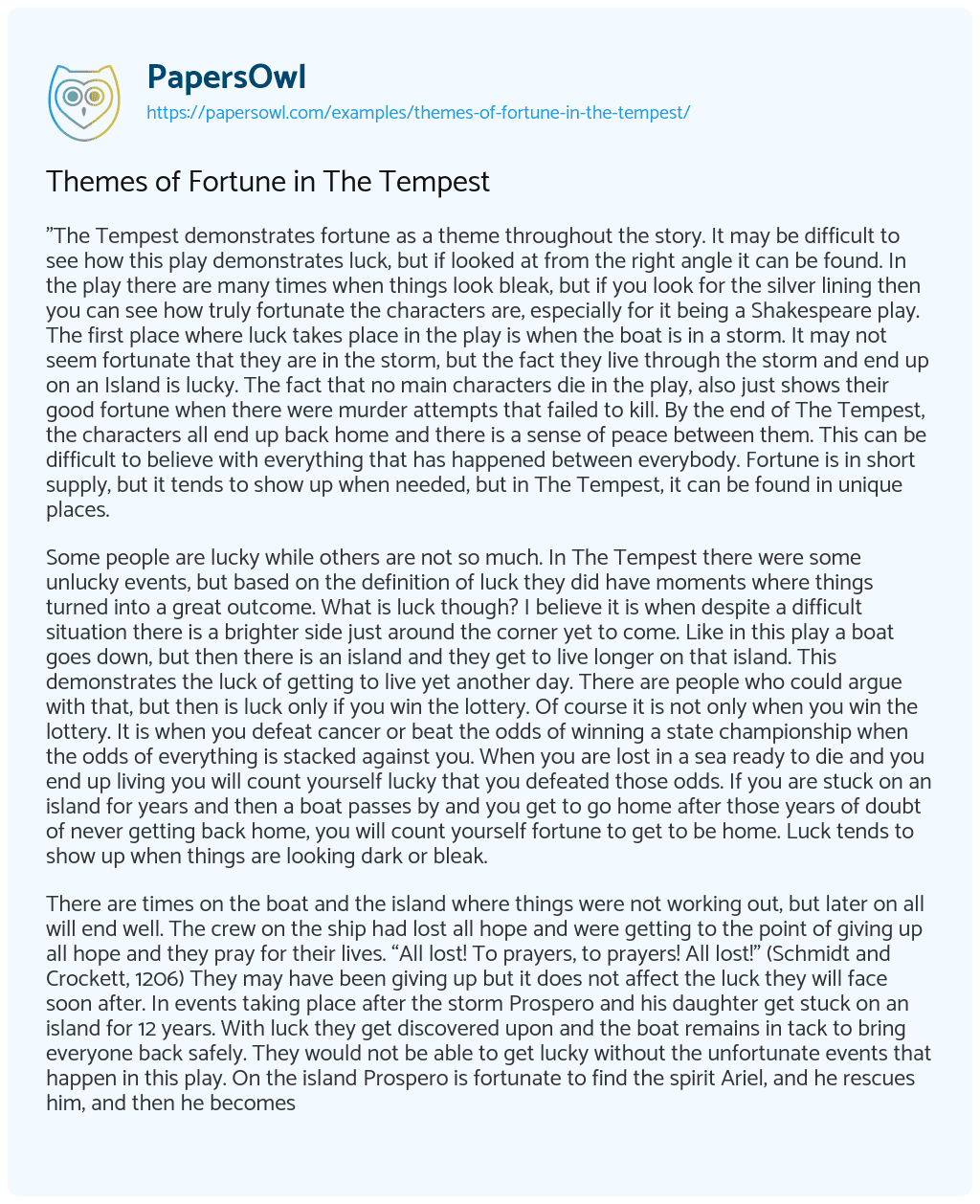 “The Tempest demonstrates fortune as a theme throughout the story. It may be difficult to see how this play demonstrates luck, but if looked at from the right angle it can be found. In the play there are many times when things look bleak, but if you look for the silver lining then you can see how truly fortunate the characters are, especially for it being a Shakespeare play. The first place where luck takes place in the play is when the boat is in a storm. It may not seem fortunate that they are in the storm, but the fact they live through the storm and end up on an Island is lucky. The fact that no main characters die in the play, also just shows their good fortune when there were murder attempts that failed to kill. By the end of The Tempest, the characters all end up back home and there is a sense of peace between them. This can be difficult to believe with everything that has happened between everybody. Fortune is in short supply, but it tends to show up when needed, but in The Tempest, it can be found in unique places.

Some people are lucky while others are not so much. In The Tempest there were some unlucky events, but based on the definition of luck they did have moments where things turned into a great outcome. What is luck though? I believe it is when despite a difficult situation there is a brighter side just around the corner yet to come. Like in this play a boat goes down, but then there is an island and they get to live longer on that island. This demonstrates the luck of getting to live yet another day. There are people who could argue with that, but then is luck only if you win the lottery. Of course it is not only when you win the lottery. It is when you defeat cancer or beat the odds of winning a state championship when the odds of everything is stacked against you. When you are lost in a sea ready to die and you end up living you will count yourself lucky that you defeated those odds. If you are stuck on an island for years and then a boat passes by and you get to go home after those years of doubt of never getting back home, you will count yourself fortune to get to be home. Luck tends to show up when things are looking dark or bleak.

There are times on the boat and the island where things were not working out, but later on all will end well. The crew on the ship had lost all hope and were getting to the point of giving up all hope and they pray for their lives. “All lost! To prayers, to prayers! All lost!” (Schmidt and Crockett, 1206) They may have been giving up but it does not affect the luck they will face soon after. In events taking place after the storm Prospero and his daughter get stuck on an island for 12 years. With luck they get discovered upon and the boat remains in tack to bring everyone back safely. They would not be able to get lucky without the unfortunate events that happen in this play. On the island Prospero is fortunate to find the spirit Ariel, and he rescues him, and then he becomes Prospero’s worker. “All hail, great master, grave sir, hail! I come To answer thy best pleasure; be’t to fly, To swim, to dive into fire, to ride On the curl’d clouds.” (Schmidt and Crockett, 1212) This is Ariel calling Prospero his master in which shows Prospero’s luck to meet this spirit who will end up helping him. The event of the boat and what happens on the island are not the best situations, but it could always be worse.

Even with the tragedies that happen there is a positive outcome in the end of the play that usually only happens in children’s stories. In children stories there is always a happy ending and a lesson to be learned. The Tempest shows us this by everyone being alive and the lesson of forgiveness. Prospero forgives his brother Antonio for what he’s done. Prospero’s daughter who was stuck on the island with him ends up with the luck of getting married to someone she loves. “Go quick away: the story of my life And the particular accidents gone by Since I came to this isle. And in the morn ’ll bring you to your ship and so to Naples, Where I have hope to see the nuptial Of these our dear-belovèd solemnized, And thence retire me to my Milan, where Every third thought shall be my grave.” (Schmidt and Crockett, 1263) He gets the luck of getting to see his daughter get married after being stuck on the island with her. Most parents count themselves fortune to see their children walk down the aisle on their wedding day.

In The Tempest the characters face challenges, but their unfortune at some point turns to luck. Prospero ends up getting to go home and Ariel gets set free. After being strayed on an island for 12 years, Miranda gets to marry the man she loves. Antonio gets his brothers mercy after attempting to get rid of him. All these events that happen are because of luck. Thanks to these peoples fortunes they all get to go on living in the end and we the readers are left with the morals of this play. Not every play gets a happy ending, but with some luck we get to read at least one book with a happy ending in adulthood.”

Themes of Fortune in The Tempest. (2021, Apr 14). Retrieved from https://papersowl.com/examples/themes-of-fortune-in-the-tempest/