the Right to Fail 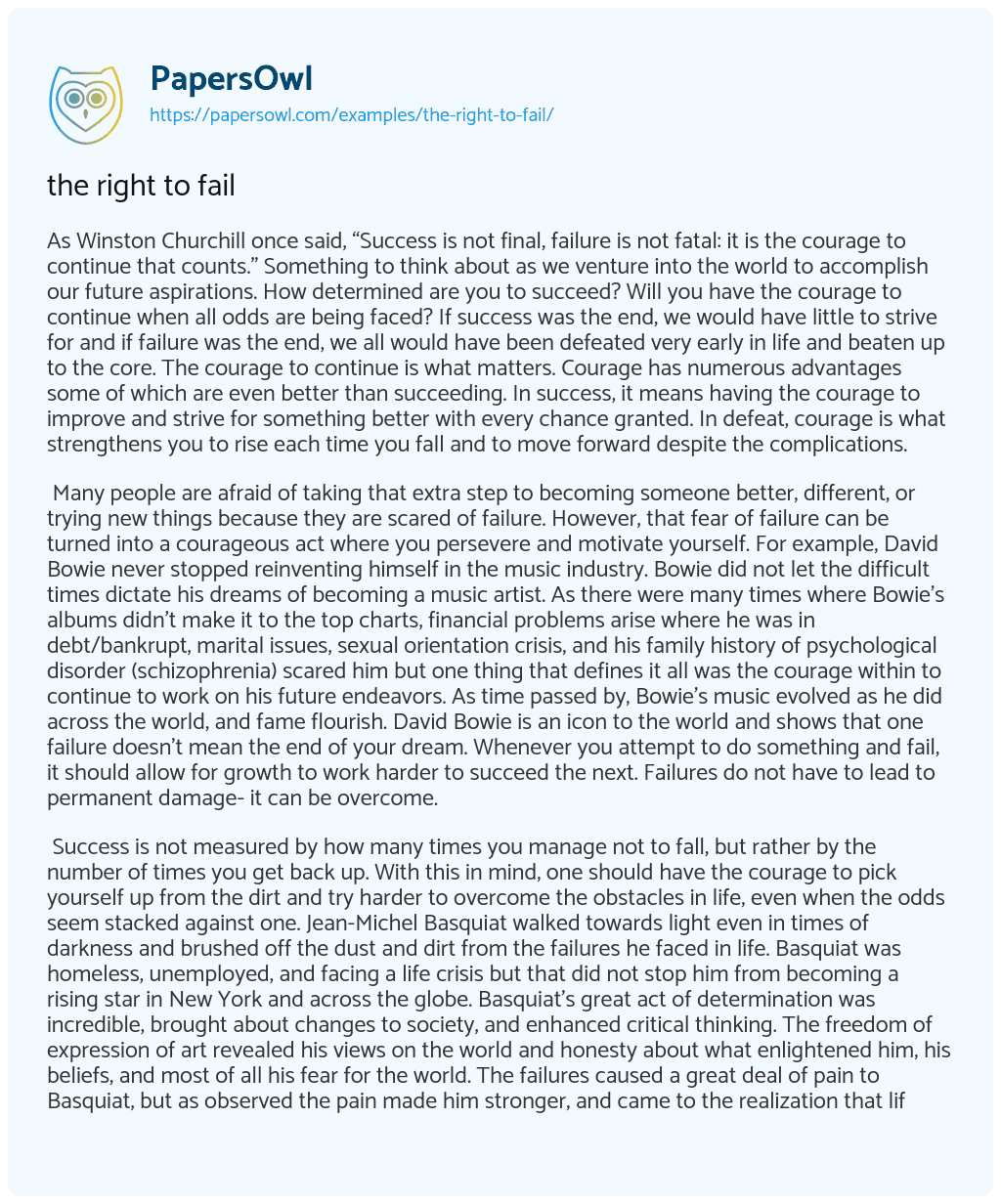 As Winston Churchill once said, “Success is not final, failure is not fatal: it is the courage to continue that counts.” Something to think about as we venture into the world to accomplish our future aspirations. How determined are you to succeed? Will you have the courage to continue when all odds are being faced? If success was the end, we would have little to strive for and if failure was the end, we all would have been defeated very early in life and beaten up to the core. The courage to continue is what matters. Courage has numerous advantages some of which are even better than succeeding. In success, it means having the courage to improve and strive for something better with every chance granted. In defeat, courage is what strengthens you to rise each time you fall and to move forward despite the complications.

Many people are afraid of taking that extra step to becoming someone better, different, or trying new things because they are scared of failure. However, that fear of failure can be turned into a courageous act where you persevere and motivate yourself. For example, David Bowie never stopped reinventing himself in the music industry. Bowie did not let the difficult times dictate his dreams of becoming a music artist. As there were many times where Bowie’s albums didn’t make it to the top charts, financial problems arise where he was in debt/bankrupt, marital issues, sexual orientation crisis, and his family history of psychological disorder (schizophrenia) scared him but one thing that defines it all was the courage within to continue to work on his future endeavors. As time passed by, Bowie’s music evolved as he did across the world, and fame flourish. David Bowie is an icon to the world and shows that one failure doesn’t mean the end of your dream. Whenever you attempt to do something and fail, it should allow for growth to work harder to succeed the next. Failures do not have to lead to permanent damage- it can be overcome.

Success is not measured by how many times you manage not to fall, but rather by the number of times you get back up. With this in mind, one should have the courage to pick yourself up from the dirt and try harder to overcome the obstacles in life, even when the odds seem stacked against one. Jean-Michel Basquiat walked towards light even in times of darkness and brushed off the dust and dirt from the failures he faced in life. Basquiat was homeless, unemployed, and facing a life crisis but that did not stop him from becoming a rising star in New York and across the globe. Basquiat’s great act of determination was incredible, brought about changes to society, and enhanced critical thinking. The freedom of expression of art revealed his views on the world and honesty about what enlightened him, his beliefs, and most of all his fear for the world. The failures caused a great deal of pain to Basquiat, but as observed the pain made him stronger, and came to the realization that life is once, and it is worth living to the greatest.

“Success is not final, failure is not fatal: it is the courage to continue that counts,” said Winston Churchill. Even though failure is a basic part of life, it is one of our greatest fears and the road to success is endless. Always succeeding doesn’t mean anything is there was nothing taken from it. Everyone fails, it isn’t fatal if you do. The important thing is not to give up once you have failed, but to keep working on what you failed so you can succeed the next time.

Advices how to Reach Success

Failures and Success in Business

From Dreams to Reality

My View of the Definition of Success