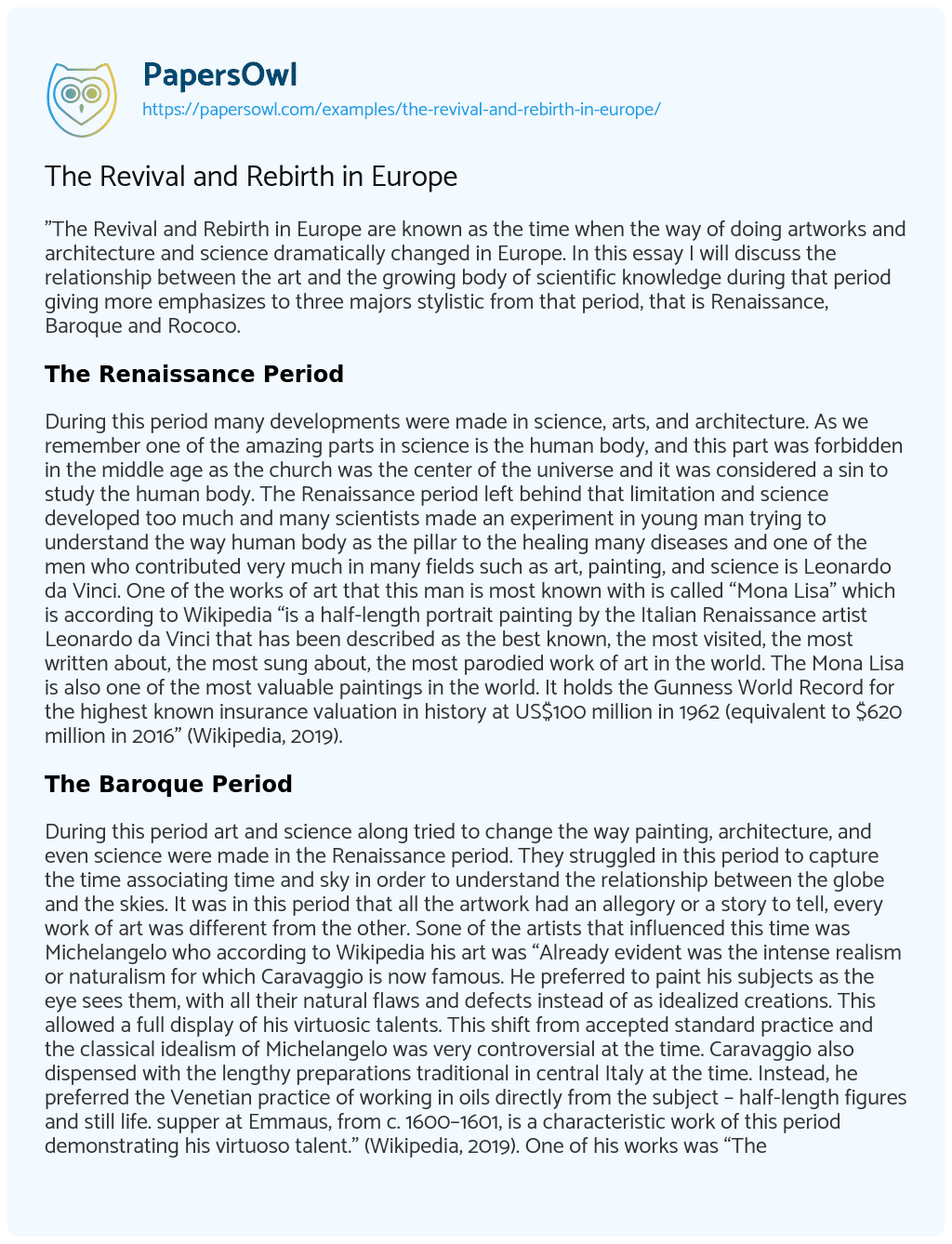 “The Revival and Rebirth in Europe are known as the time when the way of doing artworks and architecture and science dramatically changed in Europe. In this essay I will discuss the relationship between the art and the growing body of scientific knowledge during that period giving more emphasizes to three majors stylistic from that period, that is Renaissance, Baroque and Rococo.

During this period many developments were made in science, arts, and architecture. As we remember one of the amazing parts in science is the human body, and this part was forbidden in the middle age as the church was the center of the universe and it was considered a sin to study the human body. The Renaissance period left behind that limitation and science developed too much and many scientists made an experiment in young man trying to understand the way human body as the pillar to the healing many diseases and one of the men who contributed very much in many fields such as art, painting, and science is Leonardo da Vinci. One of the works of art that this man is most known with is called “Mona Lisa” which is according to Wikipedia “is a half-length portrait painting by the Italian Renaissance artist Leonardo da Vinci that has been described as the best known, the most visited, the most written about, the most sung about, the most parodied work of art in the world. The Mona Lisa is also one of the most valuable paintings in the world. It holds the Gunness World Record for the highest known insurance valuation in history at US$100 million in 1962 (equivalent to $620 million in 2016” (Wikipedia, 2019).

During this period art and science along tried to change the way painting, architecture, and even science were made in the Renaissance period. They struggled in this period to capture the time associating time and sky in order to understand the relationship between the globe and the skies. It was in this period that all the artwork had an allegory or a story to tell, every work of art was different from the other. Sone of the artists that influenced this time was Michelangelo who according to Wikipedia his art was “Already evident was the intense realism or naturalism for which Caravaggio is now famous. He preferred to paint his subjects as the eye sees them, with all their natural flaws and defects instead of as idealized creations. This allowed a full display of his virtuosic talents. This shift from accepted standard practice and the classical idealism of Michelangelo was very controversial at the time. Caravaggio also dispensed with the lengthy preparations traditional in central Italy at the time. Instead, he preferred the Venetian practice of working in oils directly from the subject – half-length figures and still life. supper at Emmaus, from c. 1600–1601, is a characteristic work of this period demonstrating his virtuoso talent.” (Wikipedia, 2019). One of his works was “The Calling of Saint Matthew” where he painted people who were singing in a church vividly.

The Rococo movement came after the Baroque one and it was definitely different from the last one in that the artists of this period moved away from the dramatic style of the late Baroque and became more playful in the artworks, painting happy moments, where you found an exuberance of people dancing around enjoying themselves. This style was invented by Jean Antoine Watteau and one of his lucid works is “The Embarkation of Cythera” which is a painting of people in a feast having a good time.

In conclusion, it is very interesting to see how the story of humanity was handled during this time. People like Da Vince will never be forgotten and many of the science during this period developed very much and nowadays we can not talk about artworks without mentioning this man and other who came after him.

The Revival and Rebirth in Europe. (2021, Apr 24). Retrieved from https://papersowl.com/examples/the-revival-and-rebirth-in-europe/

Caravaggio and Caravaggisti in Th-Century Europe

Renaissance: the Rebirth of Culture

The Flagellation of Christ by Caravaggio

The Catholic Reformation and the Baroque Style