Caravaggio and Caravaggisti in Th-Century Europe 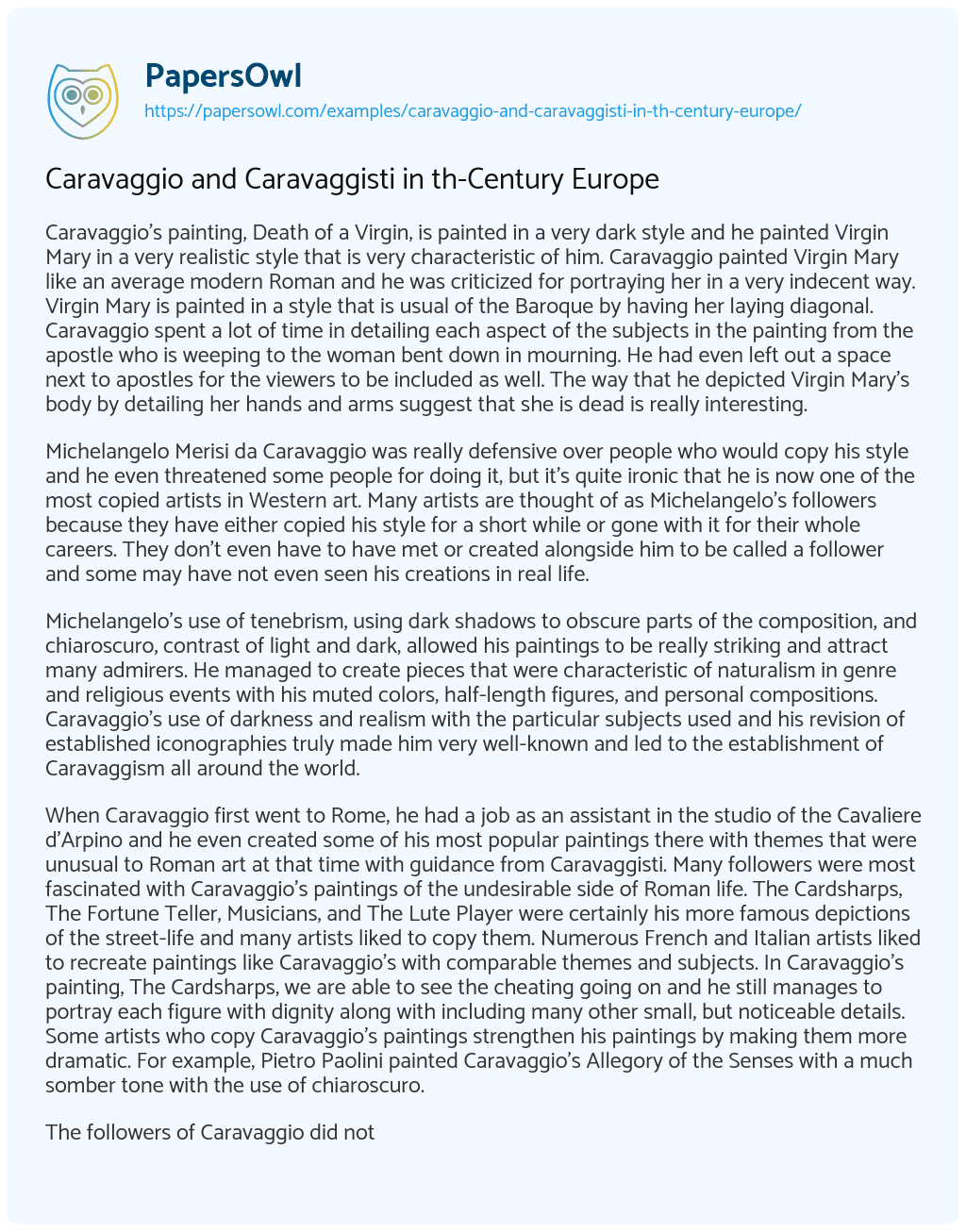 Caravaggio’s painting, Death of a Virgin, is painted in a very dark style and he painted Virgin Mary in a very realistic style that is very characteristic of him. Caravaggio painted Virgin Mary like an average modern Roman and he was criticized for portraying her in a very indecent way. Virgin Mary is painted in a style that is usual of the Baroque by having her laying diagonal. Caravaggio spent a lot of time in detailing each aspect of the subjects in the painting from the apostle who is weeping to the woman bent down in mourning. He had even left out a space next to apostles for the viewers to be included as well. The way that he depicted Virgin Mary’s body by detailing her hands and arms suggest that she is dead is really interesting.

Michelangelo Merisi da Caravaggio was really defensive over people who would copy his style and he even threatened some people for doing it, but it’s quite ironic that he is now one of the most copied artists in Western art. Many artists are thought of as Michelangelo’s followers because they have either copied his style for a short while or gone with it for their whole careers. They don’t even have to have met or created alongside him to be called a follower and some may have not even seen his creations in real life.

Michelangelo’s use of tenebrism, using dark shadows to obscure parts of the composition, and chiaroscuro, contrast of light and dark, allowed his paintings to be really striking and attract many admirers. He managed to create pieces that were characteristic of naturalism in genre and religious events with his muted colors, half-length figures, and personal compositions. Caravaggio’s use of darkness and realism with the particular subjects used and his revision of established iconographies truly made him very well-known and led to the establishment of Caravaggism all around the world.

When Caravaggio first went to Rome, he had a job as an assistant in the studio of the Cavaliere d’Arpino and he even created some of his most popular paintings there with themes that were unusual to Roman art at that time with guidance from Caravaggisti. Many followers were most fascinated with Caravaggio’s paintings of the undesirable side of Roman life. The Cardsharps, The Fortune Teller, Musicians, and The Lute Player were certainly his more famous depictions of the street-life and many artists liked to copy them. Numerous French and Italian artists liked to recreate paintings like Caravaggio’s with comparable themes and subjects. In Caravaggio’s painting, The Cardsharps, we are able to see the cheating going on and he still manages to portray each figure with dignity along with including many other small, but noticeable details. Some artists who copy Caravaggio’s paintings strengthen his paintings by making them more dramatic. For example, Pietro Paolini painted Caravaggio’s Allegory of the Senses with a much somber tone with the use of chiaroscuro.

The followers of Caravaggio did not have the opportunity to be taught by Caravaggio himself, so they took any characteristics of his methods and styles that they wanted. Some special painters like Cecco del Caravaggio, Orazio Gentileschi, and Artemisia Gentileschi knew Caravaggio personally and were able to communicate with him about their work. Orazio and Artemisia Gentileschi created many lyrical paintings, used several colors that Caravaggio didn’t incorporate, and were influenced by locals. Their work showed how they used Caravaggio’s tenebrism and incorporated his religious iconography. Orazio and Artemisia both like to emphasize different aspects of Caravaggio’s paintings that bring out many emotions that weren’t seen before.

Many other artists were impacted by Caravaggio’s works that illustrated devotional figures and humanized them. Northern artists like Ter Brugghen, Honthorst, and Mattias Stomer replicated Caravaggio’s paintings and they helped Doubting Thomas imagery become well-liked in Utrecht, a city in the Netherlands, during the beginning of the 17th century. The growth of the Caravaggesque style in Spain was credited attributed to Jusepe de Ribera who painted many half-length saints and large-scale devotional paintings. His paintings drew from Caravaggio’s tenebrism and helped in depicting devoted religious figures. Ribera had even requested for his tenant to allow him to cut a hole in the ceiling to allow sunlight in. Caravaggisti really go to very extreme lengths to reach the dramatic lighting, direct observation, and realism that Caravaggio brought to art.

Caravaggio and Caravaggisti in th-Century Europe. (2019, Mar 05). Retrieved from https://papersowl.com/examples/caravaggio-and-caravaggisti-in-th-century-europe/

The Flagellation of Christ by Caravaggio

Caravaggio is a Dude