The Problems with the Return Directive 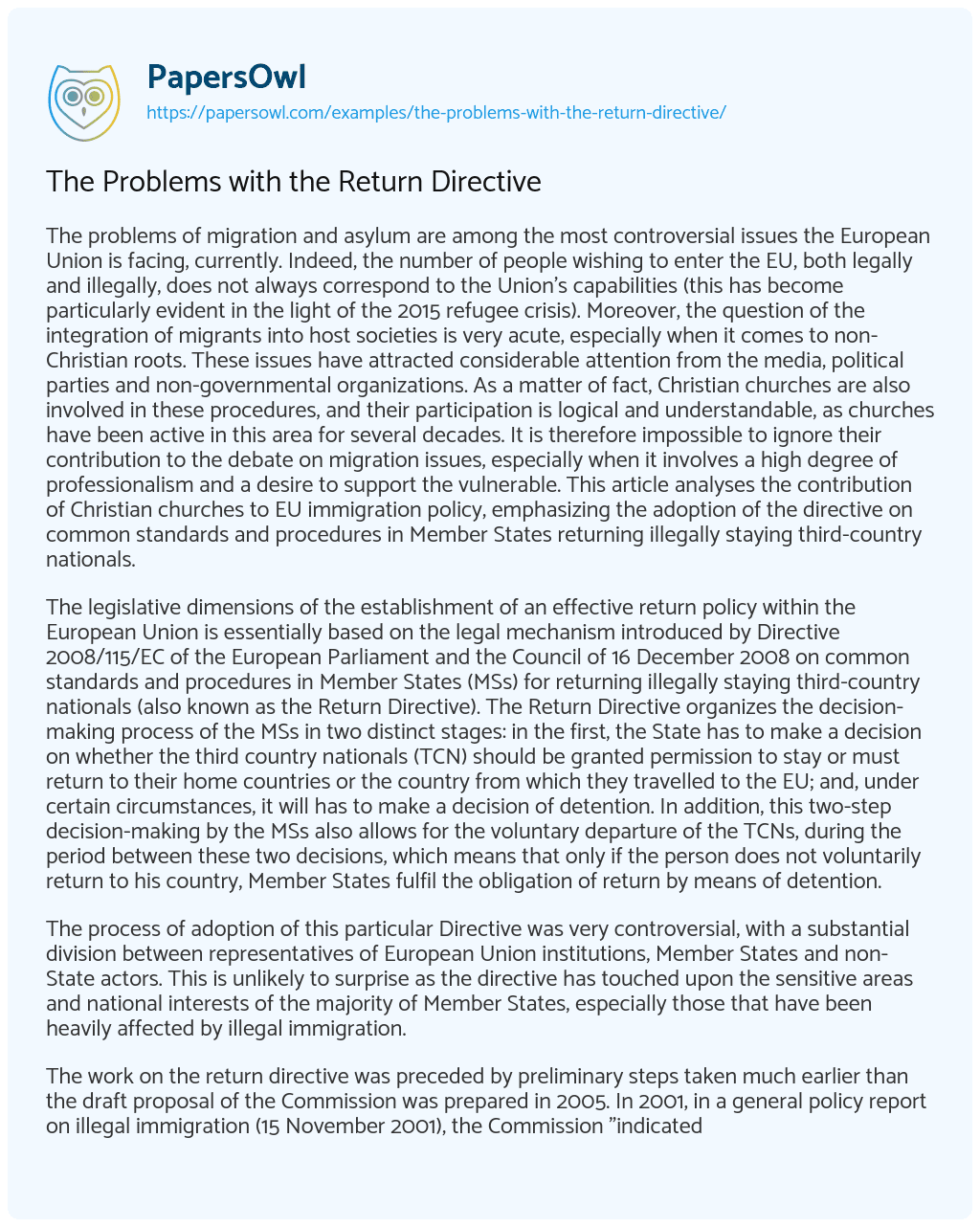 The problems of migration and asylum are among the most controversial issues the European Union is facing, currently. Indeed, the number of people wishing to enter the EU, both legally and illegally, does not always correspond to the Union’s capabilities (this has become particularly evident in the light of the 2015 refugee crisis). Moreover, the question of the integration of migrants into host societies is very acute, especially when it comes to non-Christian roots. These issues have attracted considerable attention from the media, political parties and non-governmental organizations. As a matter of fact, Christian churches are also involved in these procedures, and their participation is logical and understandable, as churches have been active in this area for several decades. It is therefore impossible to ignore their contribution to the debate on migration issues, especially when it involves a high degree of professionalism and a desire to support the vulnerable. This article analyses the contribution of Christian churches to EU immigration policy, emphasizing the adoption of the directive on common standards and procedures in Member States returning illegally staying third-country nationals.

The legislative dimensions of the establishment of an effective return policy within the European Union is essentially based on the legal mechanism introduced by Directive 2008/115/EC of the European Parliament and the Council of 16 December 2008 on common standards and procedures in Member States (MSs) for returning illegally staying third-country nationals (also known as the Return Directive). The Return Directive organizes the decision-making process of the MSs in two distinct stages: in the first, the State has to make a decision on whether the third country nationals (TCN) should be granted permission to stay or must return to their home countries or the country from which they travelled to the EU; and, under certain circumstances, it will has to make a decision of detention. In addition, this two-step decision-making by the MSs also allows for the voluntary departure of the TCNs, during the period between these two decisions, which means that only if the person does not voluntarily return to his country, Member States fulfil the obligation of return by means of detention.

The process of adoption of this particular Directive was very controversial, with a substantial division between representatives of European Union institutions, Member States and non-State actors. This is unlikely to surprise as the directive has touched upon the sensitive areas and national interests of the majority of Member States, especially those that have been heavily affected by illegal immigration.

The work on the return directive was preceded by preliminary steps taken much earlier than the draft proposal of the Commission was prepared in 2005. In 2001, in a general policy report on illegal immigration (15 November 2001), the Commission “indicated that the return policy is an integral and important part of the fight against illegal immigration”. Three elements were identified as the basis for the return policy: general principles, common standards and common measures. In February 2002, the Council adopted a plan of action to combat illegal migration.

The participation of Christian organizations in this process has been recorded almost from the very beginning, albeit at the level of public statements. The starting point was the publication of a joint commentary: In May 2002, Caritas, CCME, COMECE, ICMC, JRS Europe and QCEA expressed their views on this issue, suggesting some humane measures to combat illegal immigration. In particular, they talked about the need to open more opportunities for legal channels of immigration to the European Union (to reduce illegal) and not to exclude the possibility of legalization for those who live illegally. Christian organizations have pointed to poor and unstable conditions for many illegal immigrants who “work in unprotected conditions, many in the rural and agricultural sectors, provide cleaning and home care services, as well as apply their skills on construction sites and in restaurants and hotel services”. Commenting on return measures, Christian organizations expressed support for softer and more tolerant measures, such as the “priority principle of voluntary return over forced return”, and the “need to take into account the situation of human rights in the country with which the readmission agreement is planned to be concluded”.

In April 2002, the Commission submitted a green paper on the Community Return policy. On the basis of this document, public hearings were organized in July 2002 with the participation of representatives of COMECE and CCME. Christian organizations once again stressed the need for “clear, accessible and open procedures for legal labour migration in the EU” and “to improve the efficiency and quality of asylum procedures, as well as asylum policies that would make it possible to reach the territory of the Union in a lawful way”.

The representatives of the churches spoke of the need for the justice to ensure that the interests of the Member States of the European Union did not exceed those of the suffering people. In the explanatory notes annexed to the draft directive, the Commission summarized the main proposals from the NGOs, although the churches were not specifically mentioned.

During this legislative process, comments and declarations constituted only one aspect of the activities of Christian organizations. Other aspects included practical steps taken to promote the stated principles. Christian organizations (and secular NGOS) have held several meetings with members of the European Parliament. CCME and the Conference of European Churches (CEC) in cooperation with Caritas Europa and COMECE “wrote a letter to the Presidents of the European Parliament, the European Commission and the Council of the EU to express the concerns of the churches” [7. P. 5]. The meetings were held with the EU presidency in Slovenia and the President of the European Parliament in Strasbourg [7. P. 5]. However, it is difficult to assess how active Christian organizations were in their lobbying activities. The agenda and content of the meetings were not publicly disclosed. Moreover, it was not possible to observe the active role of national churches, which could, in principle, try to influence the position of the Member States (which is very important for changing the Council’s views). It is obvious that Christian organizations have engaged in various activities, but their scope and intensity remain the subject of contradictory interpretations.

Migration and asylum are areas in which the churches have extensive practical experience as they have worked with migrants and asylum-seekers long before the European Union has acquired sufficient competence in this field. However, we must understand that in most cases the work is done not by the churches themselves, but by various Christian organizations that cannot be equated with the churches. In fact, these special structures were created by the churches for more focused tasks and responsibilities. These organizations, which work at the European level, are now firmly established in Brussels, and their work covers some broad areas and different methods to achieve their goals. At first sight (and in terms of their legal status) Church NGOS may look like secular NGOS working on the same issues. The main difference here is, first, a closer relationship with the churches and, secondly, recognition of the religious origin of the values and principles that inspire their work.

In general, we can recognize that Christian organizations, with their experience and knowledge, have proven to be respected partners of the European Union in the field of migration and asylum policy. They are able to interact at a high level with both the European Commission and the European Parliament. Their presence is evident in the amendments proposed and sometimes adopted during the legislative process. Of course, it is hardly possible to ignore the fact that many of the proposals of Christian organizations, as can be seen from the adoption of the directive on return, have not been taken into account. However, this should not be seen as a reason to underestimate the influence of churches. In fact, the scope of the church’s activities in this area may not be as substantial as, for example, the fundamental documents of the European Union (i.e. the Constitution). Second, even those politicians who are very respectful of the churches do not necessarily follow their advice on migration issues [21]. One reason for this is the predominance of the view that bioethics, family and morality are of much greater importance to the Christian community than the promotion of legislation aimed at taking care of illegal immigrants and Such categories of “foreigners” on the territory of the European Union. Finally, the resources of the churches are limited and sometimes focused on specific projects, while the interaction with the European Union is limited partly because of the lack of interest on both sides.

We cannot, of course, exaggerate the level of influence of Christian organizations, but with limited resources at their disposal and in circumstances where the views of Member States differ greatly, Church NGOS are indeed those that cannot ignored or ignored. With the increasing level of expertise, it is even likely that they will be able to exert more influence in the future than now.

The Problems with the Return Directive. (2021, Mar 18). Retrieved from https://papersowl.com/examples/the-problems-with-the-return-directive/

The Netherlands on Combating Xenophobia and Racism

History and Evolution of Federalism