The Pedestrian by Ray Bradbury Analysis 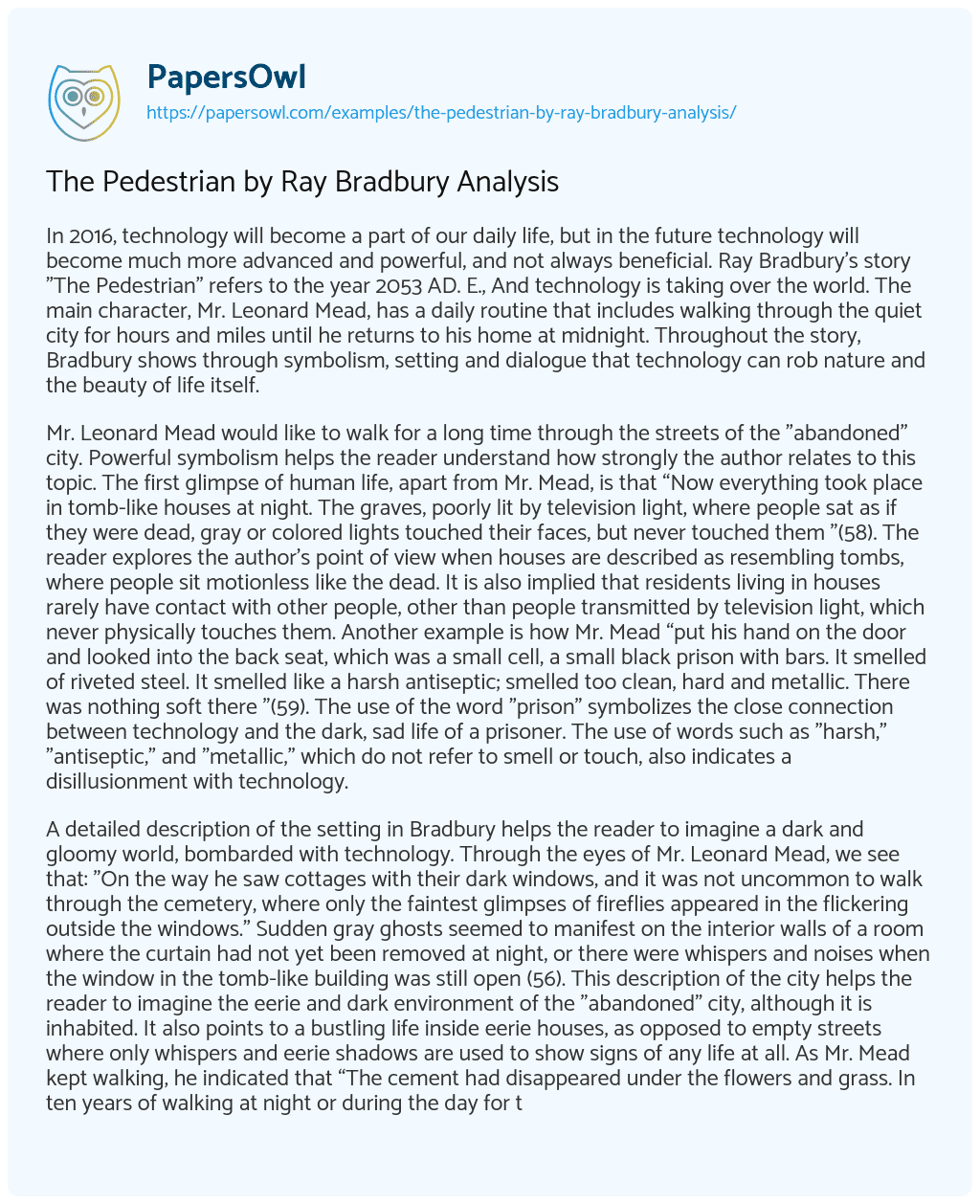 In 2016, technology will become a part of our daily life, but in the future technology will become much more advanced and powerful, and not always beneficial. Ray Bradbury’s story “The Pedestrian” refers to the year 2053 AD. E., And technology is taking over the world. The main character, Mr. Leonard Mead, has a daily routine that includes walking through the quiet city for hours and miles until he returns to his home at midnight. Throughout the story, Bradbury shows through symbolism, setting and dialogue that technology can rob nature and the beauty of life itself.

Mr. Leonard Mead would like to walk for a long time through the streets of the “abandoned” city. Powerful symbolism helps the reader understand how strongly the author relates to this topic. The first glimpse of human life, apart from Mr. Mead, is that “Now everything took place in tomb-like houses at night. The graves, poorly lit by television light, where people sat as if they were dead, gray or colored lights touched their faces, but never touched them ”(58). The reader explores the author’s point of view when houses are described as resembling tombs, where people sit motionless like the dead. It is also implied that residents living in houses rarely have contact with other people, other than people transmitted by television light, which never physically touches them. Another example is how Mr. Mead “put his hand on the door and looked into the back seat, which was a small cell, a small black prison with bars. It smelled of riveted steel. It smelled like a harsh antiseptic; smelled too clean, hard and metallic. There was nothing soft there ”(59). The use of the word “prison” symbolizes the close connection between technology and the dark, sad life of a prisoner. The use of words such as “harsh,” “antiseptic,” and “metallic,” which do not refer to smell or touch, also indicates a disillusionment with technology.

A detailed description of the setting in Bradbury helps the reader to imagine a dark and gloomy world, bombarded with technology. Through the eyes of Mr. Leonard Mead, we see that: “On the way he saw cottages with their dark windows, and it was not uncommon to walk through the cemetery, where only the faintest glimpses of fireflies appeared in the flickering outside the windows.” Sudden gray ghosts seemed to manifest on the interior walls of a room where the curtain had not yet been removed at night, or there were whispers and noises when the window in the tomb-like building was still open (56). This description of the city helps the reader to imagine the eerie and dark environment of the “abandoned” city, although it is inhabited. It also points to a bustling life inside eerie houses, as opposed to empty streets where only whispers and eerie shadows are used to show signs of any life at all. As Mr. Mead kept walking, he indicated that “The cement had disappeared under the flowers and grass. In ten years of walking at night or during the day for thousands of miles, he never met another walking person, not one in all this time ”(57). No cement means no people who actually walk and use the sidewalk. The quote also states that for ten years, Mr. Mead has never met a single soul going outside that leaves unnecessary pavement to disappear under the grass and mud.

Today newspapers and magazines are still popular and are sold in almost every supermarket, restaurant and pharmacy. Through the dialogue between the police car and Mr. Leonard Mead, the reader is informed about the future and how technology has radically changed the world. Through Mr. Mead, the reader will know that he is a writer, but “he hasn’t written in years. Magazines and books are no longer for sale. Everything happened at night in houses that look like tombs (58). ” The context of the sentence helps to understand that tomb-like houses are televisions. All the information that every person should know is broadcast on television, and books, newspapers or magazines are no longer needed. From the dialogue between the police car, the reader learns that a letter written in 2053 classifies the police car as “Business or profession? I think you could call me a writer. No profession, said the police car, as if talking to itself ”(58). Because technology is so widespread, writing is no longer considered a profession. The police car devalued his profession, as if it no longer mattered. Besides the fact that the letter is insignificant, the police car finds it strange that Mr. Mead “Just walking, Mr. Mead. Yes. But you did not explain for what purpose I explained: for air and in order to see and just walk ”(59). The police car cannot grasp the fact that Mr. Meade walks for air when there is air conditioning, and that he goes to watch when there is TV, that he can watch whatever he wants from the comfort of his home.

Bradbury’s story implies that too much technology can isolate humans from nature and the world. At the end of the story, we learn that Mr. Leonard Mead was taken to a mental health center for issue of regressive tendencies in a police car. The irony is that technology, which should give someone more freedom and opportunity, is robbing what Leonard Mead cherished and is eagerly awaiting every day.

The Pedestrian by Ray Bradbury Analysis. (2021, May 10). Retrieved from https://papersowl.com/examples/the-pedestrian-by-ray-bradbury-analysis/

Analysis of a Dystopian Novel Fahrenheit 451 by Ray Bradbury

“The Veldt” by Ray Bradbury

Examples of Foreshadowing in Fahrenheit 451 by Ray Bradbury