The Meaning of “White Elephant” 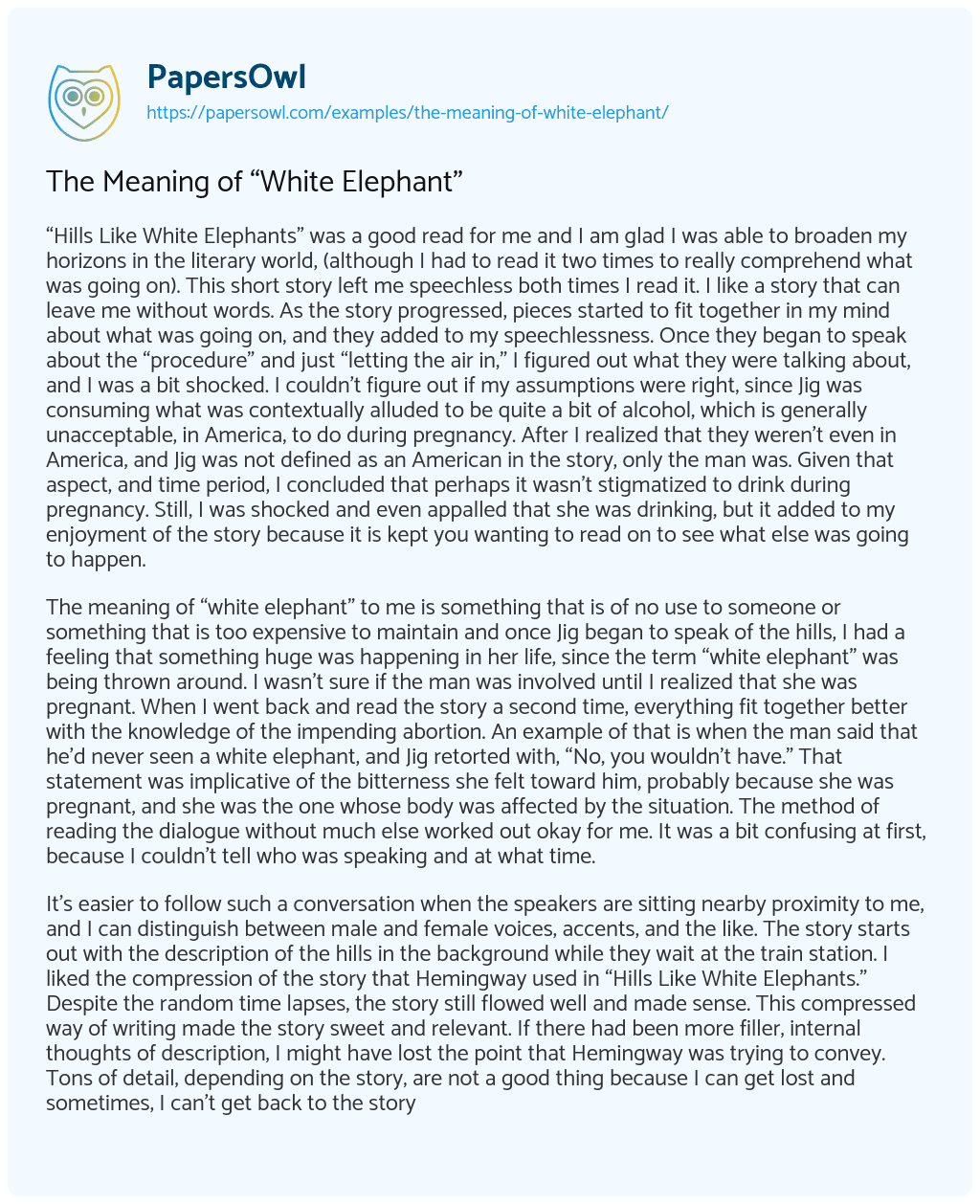 “Hills Like White Elephants” was a good read for me and I am glad I was able to broaden my horizons in the literary world, (although I had to read it two times to really comprehend what was going on). This short story left me speechless both times I read it. I like a story that can leave me without words. As the story progressed, pieces started to fit together in my mind about what was going on, and they added to my speechlessness. Once they began to speak about the “procedure” and just “letting the air in,” I figured out what they were talking about, and I was a bit shocked. I couldn’t figure out if my assumptions were right, since Jig was consuming what was contextually alluded to be quite a bit of alcohol, which is generally unacceptable, in America, to do during pregnancy. After I realized that they weren’t even in America, and Jig was not defined as an American in the story, only the man was. Given that aspect, and time period, I concluded that perhaps it wasn’t stigmatized to drink during pregnancy. Still, I was shocked and even appalled that she was drinking, but it added to my enjoyment of the story because it is kept you wanting to read on to see what else was going to happen.

The meaning of “white elephant” to me is something that is of no use to someone or something that is too expensive to maintain and once Jig began to speak of the hills, I had a feeling that something huge was happening in her life, since the term “white elephant” was being thrown around. I wasn’t sure if the man was involved until I realized that she was pregnant. When I went back and read the story a second time, everything fit together better with the knowledge of the impending abortion. An example of that is when the man said that he’d never seen a white elephant, and Jig retorted with, “No, you wouldn’t have.” That statement was implicative of the bitterness she felt toward him, probably because she was pregnant, and she was the one whose body was affected by the situation. The method of reading the dialogue without much else worked out okay for me. It was a bit confusing at first, because I couldn’t tell who was speaking and at what time.

It’s easier to follow such a conversation when the speakers are sitting nearby proximity to me, and I can distinguish between male and female voices, accents, and the like. The story starts out with the description of the hills in the background while they wait at the train station. I liked the compression of the story that Hemingway used in “Hills Like White Elephants.” Despite the random time lapses, the story still flowed well and made sense. This compressed way of writing made the story sweet and relevant. If there had been more filler, internal thoughts of description, I might have lost the point that Hemingway was trying to convey. Tons of detail, depending on the story, are not a good thing because I can get lost and sometimes, I can’t get back to the storyline. I liked the jumping from one subject, to another, to contemplation of one issue, to the desire for quiet. Both characters were on edge, which helped me understand the shortness and meaning behind each line.

I didn’t understand or appreciate the established setting. I simply couldn’t get a picture of it in my head, to picture the characters in the scene. I noticed the description in the first paragraph, but I would have liked a more extensive description. Some dialogue was vague and hard to understand. I understood the decision they were debating-abortion or keep the baby- but some of the other mini-conversations they had, was harder for me to decipher. I suppose that it could be intentionally vague, like Hemingway really wants us to have to evaluate what is happening and use deep thought to understand his words.

I could imagine myself in the position of Jig, and it seems like a scary position to be in. She is torn between what she wants to do, what the man wants her to do, and her fears. She’s worried about their futures, if he’ll still love her and if things will change between them if she wants to keep the baby. The time and place doesn’t make a difference in the ability to relate to Jig and put myself in her shoes. I can’t necessarily relate to the man, because I would not be so calm and collected about the topic of abortion if I were pregnant, or a man who found out that my partner was pregnant. If I could rewrite the story, I would include the final decision. I would detail if they decided to keep the baby, or get the abortion, because it is not clearly stated. The context implies the latter, but I would like to know if it actually happened. Despite the unclear ending, I would give this story 8 out of 10. I liked it. I liked the characters, I liked the mystery, I liked the “overheard” dialogue, and I like how I could sympathize with Jig.

The Meaning of “White Elephant”. (2020, Jan 20). Retrieved from https://papersowl.com/examples/the-meaning-of-white-elephant/

Analysis of “Hills Like White Elephant” and “Good Country People”