The Greater Impact of Symbolism in Literature 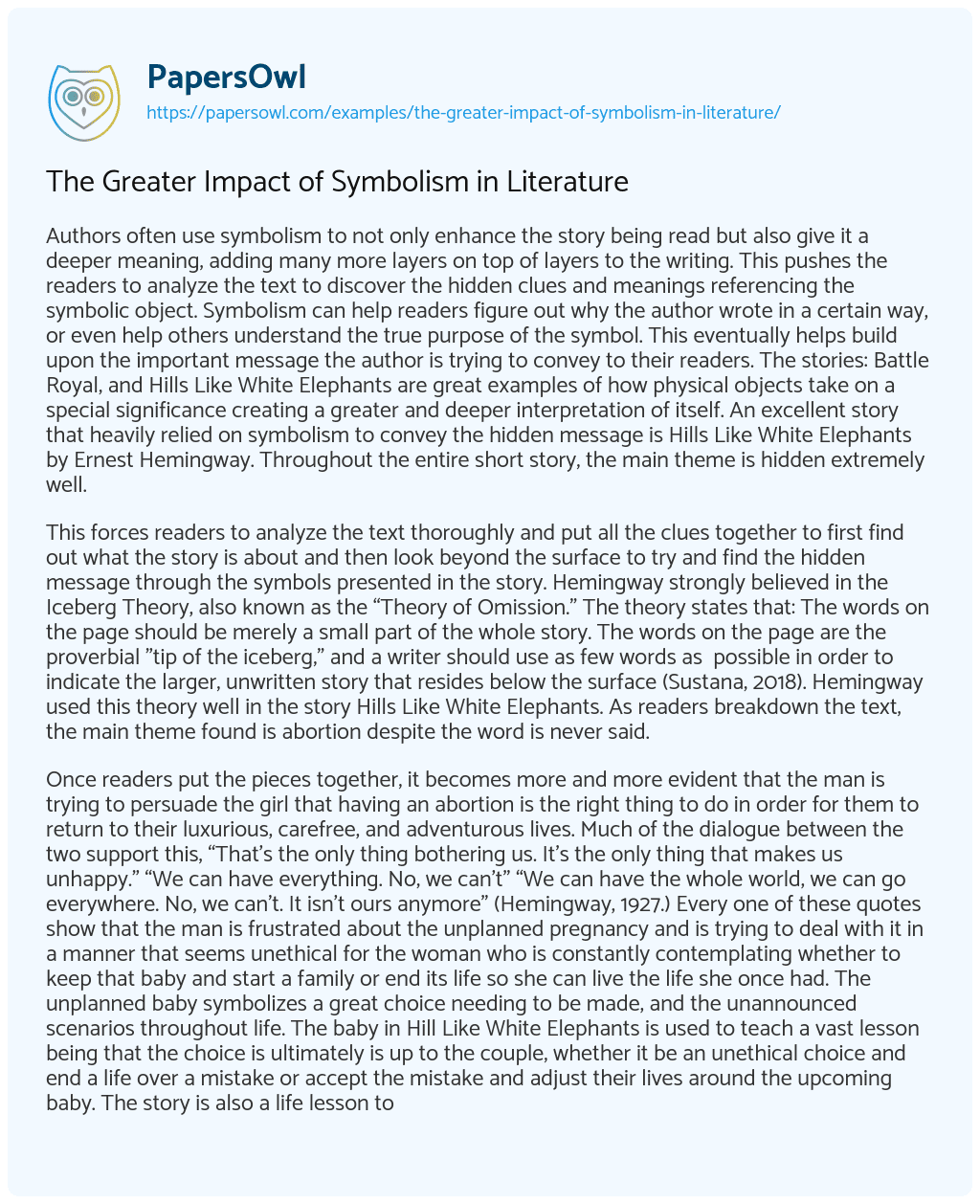 Authors often use symbolism to not only enhance the story being read but also give it a deeper meaning, adding many more layers on top of layers to the writing. This pushes the readers to analyze the text to discover the hidden clues and meanings referencing the symbolic object. Symbolism can help readers figure out why the author wrote in a certain way, or even help others understand the true purpose of the symbol. This eventually helps build upon the important message the author is trying to convey to their readers. The stories: Battle Royal, and Hills Like White Elephants are great examples of how physical objects take on a special significance creating a greater and deeper interpretation of itself. An excellent story that heavily relied on symbolism to convey the hidden message is Hills Like White Elephants by Ernest Hemingway. Throughout the entire short story, the main theme is hidden extremely well.

This forces readers to analyze the text thoroughly and put all the clues together to first find out what the story is about and then look beyond the surface to try and find the hidden message through the symbols presented in the story. Hemingway strongly believed in the Iceberg Theory, also known as the “Theory of Omission.” The theory states that: The words on the page should be merely a small part of the whole story. The words on the page are the proverbial “tip of the iceberg,” and a writer should use as few words as  possible in order to indicate the larger, unwritten story that resides below the surface (Sustana, 2018). Hemingway used this theory well in the story Hills Like White Elephants. As readers breakdown the text, the main theme found is abortion despite the word is never said.

Once readers put the pieces together, it becomes more and more evident that the man is trying to persuade the girl that having an abortion is the right thing to do in order for them to return to their luxurious, carefree, and adventurous lives. Much of the dialogue between the two support this, “That’s the only thing bothering us. It’s the only thing that makes us unhappy.” “We can have everything. No, we can’t” “We can have the whole world, we can go everywhere. No, we can’t. It isn’t ours anymore” (Hemingway, 1927.) Every one of these quotes show that the man is frustrated about the unplanned pregnancy and is trying to deal with it in a manner that seems unethical for the woman who is constantly contemplating whether to keep that baby and start a family or end its life so she can live the life she once had. The unplanned baby symbolizes a great choice needing to be made, and the unannounced scenarios throughout life. The baby in Hill Like White Elephants is used to teach a vast lesson being that the choice is ultimately is up to the couple, whether it be an unethical choice and end a life over a mistake or accept the mistake and adjust their lives around the upcoming baby. The story is also a life lesson to its readers, that life lesson is that life will constantly throw unforeseen obstacles and it is up to each individual to overcome each adversity. The story Hills Like White Elephants has symbolic themes that  carry over to modern times and the symbolic significance still shows readers how it can greatly impact a life. Battle Royal is another exceptional short story that used a symbol to convey a deeper message to the readers.

The narrator is the symbolic element that gives Battle Royal a deeper meaning. This is because the narrator symbolizes the African-American fight for equality in society (The Deeper Meaning to Battle Royal, 2019.) The narrator was the main character throughout the story who’d never give up no matter the circumstance. He endured and fought through the toughest challenges just to deliver a speech he wrote to open up the eyes of many racist white men who did not care for the black men trying to make a living and care for their families. “Cast down your bucket where you are, cast it down in making friends in every manly way of the people of all races by whom you are surrounded…” (Ellison, 1952.) His speech moved the audience and managed to impress one white man so much he was awarded a prize for his vitality. The narrator, throughout the whole story, was the embodiment of perseverance and dedication to achieve the end goal regardless of the consequences. African-Americans were constantly mistreated and were born into a societal system that put them at a disadvantage due to the color of their skin. The narrator had to humiliate himself in front of the audience to receive his scholarship, “Social responsibility…Louder…The room filled with laughter…You weren’t being smart, were you boy?” (Ellison, 1952.) Even while he was trying to give his speech, he was made fun of and not taken seriously. This translates to how African-Americans have to give up an arm and a leg just to get noticed so they can get ahead of the competition throughout life. The  narrator represented the nonstop push for African-American equality in the United States, and symbolizes the consistent stride to achieve greatness along the unfair road of life. The author hints at this message with the quote: “Keep This Nigger-Boy Running.” (Ellison, 1952) It shows that despite the disadvantages African-Americans face, they stayed strong and perused their dreams.

On the surface, the short story Battle Royal is just about a man who joins a fighting arena just to deliver a speech about equality to the watching white men, however after analyzing the text readers can see how the story goes much deeper by using the narrator as the great symbol representing the African-American struggle. The narrator does not simply portray a character fighting to get a scholarship in order to attend college, instead, he represents the strength, perseverance, and determination of African-Americans. These two authors both used symbolism in a creative way to create a deeper meaning throughout their story. Since the symbolic object had such a profound impact throughout both stories, the symbolic meaning and interpretation goes further beyond the object itself.

The way Hemingway used an unplanned pregnancy to tell a story that has themes that still apply to today is very impactful as well as Ellison when he wrote about a single character who represented the perseverance of the African-American community. The ingenious writing of these two authors shows how a symbolic object can lead to a deeper meaning of short stories.

The Greater Impact of Symbolism in Literature. (2021, Apr 24). Retrieved from https://papersowl.com/examples/the-greater-impact-of-symbolism-in-literature/

Contained in Stories from all over the World