The French Revolution and Louis XVI 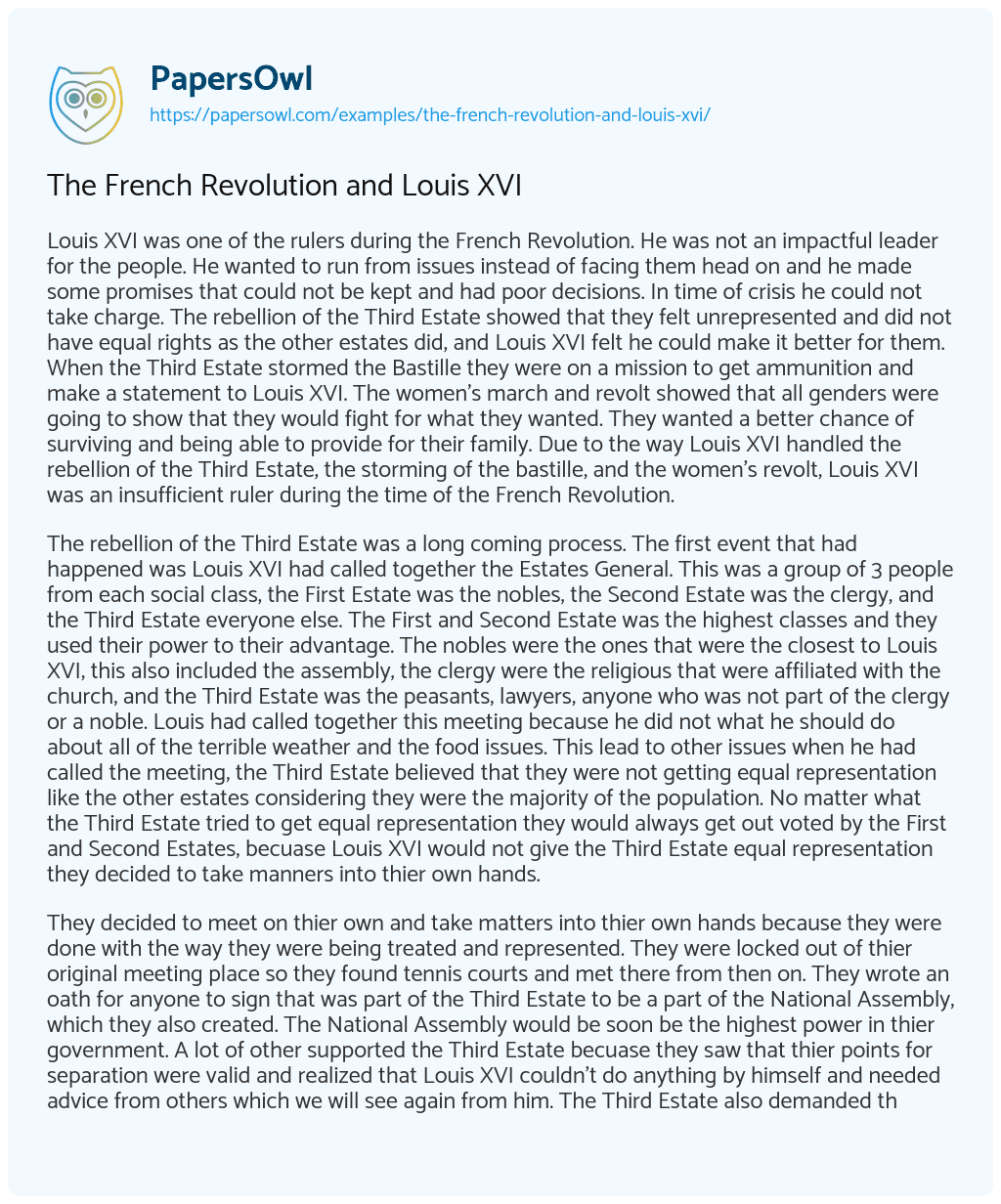 Louis XVI was one of the rulers during the French Revolution. He was not an impactful leader for the people. He wanted to run from issues instead of facing them head on and he made some promises that could not be kept and had poor decisions. In time of crisis he could not take charge. The rebellion of the Third Estate showed that they felt unrepresented and did not have equal rights as the other estates did, and Louis XVI felt he could make it better for them. When the Third Estate stormed the Bastille they were on a mission to get ammunition and make a statement to Louis XVI. The women’s march and revolt showed that all genders were going to show that they would fight for what they wanted. They wanted a better chance of surviving and being able to provide for their family. Due to the way Louis XVI handled the rebellion of the Third Estate, the storming of the bastille, and the women’s revolt, Louis XVI was an insufficient ruler during the time of the French Revolution.

They decided to meet on thier own and take matters into thier own hands because they were done with the way they were being treated and represented. They were locked out of thier original meeting place so they found tennis courts and met there from then on. They wrote an oath for anyone to sign that was part of the Third Estate to be a part of the National Assembly, which they also created. The National Assembly would be soon be the highest power in thier government. A lot of other supported the Third Estate becuase they saw that thier points for separation were valid and realized that Louis XVI couldn’t do anything by himself and needed advice from others which we will see again from him. The Third Estate also demanded that Louis XVI write a written constitution and give the Third Estate equal representation and the power to vote on matters that would affected them. The demand for the written constitution lead into the storming of the Bastille.

The Third Estate attacked the Bastille because of the need of ammunition because they had been able to acquire firearms and canons, this lead to other events and symbolism of the storming. The Third Estate knew that the Bastille would have ammunition and this would be a warning to Louis XVI that they wanted change and they were willing to make that happen. After they had stormed the Bastille the rest of the prisoners that had not escaped when they fired at it were let go. They guillotined the prisoner governor and his officers for the way they had treated the prisoners. The symbolism was different for all parties that were involved in it and knew about the storming. The royalty was confused by the meaning of the storming, they did not initially think that it was a storming. Louis XVI was the most confused becuase he did not think it was a revolt he thought.

The French Revolution and Louis XVI. (2019, Sep 01). Retrieved from https://papersowl.com/examples/the-french-revolution-and-louis-xvi/

The History of the French Revolution

The Great Changes during French Revolution