Causes of the French Revolution 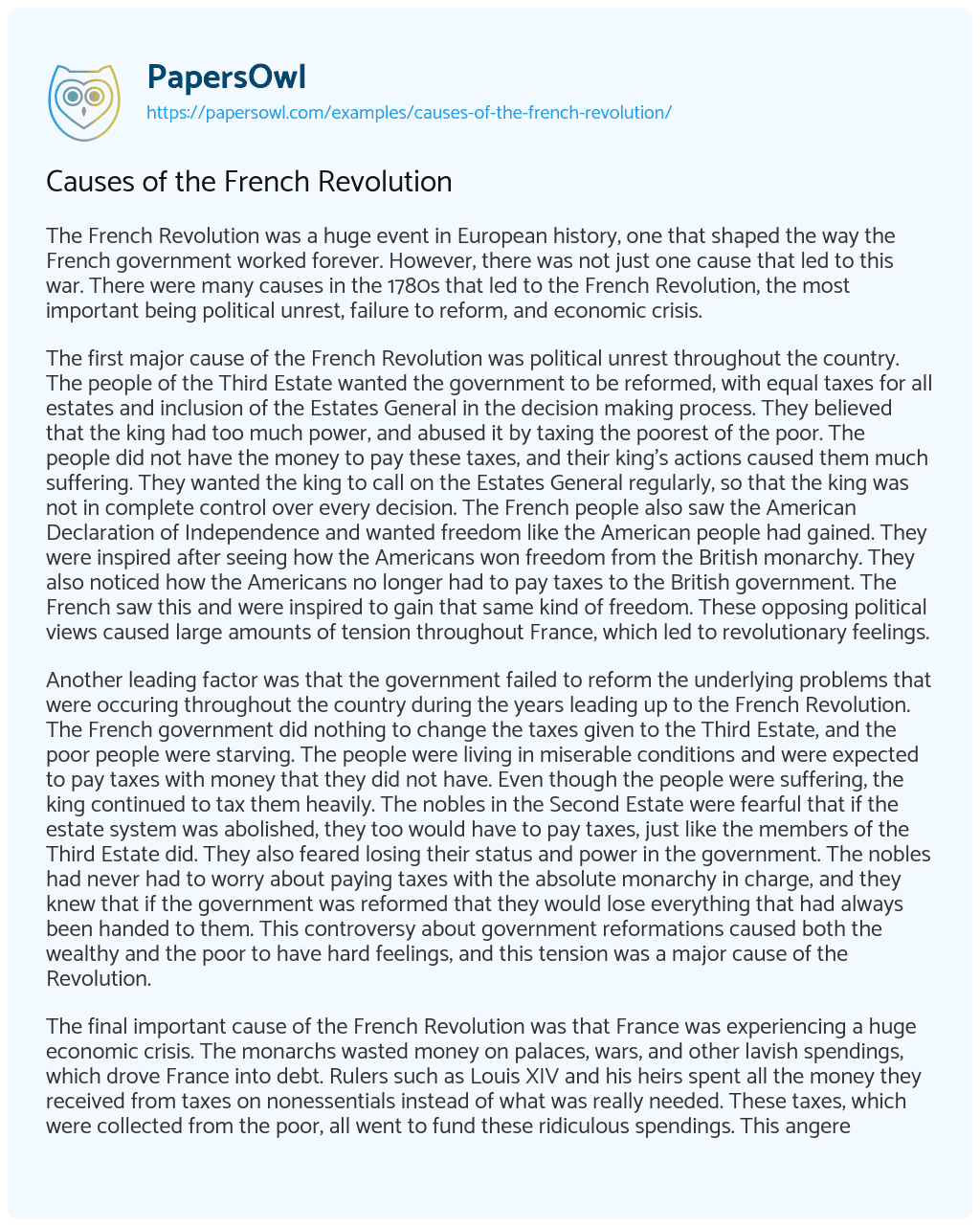 The first major cause of the French Revolution was political unrest throughout the country. The people of the Third Estate wanted the government to be reformed, with equal taxes for all estates and inclusion of the Estates General in the decision making process. They believed that the king had too much power, and abused it by taxing the poorest of the poor. The people did not have the money to pay these taxes, and their king’s actions caused them much suffering. They wanted the king to call on the Estates General regularly, so that the king was not in complete control over every decision. The French people also saw the American Declaration of Independence and wanted freedom like the American people had gained. They were inspired after seeing how the Americans won freedom from the British monarchy. They also noticed how the Americans no longer had to pay taxes to the British government. The French saw this and were inspired to gain that same kind of freedom. These opposing political views caused large amounts of tension throughout France, which led to revolutionary feelings.

Another leading factor was that the government failed to reform the underlying problems that were occuring throughout the country during the years leading up to the French Revolution. The French government did nothing to change the taxes given to the Third Estate, and the poor people were starving. The people were living in miserable conditions and were expected to pay taxes with money that they did not have. Even though the people were suffering, the king continued to tax them heavily. The nobles in the Second Estate were fearful that if the estate system was abolished, they too would have to pay taxes, just like the members of the Third Estate did. They also feared losing their status and power in the government. The nobles had never had to worry about paying taxes with the absolute monarchy in charge, and they knew that if the government was reformed that they would lose everything that had always been handed to them. This controversy about government reformations caused both the wealthy and the poor to have hard feelings, and this tension was a major cause of the Revolution.

The final important cause of the French Revolution was that France was experiencing a huge economic crisis. The monarchs wasted money on palaces, wars, and other lavish spendings, which drove France into debt. Rulers such as Louis XIV and his heirs spent all the money they received from taxes on nonessentials instead of what was really needed. These taxes, which were collected from the poor, all went to fund these ridiculous spendings. This angered many French peasants. They eventually spent more money than they actually had, which led France into a period of debt. There was also a bad harvest, which led to increased prices of food, most notably the increased price of bread. The French people could not afford these higher prices and were starving. They were angry with the monarchs for not being able to get them out of their terrible situation, which led them to participate in bread riots. The increase in poverty due to this economic crisis triggered the first violent movements of the French Revolution.

Causes of the French Revolution. (2019, Apr 10). Retrieved from https://papersowl.com/examples/causes-of-the-french-revolution/

Was the French Revolution Successful