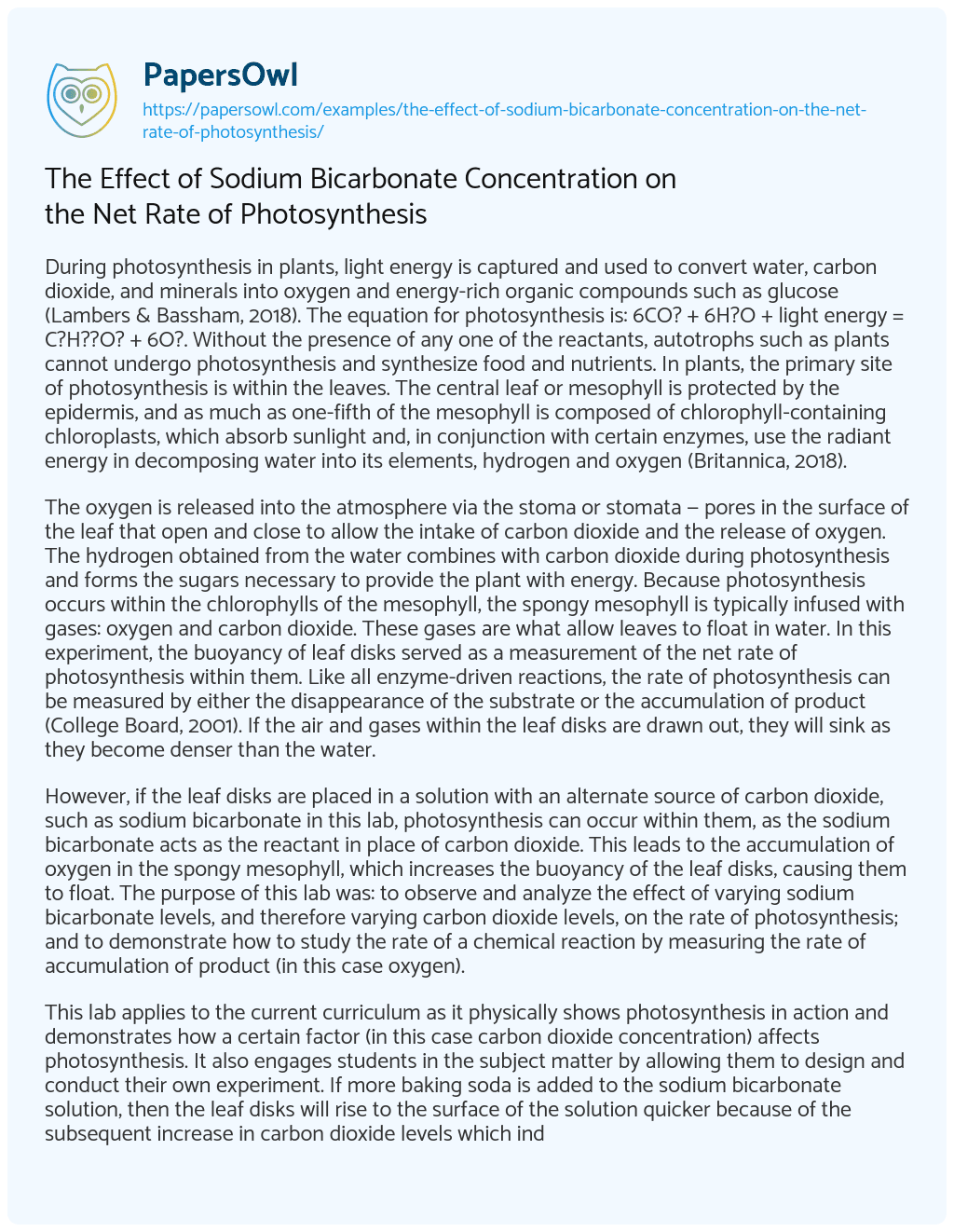 During photosynthesis in plants, light energy is captured and used to convert water, carbon dioxide, and minerals into oxygen and energy-rich organic compounds such as glucose (Lambers & Bassham, 2018). The equation for photosynthesis is: 6CO? + 6H?O + light energy = C?H??O? + 6O?. Without the presence of any one of the reactants, autotrophs such as plants cannot undergo photosynthesis and synthesize food and nutrients. In plants, the primary site of photosynthesis is within the leaves. The central leaf or mesophyll is protected by the epidermis, and as much as one-fifth of the mesophyll is composed of chlorophyll-containing chloroplasts, which absorb sunlight and, in conjunction with certain enzymes, use the radiant energy in decomposing water into its elements, hydrogen and oxygen (Britannica, 2018).

The oxygen is released into the atmosphere via the stoma or stomata — pores in the surface of the leaf that open and close to allow the intake of carbon dioxide and the release of oxygen. The hydrogen obtained from the water combines with carbon dioxide during photosynthesis and forms the sugars necessary to provide the plant with energy. Because photosynthesis occurs within the chlorophylls of the mesophyll, the spongy mesophyll is typically infused with gases: oxygen and carbon dioxide. These gases are what allow leaves to float in water. In this experiment, the buoyancy of leaf disks served as a measurement of the net rate of photosynthesis within them. Like all enzyme-driven reactions, the rate of photosynthesis can be measured by either the disappearance of the substrate or the accumulation of product (College Board, 2001). If the air and gases within the leaf disks are drawn out, they will sink as they become denser than the water.

This lab applies to the current curriculum as it physically shows photosynthesis in action and demonstrates how a certain factor (in this case carbon dioxide concentration) affects photosynthesis. It also engages students in the subject matter by allowing them to design and conduct their own experiment. If more baking soda is added to the sodium bicarbonate solution, then the leaf disks will rise to the surface of the solution quicker because of the subsequent increase in carbon dioxide levels which induces photosynthesis in the presence of light and leads to the accumulation of oxygen in the air spaces of the spongy mesophyll.

The Effect of Sodium Bicarbonate Concentration on the Net Rate of Photosynthesis. (2019, Nov 25). Retrieved from https://papersowl.com/examples/the-effect-of-sodium-bicarbonate-concentration-on-the-net-rate-of-photosynthesis/

Why is Photosynthesis Important?

Idea of Photosynthesis by Jan Ingenhousz

Photosynthesis Vs. Cellular Respiration the Major Processess in a Global Balance