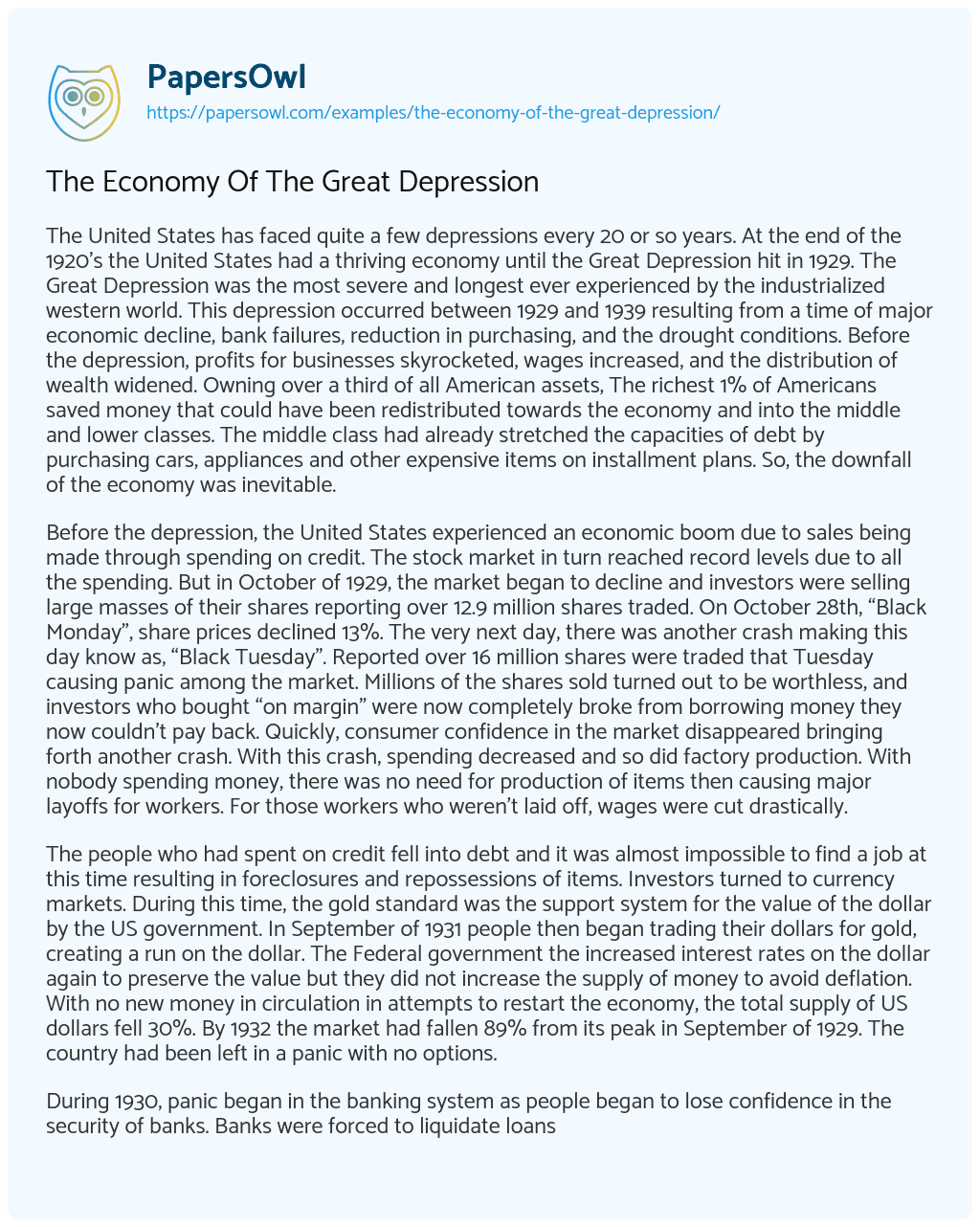 The United States has faced quite a few depressions every 20 or so years. At the end of the 1920’s the United States had a thriving economy until the Great Depression hit in 1929. The Great Depression was the most severe and longest ever experienced by the industrialized western world. This depression occurred between 1929 and 1939 resulting from a time of major economic decline, bank failures, reduction in purchasing, and the drought conditions. Before the depression, profits for businesses skyrocketed, wages increased, and the distribution of wealth widened. Owning over a third of all American assets, The richest 1% of Americans saved money that could have been redistributed towards the economy and into the middle and lower classes. The middle class had already stretched the capacities of debt by purchasing cars, appliances and other expensive items on installment plans. So, the downfall of the economy was inevitable.

Before the depression, the United States experienced an economic boom due to sales being made through spending on credit. The stock market in turn reached record levels due to all the spending. But in October of 1929, the market began to decline and investors were selling large masses of their shares reporting over 12.9 million shares traded. On October 28th, “Black Monday”, share prices declined 13%. The very next day, there was another crash making this day know as, “Black Tuesday”. Reported over 16 million shares were traded that Tuesday causing panic among the market. Millions of the shares sold turned out to be worthless, and investors who bought “on margin” were now completely broke from borrowing money they now couldn’t pay back. Quickly, consumer confidence in the market disappeared bringing forth another crash. With this crash, spending decreased and so did factory production. With nobody spending money, there was no need for production of items then causing major layoffs for workers. For those workers who weren’t laid off, wages were cut drastically.

The people who had spent on credit fell into debt and it was almost impossible to find a job at this time resulting in foreclosures and repossessions of items. Investors turned to currency markets. During this time, the gold standard was the support system for the value of the dollar by the US government. In September of 1931 people then began trading their dollars for gold, creating a run on the dollar. The Federal government the increased interest rates on the dollar again to preserve the value but they did not increase the supply of money to avoid deflation. With no new money in circulation in attempts to restart the economy, the total supply of US dollars fell 30%. By 1932 the market had fallen 89% from its peak in September of 1929. The country had been left in a panic with no options.

During 1930, panic began in the banking system as people began to lose confidence in the security of banks. Banks were forced to liquidate loans to make up for their insufficient cash for the investors demanding deposits also known as, bank runs. With no money to lend to people in businesses or to farmers, the crisis escalated quickly. 744 US banks went under bankruptcy just in the first 10 months alone and all those who had money in those banks lost every penny. With the large amount of demands for their savings, people began to grow angry and it was not uncommon to see masses of people at bank for these bank runs. These runs continued from 1930 all the way to 1933. In some cases, bank runs would be started by simple rumors from people talking. By this time in 1933, 11,000 of the nation’s 25,000 banks had shut down and those who deposited lost approximately $140 billion. People had lost all their money and had been left nothing.

People were still overwhelmed and feared more potential economic woes, causing people from all economic classes to stop purchasing. With this crash, spending decreased and so did factory production. With nobody spending money, there was no need for production of items then causing major layoffs for workers. For those workers who weren’t laid off, wages were cut drastically. The people who had spent on credit fell into debt and it was almost impossible to find a job at this time resulting in foreclosures and repossessions of items. With the decline of shopping, a reduction of the items being produced dramatically decreased then causing a reduction in employees and their wages. With the unemployment rates increasing, paying off items bought on payment plans become almost impossible then leading to those items repossessed. At this point the unemployment rate rose beyond 25%. By 1933, at the depression’s lowest point, around 15 million Americans were unemployed.

The cause of the drought in the 1930’s was a mixture of things. One which being that the land had been over farmed. The land was naturally a grass land when settlers moved there and either farmed or land or had livestock on it. The farmers plowed all of the natural grasses and replaced them with mostly wheat, which then changed the environment, allowing the land to dry up along with the shortage of rain. Another issue was that those who were ranching, many of them allowed their livestock to over graze the lands which caused most of their grass to be gone and allowed the winds of the great plains to dry out the grounds and cause the dust bowl. The dust bowl made it hard for the farmers and ranchers to have crops grow or to have food for their livestock. This cause a massive shortage on food and supplies for the already struggling US economy because this was an era where many of the countries crops and livestock came from. It forced the country into a food shortage which raised the price of the foods they already had in stock. The drought in the Mississippi Valley at this time was so destructive that farmers and land owners could not pay taxes or other debts, that when selling their lands and farms, they received no profit from the sales for themselves. Many families ended up homeless and some moved to towns called, “Hoovervilles,” named after the president at the time, Herbert Hoover.

The Economy Of The Great Depression. (2022, Feb 10). Retrieved from https://papersowl.com/examples/the-economy-of-the-great-depression/