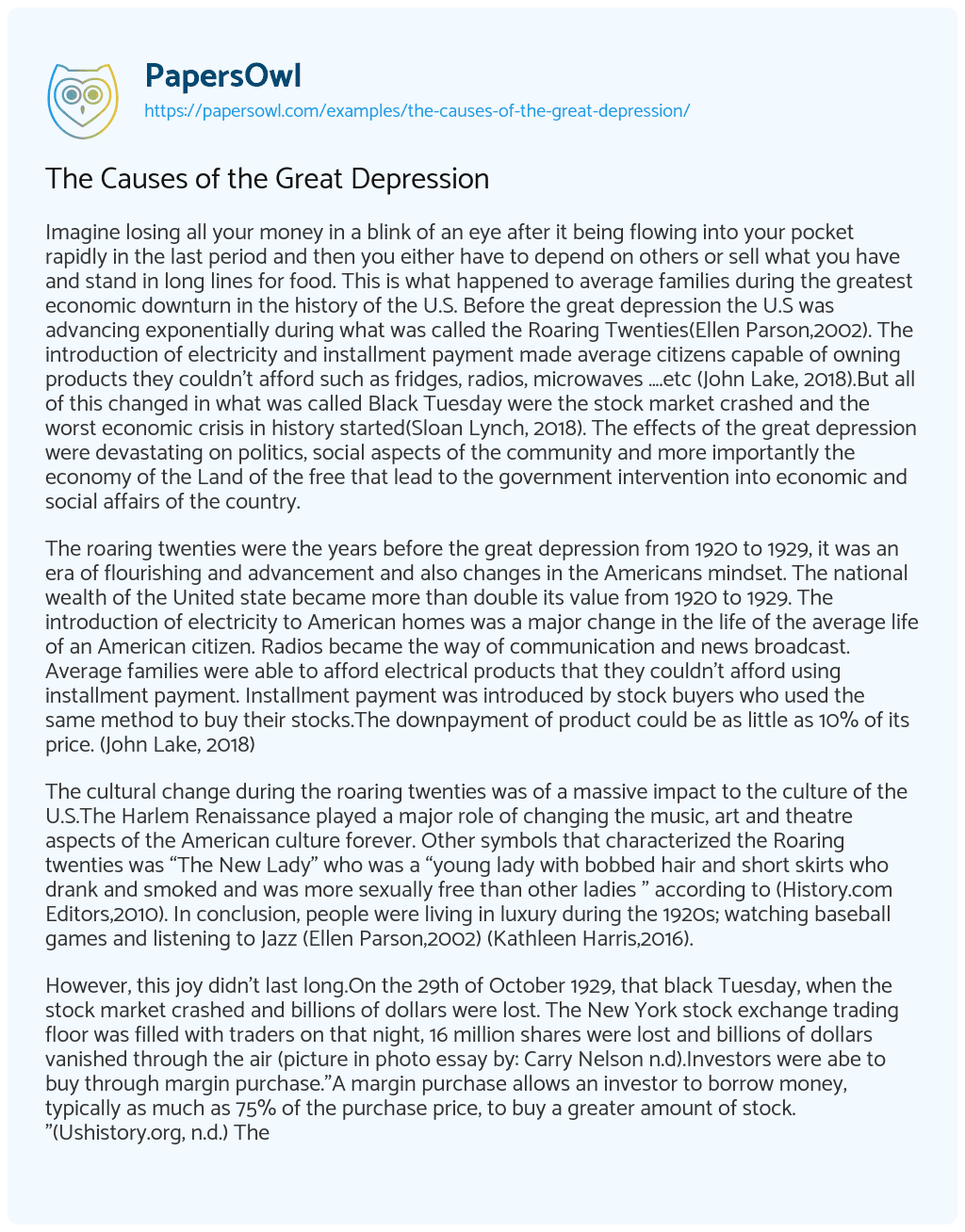 Imagine losing all your money in a blink of an eye after it being flowing into your pocket rapidly in the last period and then you either have to depend on others or sell what you have and stand in long lines for food. This is what happened to average families during the greatest economic downturn in the history of the U.S. Before the great depression the U.S was advancing exponentially during what was called the Roaring Twenties(Ellen Parson,2002). The introduction of electricity and installment payment made average citizens capable of owning products they couldn’t afford such as fridges, radios, microwaves ….etc (John Lake, 2018).But all of this changed in what was called Black Tuesday were the stock market crashed and the worst economic crisis in history started(Sloan Lynch, 2018). The effects of the great depression were devastating on politics, social aspects of the community and more importantly the economy of the Land of the free that lead to the government intervention into economic and social affairs of the country.

The roaring twenties were the years before the great depression from 1920 to 1929, it was an era of flourishing and advancement and also changes in the Americans mindset. The national wealth of the United state became more than double its value from 1920 to 1929. The introduction of electricity to American homes was a major change in the life of the average life of an American citizen. Radios became the way of communication and news broadcast. Average families were able to afford electrical products that they couldn’t afford using installment payment. Installment payment was introduced by stock buyers who used the same method to buy their stocks.The downpayment of product could be as little as 10% of its price. (John Lake, 2018)

The cultural change during the roaring twenties was of a massive impact to the culture of the U.S.The Harlem Renaissance played a major role of changing the music, art and theatre aspects of the American culture forever. Other symbols that characterized the Roaring twenties was “The New Lady” who was a “young lady with bobbed hair and short skirts who drank and smoked and was more sexually free than other ladies ” according to (History.com Editors,2010). In conclusion, people were living in luxury during the 1920s; watching baseball games and listening to Jazz (Ellen Parson,2002) (Kathleen Harris,2016).

However, this joy didn’t last long.On the 29th of October 1929, that black Tuesday, when the stock market crashed and billions of dollars were lost. The New York stock exchange trading floor was filled with traders on that night, 16 million shares were lost and billions of dollars vanished through the air (picture in photo essay by: Carry Nelson n.d).Investors were abe to buy through margin purchase.”A margin purchase allows an investor to borrow money, typically as much as 75% of the purchase price, to buy a greater amount of stock. ”(Ushistory.org, n.d.) The cause of the market crash was mainly due to the investors belief that if a stock is going to sell,they will be willing to pay more for it so they rise its value ”(Ushistory.org, n.d.).But when they feel thats its price may fall they will try to sell it and when all investors try to sell at once no one will buy ad the market value will decrease and that’s exactly what happened ”(Ushistory.org, n.d.).This panic sell began on Thursday October 24th 1929 and continued and by the end of the day on the Black Tuesday panic has erupted and stocks were being sold for even less value and in 10 weeks time the stock market value halved. ”(Ushistory.org, n.d.)

This market was blamed to be the incentive of the great depression yet it was more of a symptom of it.It shaked the American economic confidence and made an end to the loans America extended over European countries that were recovering from World War 1.(abc-clio,2018) The stock market crash, bank failures and business practises all lead to the great depression (Sloan Lynch, 2018)The worst economic disaster in the history of the US. The Great Depression lasted roughly 12 years and was ended by World War 2.It devastated the American economy and produced financial hardships for millions of people.

Everyday life changed for every class during the great depression. More than a quarter of the population became jobless and had no income. That was about 15 million people were out of work. A third of the children couldn’t attend public schools as schools didn’t have the budget to open (Sloan Lynch, 2018). Most of the people who didn’t lose their job had either their wages reduced or their schedules became part time schedules. Unemployed men and homeless people had to go to soap kitchens and “Hoovervilles”(were name after president Herbert Hoover, Hoovervilles were shanty houses built for homeless people) to get meals and shelters.(abc-clio,2018) (Sloan Lynch, 2018)

During the Great Depression, half of the banks failed and by 1933 4,000 banks have failed.Even big banks run out of business as when people knew the banks used their money on investing in the stock market they were shocked and they ran to take money from banks. Jack Bates,one of the survivors of the great depression, says: ”farmers had no money during the depression”. He also says his father was a dentist and when some farmers came to his clinic they had to pay with the products of their farm like chicken, eggs,ducks and geese.(Adam Bird,2012)

The Causes of the Great Depression. (2022, Feb 10). Retrieved from https://papersowl.com/examples/the-causes-of-the-great-depression/