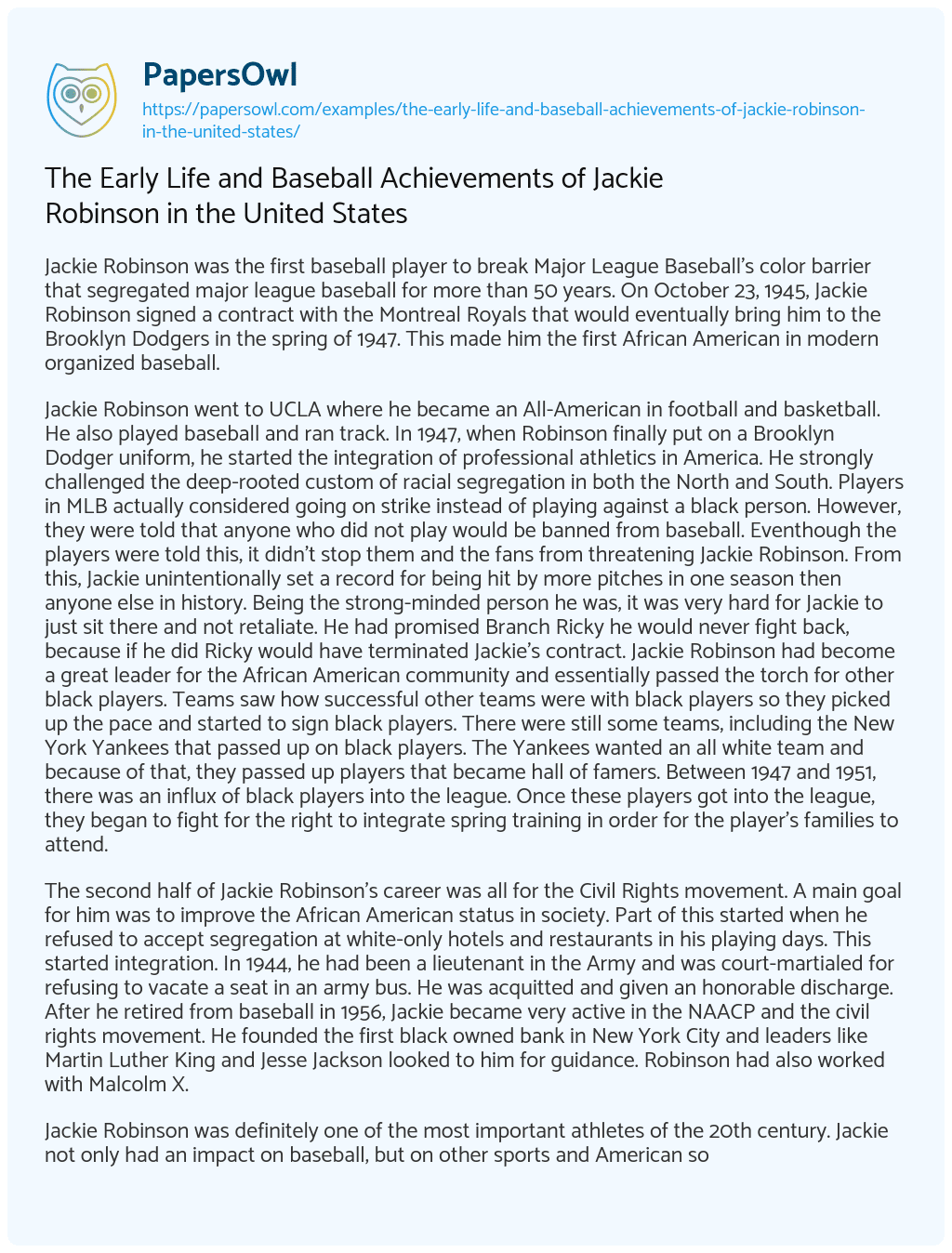 Jackie Robinson was the first baseball player to break Major League Baseball’s color barrier that segregated major league baseball for more than 50 years. On October 23, 1945, Jackie Robinson signed a contract with the Montreal Royals that would eventually bring him to the Brooklyn Dodgers in the spring of 1947. This made him the first African American in modern organized baseball.

Jackie Robinson went to UCLA where he became an All-American in football and basketball. He also played baseball and ran track. In 1947, when Robinson finally put on a Brooklyn Dodger uniform, he started the integration of professional athletics in America. He strongly challenged the deep-rooted custom of racial segregation in both the North and South. Players in MLB actually considered going on strike instead of playing against a black person. However, they were told that anyone who did not play would be banned from baseball. Eventhough the players were told this, it didn’t stop them and the fans from threatening Jackie Robinson. From this, Jackie unintentionally set a record for being hit by more pitches in one season then anyone else in history. Being the strong-minded person he was, it was very hard for Jackie to just sit there and not retaliate. He had promised Branch Ricky he would never fight back, because if he did Ricky would have terminated Jackie’s contract. Jackie Robinson had become a great leader for the African American community and essentially passed the torch for other black players. Teams saw how successful other teams were with black players so they picked up the pace and started to sign black players. There were still some teams, including the New York Yankees that passed up on black players. The Yankees wanted an all white team and because of that, they passed up players that became hall of famers. Between 1947 and 1951, there was an influx of black players into the league. Once these players got into the league, they began to fight for the right to integrate spring training in order for the player’s families to attend.

The second half of Jackie Robinson’s career was all for the Civil Rights movement. A main goal for him was to improve the African American status in society. Part of this started when he refused to accept segregation at white-only hotels and restaurants in his playing days. This started integration. In 1944, he had been a lieutenant in the Army and was court-martialed for refusing to vacate a seat in an army bus. He was acquitted and given an honorable discharge. After he retired from baseball in 1956, Jackie became very active in the NAACP and the civil rights movement. He founded the first black owned bank in New York City and leaders like Martin Luther King and Jesse Jackson looked to him for guidance. Robinson had also worked with Malcolm X.

Jackie Robinson was definitely one of the most important athletes of the 20th century. Jackie not only had an impact on baseball, but on other sports and American society as well. Besides being a great athlete, he was also a civil rights champion and community activist. Jackie Robinson had the courage to stand alone in a very tough situation where a lot of other people would most likely need help. Jackie certainly revolutionized the way the game was played and great athletes like Arthur Ashe and Kareem Abdul-Jabbar have praised Jackie for impacting their lives. Many say that if Robinson hadn’t broken the color barrier, someone else would have. That is true but nobody would have done it the way Jackie did it. Not too many players even these days have the kind of talent he had. Jackie Robinson touched many lives. He said it best when he said, “A life is not important except in the impact it has on other lives”. Number 42 did just that.

The Early Life and Baseball Achievements of Jackie Robinson in the United States. (2022, Nov 23). Retrieved from https://papersowl.com/examples/the-early-life-and-baseball-achievements-of-jackie-robinson-in-the-united-states/