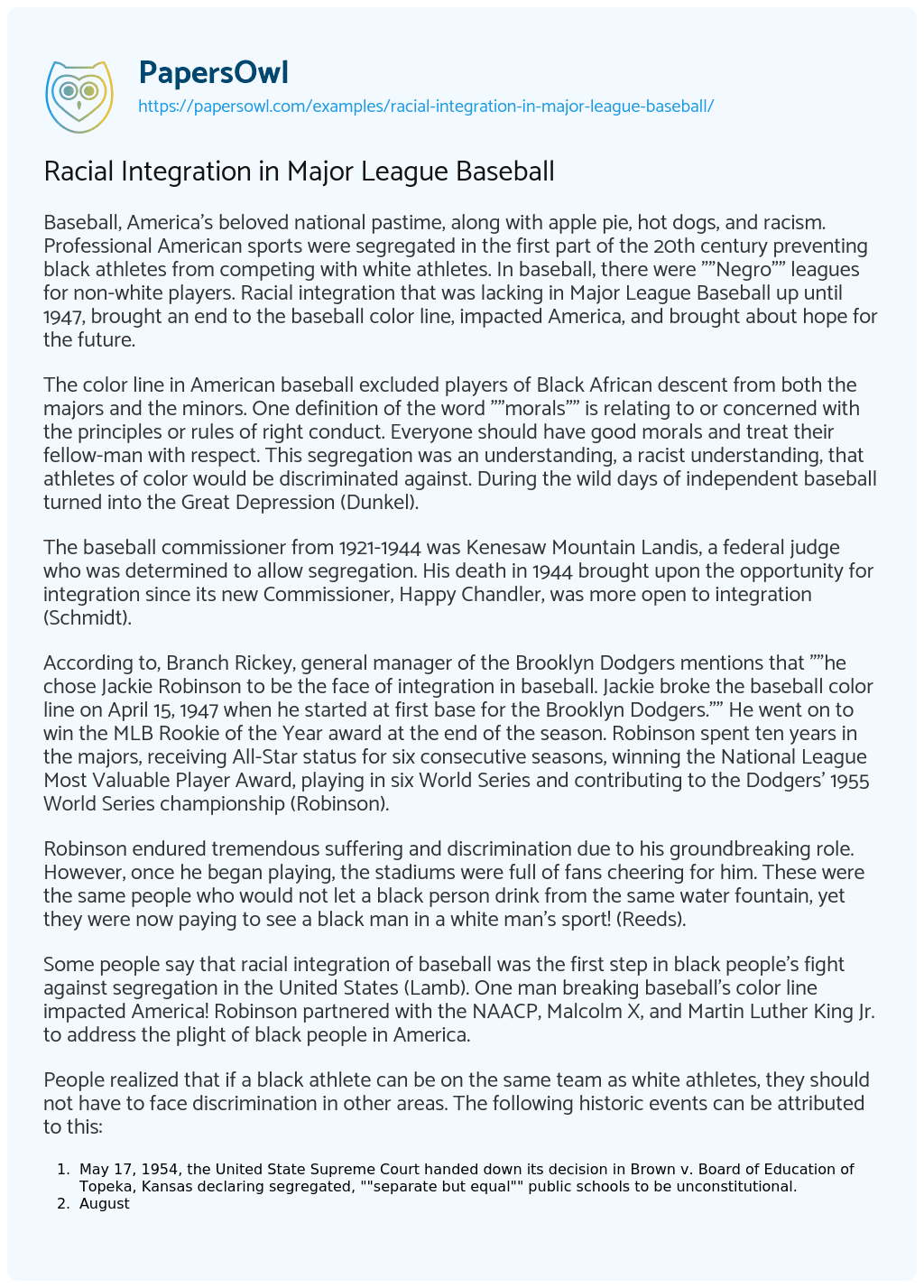 Baseball, America’s beloved national pastime, along with apple pie, hot dogs, and racism. Professional American sports were segregated in the first part of the 20th century preventing black athletes from competing with white athletes. In baseball, there were “”Negro”” leagues for non-white players. Racial integration that was lacking in Major League Baseball up until 1947, brought an end to the baseball color line, impacted America, and brought about hope for the future.

The color line in American baseball excluded players of Black African descent from both the majors and the minors. One definition of the word “”morals”” is relating to or concerned with the principles or rules of right conduct. Everyone should have good morals and treat their fellow-man with respect. This segregation was an understanding, a racist understanding, that athletes of color would be discriminated against. During the wild days of independent baseball turned into the Great Depression (Dunkel).

The baseball commissioner from 1921-1944 was Kenesaw Mountain Landis, a federal judge who was determined to allow segregation. His death in 1944 brought upon the opportunity for integration since its new Commissioner, Happy Chandler, was more open to integration (Schmidt).

According to, Branch Rickey, general manager of the Brooklyn Dodgers mentions that “”he chose Jackie Robinson to be the face of integration in baseball. Jackie broke the baseball color line on April 15, 1947 when he started at first base for the Brooklyn Dodgers.”” He went on to win the MLB Rookie of the Year award at the end of the season. Robinson spent ten years in the majors, receiving All-Star status for six consecutive seasons, winning the National League Most Valuable Player Award, playing in six World Series and contributing to the Dodgers’ 1955 World Series championship (Robinson).

Robinson endured tremendous suffering and discrimination due to his groundbreaking role. However, once he began playing, the stadiums were full of fans cheering for him. These were the same people who would not let a black person drink from the same water fountain, yet they were now paying to see a black man in a white man’s sport! (Reeds).

Some people say that racial integration of baseball was the first step in black people’s fight against segregation in the United States (Lamb). One man breaking baseball’s color line impacted America! Robinson partnered with the NAACP, Malcolm X, and Martin Luther King Jr. to address the plight of black people in America.

People realized that if a black athlete can be on the same team as white athletes, they should not have to face discrimination in other areas. The following historic events can be attributed to this:

Robinson’s success in breaking the color barrier gave hope to young African-Americans. African-American athletes could see a move closer to equality; they saw a possibility of being treated like white athletes. Within a decade of Robinson’s historic role, all but one major league team listed African-Americans on their rosters. African-American fans felt that Robinson’s achievement proved that race restrictions could be lifted. Robinson made equality seem attainable. His athletic and public poise gave him the support and admiration of white fans (Suggs).

After Robinson retired from baseball in 1957, he continued to play active roles in advocating for African-American equality (Nadel). According to, Thomas Donnell, Vice-President of Personnel with Chock-Full-O-Nuts, explains that when “”he became the first African-American senior executive of a major American brand in his role.”” He firmly believed that African-American involvement in business was central to the equality movement.

By being the person that broke racial segregation in MLB, Robinson was faced with obstacles. He had to agree not to respond to the abuse he would face. He endured much abuse by his teammates, fellow players, and fans. According to, John R. Austin says that Jackie Robinson “”could faced jeers and insults, hate mail, death threats, beanballs and spiking’s. Robinson remained silent the entire year.”” He had not spoken out against racism. He remained silent for another year (Austin). Finally, in 1949, Robinson and Rickey both agreed that it was time for Robinson to speak his mind and he broke his silence by becoming outspoken against racial discrimination. He became critical of the slow pace of racial integration. He urged baseball to use its economic power to desegregate Southern towns, hotels and ballparks. This came to be known as the “”Jackie Robinson experiment””, which provided an important example of successful desegregation to white southern political and business leaders. His statements angered many players, owners, and fans. Yet their anger did not affect his playing. That year he was voted the National League’s Most Valuable Player (History.com staff).

Robinson was a board member of the NAACP (National Association for the Advancement of Colored People), and he traveled across the country building morale among African Americans who were fighting for racial justice in their local communities. He helped lead civil rights campaigns in Albany, Georgia and Birmingham, Alabama (Johnston). When he was in Albay, he offered to raise enough money to rebuild several churches that had been burned to the ground. He founded Freedom National Bank in 1964 in Harlem. This was done in protest after a white financial institution had discriminated against African Americans having denied them loans. Robinson was very critical of white politicians, including Presidents Dwight Eisenhower, John Kennedy, and Richard Nixon for hesitating to advance civil rights legislation.

Jackie Robinson’s full impact on baseball and desegregation may never be fully determined. His life and career helped change the way Americans thought. He opened the doors for hundreds of great black athletes. Jackie Robinson was a pioneer in America’s pastime. He endured so much and was able to give back much. Two favorite quotes are: “”I’m not concerned with your liking or disliking me…. All I ask is that you respect me as a human being.”” and “”A Life is not important except in the impact it has on other lives.””

A League of their own Review – Feelgood Baseball Drama