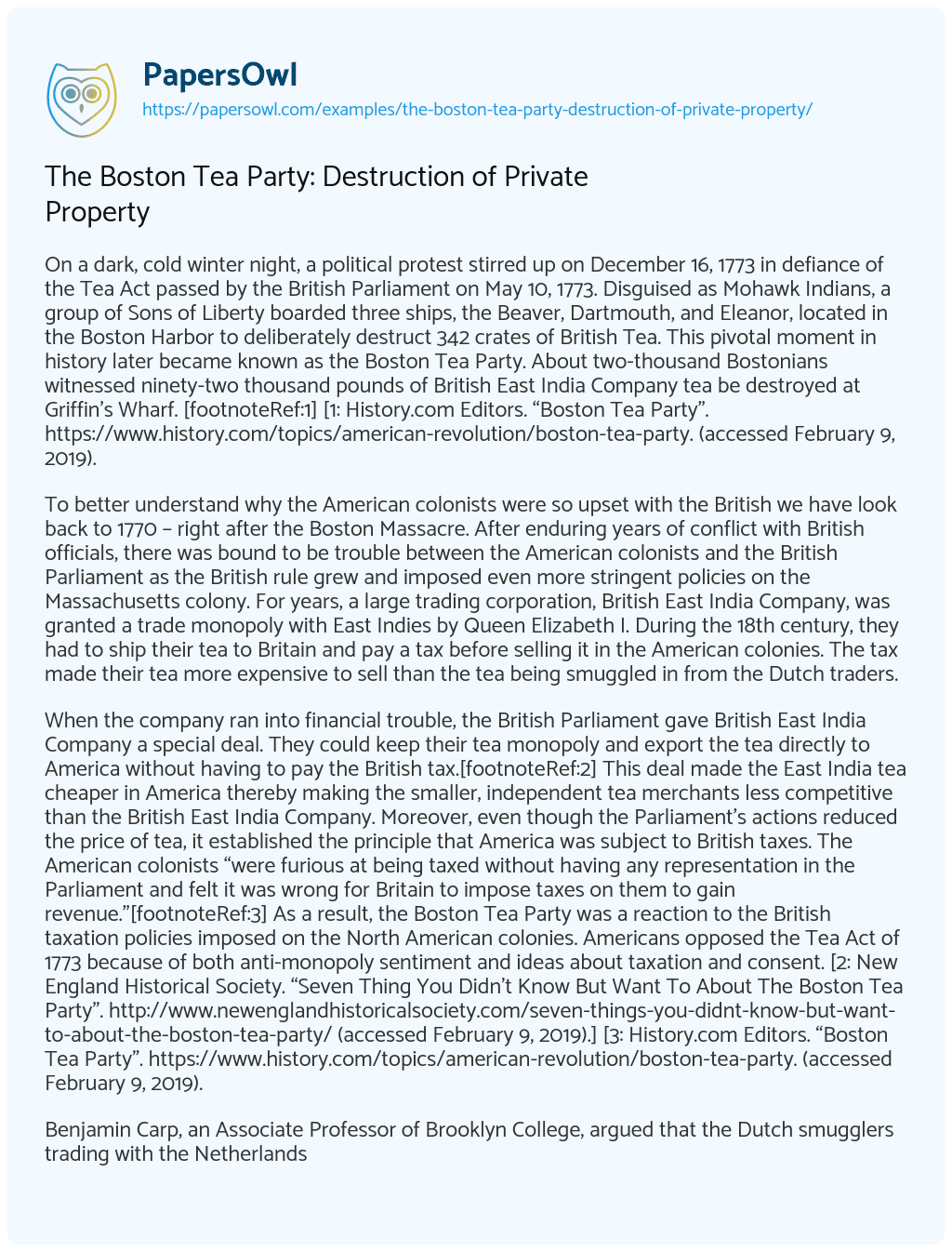 On a dark, cold winter night, a political protest stirred up on December 16, 1773 in defiance of the Tea Act passed by the British Parliament on May 10, 1773. Disguised as Mohawk Indians, a group of Sons of Liberty boarded three ships, the Beaver, Dartmouth, and Eleanor, located in the Boston Harbor to deliberately destruct 342 crates of British Tea. This pivotal moment in history later became known as the Boston Tea Party. About two-thousand Bostonians witnessed ninety-two thousand pounds of British East India Company tea be destroyed at Griffin’s Wharf. [footnoteRef:1] [1: History.com Editors. “Boston Tea Party”. https://www.history.com/topics/american-revolution/boston-tea-party. (accessed February 9, 2019).

To better understand why the American colonists were so upset with the British we have look back to 1770 – right after the Boston Massacre. After enduring years of conflict with British officials, there was bound to be trouble between the American colonists and the British Parliament as the British rule grew and imposed even more stringent policies on the Massachusetts colony. For years, a large trading corporation, British East India Company, was granted a trade monopoly with East Indies by Queen Elizabeth I. During the 18th century, they had to ship their tea to Britain and pay a tax before selling it in the American colonies. The tax made their tea more expensive to sell than the tea being smuggled in from the Dutch traders.

When the company ran into financial trouble, the British Parliament gave British East India Company a special deal. They could keep their tea monopoly and export the tea directly to America without having to pay the British tax.[footnoteRef:2] This deal made the East India tea cheaper in America thereby making the smaller, independent tea merchants less competitive than the British East India Company. Moreover, even though the Parliament’s actions reduced the price of tea, it established the principle that America was subject to British taxes. The American colonists “were furious at being taxed without having any representation in the Parliament and felt it was wrong for Britain to impose taxes on them to gain revenue.”[footnoteRef:3] As a result, the Boston Tea Party was a reaction to the British taxation policies imposed on the North American colonies. Americans opposed the Tea Act of 1773 because of both anti-monopoly sentiment and ideas about taxation and consent. [2: New England Historical Society. “Seven Thing You Didn’t Know But Want To About The Boston Tea Party”. http://www.newenglandhistoricalsociety.com/seven-things-you-didnt-know-but-want-to-about-the-boston-tea-party/ (accessed February 9, 2019).] [3: History.com Editors. “Boston Tea Party”. https://www.history.com/topics/american-revolution/boston-tea-party. (accessed February 9, 2019).

Benjamin Carp, an Associate Professor of Brooklyn College, argued that the Dutch smugglers trading with the Netherlands and other European nations helped provoke and create the conditions for the Boston Tea Party.[footnoteRef:4] He asks if smugglers and patriots were one and the same. Back in the sixteenth century, the Dutch, British, and British Americans helped build an interconnected Atlantic system that relied on slavery, staple crops, shipping, and commerce. Tea was a perfect article to smuggle through this network since it was lightweight, valuable, subject to heavy British duties and high in demand. Around the time of the Boston Tea Party, it is estimated that American colonists drank approximately 1.2 million pounds of tea each year. They began a lucrative industry of smuggling tea from the Dutch after the British started imposing taxes on the American colonists causing the British tea to be expensive. The smuggling of tea was undercutting the productive British tea trade, so the Parliament passed the Indemnity Act in 1767, which repealed the tea tax and made the British tea the same as the Dutch tea. Mr. Carp states that the Boston merchants violated the agreement by continuing to import British tea. These merchants resolved not to import British tea or other imported goods and the Sons of Liberty enforced them. Yet these enforcements did not prevent British tea from entering Boston. To earn short-term profits, Bostonians merchants got their tea from several sources: they bought legal tea, they smuggled Dutch tea, and they ran it overland from New York smugglers thus the argument that the Sons of Liberty and the smugglers created the conditions for the Boston Tea Party and helped provoke it. (Carp, 2012) [4: Carp, B. L. (2012). Did Dutch Smugglers Provoke The Boston Tea Party? Early American Studies, 10(2), 335-359.]

In Harlow Unger’s book, we are shown that outrage over the taxation of British tea was justified. While there were a number of other taxes and Acts the British Parliament imposed such as the Coercive Act (later known as the Intolerable Act) which shut down the Boston Harbor, the Tea Tax was the final straw.[footnoteRef:5] Instead of reforming their tax policies or accommodating the colonists’ demands, Britain’s legislative body imposed tighter controls over its North American colonies in order to raise revenues to help lift them out of debt. [5: Harlow G. Unger. American Tempest: How the Boston Tea Party Sparked a Revolution. (Cambridge, MA: Da Capo Press, 2011)

At the end of Unger’s book, there are a list of name of the reported Boston Tea Party participants. Bostonians feared the British Parliament would enact harsh punishments and force the colonists to pay for the destroyed tea. The founding publisher of The Boston Gazette and so-called “father of the Boston Tea Party”, Benjamin Edes, went to his grave without ever revealing who participated in the political and social revolution. The list was locked up in his desk drawer all his life until after his passing. His widow then gave it to Boston selectman, Benjamin Austin. [footnoteRef:6] [6: New England Historical Society. Seven Thing You Didn’t Know But Want To About The Boston Tea Party. http://www.newenglandhistoricalsociety.com/seven-things-you-didnt-know-but-want-to-about-the-boston-tea-party/ (accessed February 9, 2019).]

So in conclusion, were the Sons of Liberty and the smugglers being one and the same? The late eighteenth century marked a shift away from mercantilism moving towards free trade, but the give-and-take between government and commerce still mattered. The American patriots had good reason to worry that merchants might prove to friends or foe in the fight against Great Britain. These contradictions expose both the unintended consequences of the revolutionary movement and the difficulties of associating that movement exclusively with materialist concerns.

Greed: the Build up of the Boston Tea Party