The Awakening by Kate Chopin 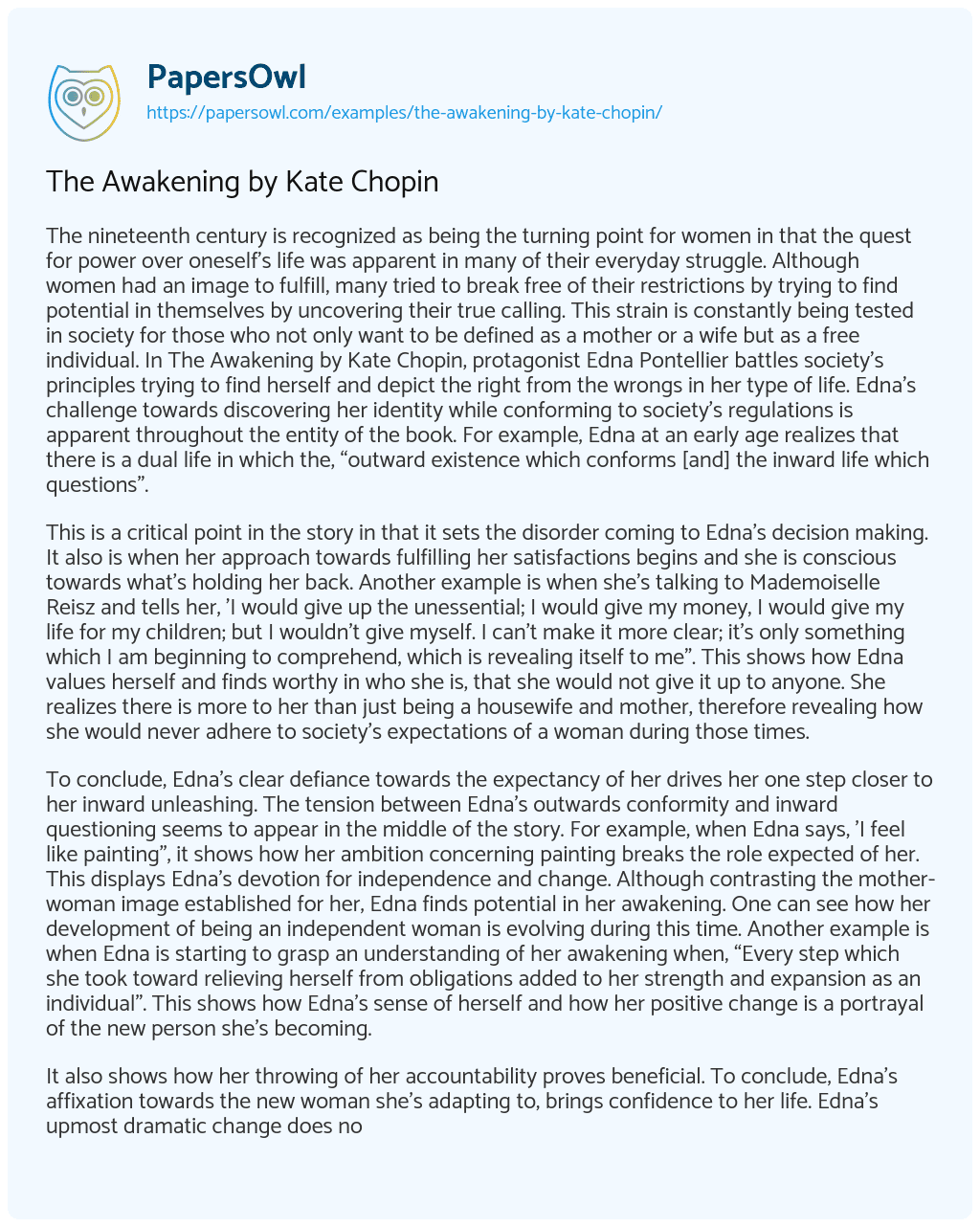 The nineteenth century is recognized as being the turning point for women in that the quest for power over oneself’s life was apparent in many of their everyday struggle. Although women had an image to fulfill, many tried to break free of their restrictions by trying to find potential in themselves by uncovering their true calling. This strain is constantly being tested in society for those who not only want to be defined as a mother or a wife but as a free individual. In The Awakening by Kate Chopin, protagonist Edna Pontellier battles society’s principles trying to find herself and depict the right from the wrongs in her type of life. Edna’s challenge towards discovering her identity while conforming to society’s regulations is apparent throughout the entity of the book. For example, Edna at an early age realizes that there is a dual life in which the, “outward existence which conforms [and] the inward life which questions”.

This is a critical point in the story in that it sets the disorder coming to Edna’s decision making. It also is when her approach towards fulfilling her satisfactions begins and she is conscious towards what’s holding her back. Another example is when she’s talking to Mademoiselle Reisz and tells her, ‘I would give up the unessential; I would give my money, I would give my life for my children; but I wouldn’t give myself. I can’t make it more clear; it’s only something which I am beginning to comprehend, which is revealing itself to me”. This shows how Edna values herself and finds worthy in who she is, that she would not give it up to anyone. She realizes there is more to her than just being a housewife and mother, therefore revealing how she would never adhere to society’s expectations of a woman during those times.

To conclude, Edna’s clear defiance towards the expectancy of her drives her one step closer to her inward unleashing. The tension between Edna’s outwards conformity and inward questioning seems to appear in the middle of the story. For example, when Edna says, ‘I feel like painting”, it shows how her ambition concerning painting breaks the role expected of her. This displays Edna’s devotion for independence and change. Although contrasting the mother-woman image established for her, Edna finds potential in her awakening. One can see how her development of being an independent woman is evolving during this time. Another example is when Edna is starting to grasp an understanding of her awakening when, “Every step which she took toward relieving herself from obligations added to her strength and expansion as an individual”. This shows how Edna’s sense of herself and how her positive change is a portrayal of the new person she’s becoming.

It also shows how her throwing of her accountability proves beneficial. To conclude, Edna’s affixation towards the new woman she’s adapting to, brings confidence to her life. Edna’s upmost dramatic change does not unfold all at one. For example, when Edna is talking to the doctor about what troubles her she says, “There are periods of despondency and suffering which take possession of me. But I don’t want anything but my own way.That is wanting a good deal, of course, when you have to trample upon the lives, the hearts, the prejudices of others–but no matter-still, I shouldn’t want to trample upon the little lives”. This shows how Edna does not want to hurt anyone, especially not her kids. However, her personal happiness means the world to her. This is important in that Edna could be seen as selfish for choosing herself over her children but instead she is securing her peace of mind for the future. Another example is when Edna returns to go swimming and thinks to herself, “How strange and awful it seemed to stand naked under the sky! How delicious! She felt like some new-born creature, opening its eyes in a familiar world that it had never known”.

This is a time in the book where there is a clear and most obvious reflections of Edna’s awakening. Edna no longer feels refrained from conforming to society’s expectations because she has now experienced true love and freedom. To conclude, Edna reached the highest satisfaction she could have, considering the time and place she was in. In conclusion, Edna’s struggle in The Awakening with having to live up to society’s expectations for being a woman, having to be a mother and a wife, caused turmoil in Edna’s life. However, the desire to be able to do as she pleased proved inevitable in that she was able to pursue her life when she brought up paining, falling in love and gaining independence. One can see how Edna was able to gain security in her decision making although being very difficult for women during her time.

The Awakening by Kate Chopin. (2022, Jun 26). Retrieved from https://papersowl.com/examples/the-awakening-by-kate-chopin/