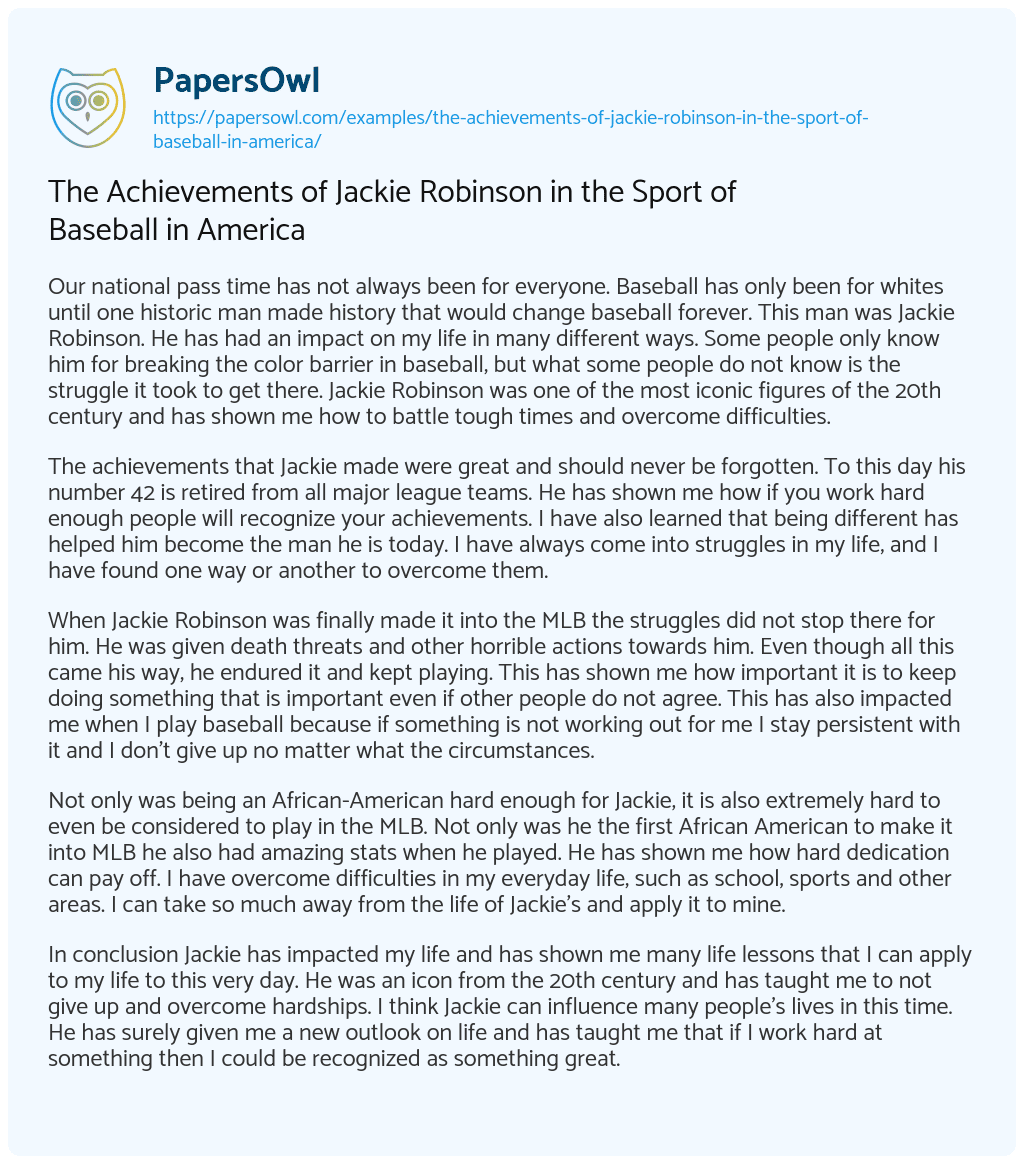 Our national pass time has not always been for everyone. Baseball has only been for whites until one historic man made history that would change baseball forever. This man was Jackie Robinson. He has had an impact on my life in many different ways. Some people only know him for breaking the color barrier in baseball, but what some people do not know is the struggle it took to get there. Jackie Robinson was one of the most iconic figures of the 20th century and has shown me how to battle tough times and overcome difficulties.

The achievements that Jackie made were great and should never be forgotten. To this day his number 42 is retired from all major league teams. He has shown me how if you work hard enough people will recognize your achievements. I have also learned that being different has helped him become the man he is today. I have always come into struggles in my life, and I have found one way or another to overcome them.

When Jackie Robinson was finally made it into the MLB the struggles did not stop there for him. He was given death threats and other horrible actions towards him. Even though all this came his way, he endured it and kept playing. This has shown me how important it is to keep doing something that is important even if other people do not agree. This has also impacted me when I play baseball because if something is not working out for me I stay persistent with it and I don’t give up no matter what the circumstances.

Not only was being an African-American hard enough for Jackie, it is also extremely hard to even be considered to play in the MLB. Not only was he the first African American to make it into MLB he also had amazing stats when he played. He has shown me how hard dedication can pay off. I have overcome difficulties in my everyday life, such as school, sports and other areas. I can take so much away from the life of Jackie’s and apply it to mine.

In conclusion Jackie has impacted my life and has shown me many life lessons that I can apply to my life to this very day. He was an icon from the 20th century and has taught me to not give up and overcome hardships. I think Jackie can influence many people’s lives in this time. He has surely given me a new outlook on life and has taught me that if I work hard at something then I could be recognized as something great.

The Achievements of Jackie Robinson in the Sport of Baseball in America. (2022, Nov 23). Retrieved from https://papersowl.com/examples/the-achievements-of-jackie-robinson-in-the-sport-of-baseball-in-america/