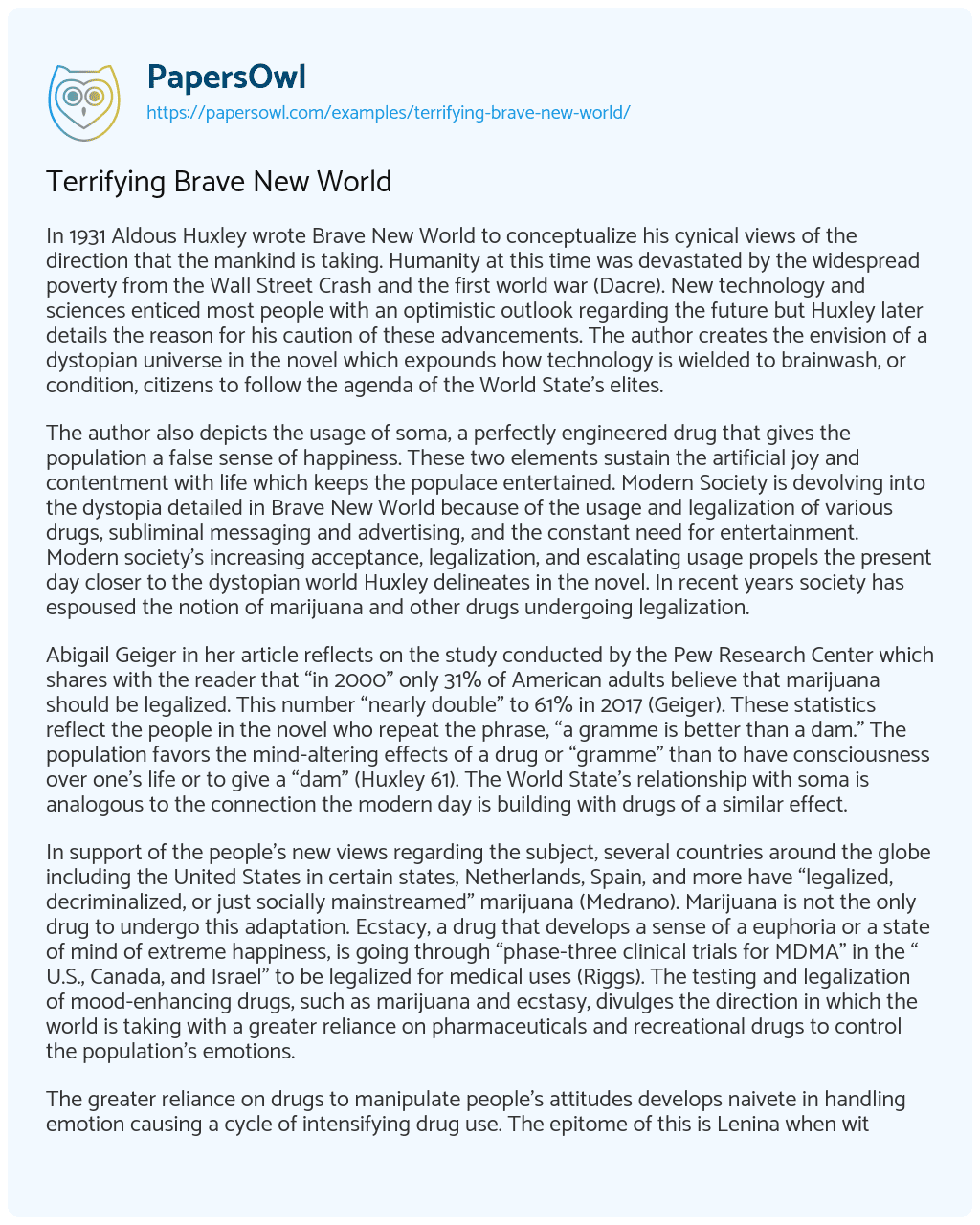 In 1931 Aldous Huxley wrote Brave New World to conceptualize his cynical views of the direction that the mankind is taking. Humanity at this time was devastated by the widespread poverty from the Wall Street Crash and the first world war (Dacre). New technology and sciences enticed most people with an optimistic outlook regarding the future but Huxley later details the reason for his caution of these advancements. The author creates the envision of a dystopian universe in the novel which expounds how technology is wielded to brainwash, or condition, citizens to follow the agenda of the World State’s elites.

The author also depicts the usage of soma, a perfectly engineered drug that gives the population a false sense of happiness. These two elements sustain the artificial joy and contentment with life which keeps the populace entertained. Modern Society is devolving into the dystopia detailed in Brave New World because of the usage and legalization of various drugs, subliminal messaging and advertising, and the constant need for entertainment. Modern society’s increasing acceptance, legalization, and escalating usage propels the present day closer to the dystopian world Huxley delineates in the novel. In recent years society has espoused the notion of marijuana and other drugs undergoing legalization.

Abigail Geiger in her article reflects on the study conducted by the Pew Research Center which shares with the reader that “in 2000” only 31% of American adults believe that marijuana should be legalized. This number “nearly double” to 61% in 2017 (Geiger). These statistics reflect the people in the novel who repeat the phrase, “a gramme is better than a dam.” The population favors the mind-altering effects of a drug or “gramme” than to have consciousness over one’s life or to give a “dam” (Huxley 61). The World State’s relationship with soma is analogous to the connection the modern day is building with drugs of a similar effect.

In support of the people’s new views regarding the subject, several countries around the globe including the United States in certain states, Netherlands, Spain, and more have “legalized, decriminalized, or just socially mainstreamed” marijuana (Medrano). Marijuana is not the only drug to undergo this adaptation. Ecstacy, a drug that develops a sense of a euphoria or a state of mind of extreme happiness, is going through “phase-three clinical trials for MDMA” in the “ U.S., Canada, and Israel” to be legalized for medical uses (Riggs). The testing and legalization of mood-enhancing drugs, such as marijuana and ecstasy, divulges the direction in which the world is taking with a greater reliance on pharmaceuticals and recreational drugs to control the population’s emotions.

The greater reliance on drugs to manipulate people’s attitudes develops naivete in handling emotion causing a cycle of intensifying drug use. The epitome of this is Lenina when witnessing the savages’ ritual and whipping. After “Lenina was still sobbing” she cried out “Oh, I wish I had my soma” (Huxley 110). Lenina was feeling a great sense of emotion which she was unable to control but instead of learning to control these volatile thoughts she immediately tries to turn to her “soma” to perish her anguish.

This dilemma illustrated in Brave New World is quite congruent to the reality of the contemporary era. In the United States, “one in six Americans take some kind of psychiatric drugs — mostly antidepressants” (Fox). Due to the rise in accessibility to drugs and as pharmaceuticals become socially normal, people look for the easy way to control their emotions. This unknowingly prompts the user to give up their humanity and self-governance to a drug. Ultimately the social acceptance, legalization, and the increased consumption of drugs results in individuals losing control over themselves and to lack the ability to give a “dam.”

Throughout the course of the Brave New World, the idea exemplified by the author that someone can be conditioned or put under hypnopaedia to adjust their thoughts and beliefs is not far-fetched from our own reality with modern day subliminal messaging and advertising. Mustapha Mond makes the claim, “as if one believed anything by instinct! One believes things because one has been conditioned to believe them” (Huxley 210).

When presented with the Savage’s idea of people acting off of instinct the controller reacts with the sarcasm of “as if one believed anything by instinct.” This exposes how influential conditioning is on the mind and that it has completely reworked the brain’s thought process by replacing instinct with implanted thoughts. Likewise in the present world, corporations use advertising and other forms of subliminal messaging to manipulate the actions of the population. Mlodinow in his book discusses how “certain events of which we have not consciously taken note,” such as seeing an advertisement with a catchy song, will impact the viewer’s decisions. This is because the message from the advertisement “has been absorbed subliminally” (24). An example of subliminal messaging in the world is in Lord of the Rings movie.

On the ring, instead of having writings of an ancient language, it has printed “coca cola” (“Examples with Subliminal Messages”). Even if the audience doesn’t notice the presence of the Coca Cola logo it is still subliminally entered the mind. When the audience walks out of the theatre there will also be advertisements for Coca Cola bolstering the power of the corporation’s subliminal message. When further elaborating on subliminal messaging, Mlodinow discusses how exponentially easier it is for companies to sell a product or service when the idea of what their company is offering has subliminally inserted into the mind of the possible customer.

Similarly to how the conditioning centers in Brave New World inculcate thoughts following the motives of the World State’s elites into the masses, marketing aims to train the masses, via advertising, to believe as instructed by the corporations. Comparably to corporations beginning to modify individual’s train of thought via subliminal messaging and advertisement, in the novel with conditioning entirely replacing mankind’s instinctive qualities. Thus pushing the modern day closer to become the dystopia the author has depicted. The incessant need for entertainment in the present day is homogeneous to the motif of the mandate for unceasing happiness that plagues the masses of the World State. Copious groups of people, especially millennials and generation z, who have grown up with instant gratification and information that came along with technology have become addicted to entertainment. Anderson, when addressing how the population has become reliant on entertainment and technology, claims “it’s not a drug, but it might as well be.” By saying “but it might as well be” Anderson is symbolizing the contemporary day dependancy to entertainment, wither it be Netflix, social media, or video games, to an addiction to drugs. She further elaborates “that the brain responds” by over releasing “dopamine” which is extremely similar to how “it responds to other addictive substances” (Anderson).

The overstimulation of entertainment leaves the user disappointed and unfulfilled in life causing depression and anxiety, ultimately building a reliance on technology to falsely entertaining them. This further deprives the user of their free will. Anderson’s figurative use of drugs for the comparison of entertainment to an addiction is used literally by Huxley in his dystopian world. He interprets the dehumanization in his novel as the “substance of their distractions” or as “delicious soma” (62).

The elites of the World State strip the citizen of their humanity by redirecting their attention from the reality of the life to soma, taking away an individual’s independence and free will. The correlation between the obsession with entertainment and soma resulted from the seeking of true happiness but in both realities fail due to the addictive qualities that end up enslaving the users. While the world in the 1930’s remained hopeful for what the future held, Huxley kept a skeptical perspective gaging how next evolution of technology would impact the planet. The author predicts that the masses would sabotage their own right to self-sovereignty by giving up their emotions to the medications like soma.

Brave New World forecasts the altercation of people’s opinions, beliefs, and thoughts from advertisements and subliminal messaging in the form of the conditioning centers. The repercussions of the dependency on entertainment brought with modern technology cause for the subjugation of the user to a cycle of addiction due to the lack of fulfillment life. The contemporary time period is falling into the dystopian universe outlined in Huxley’s work because of the rise in popularity of drug use, subliminal messaging and advertising, and the need for sustained entertainment.