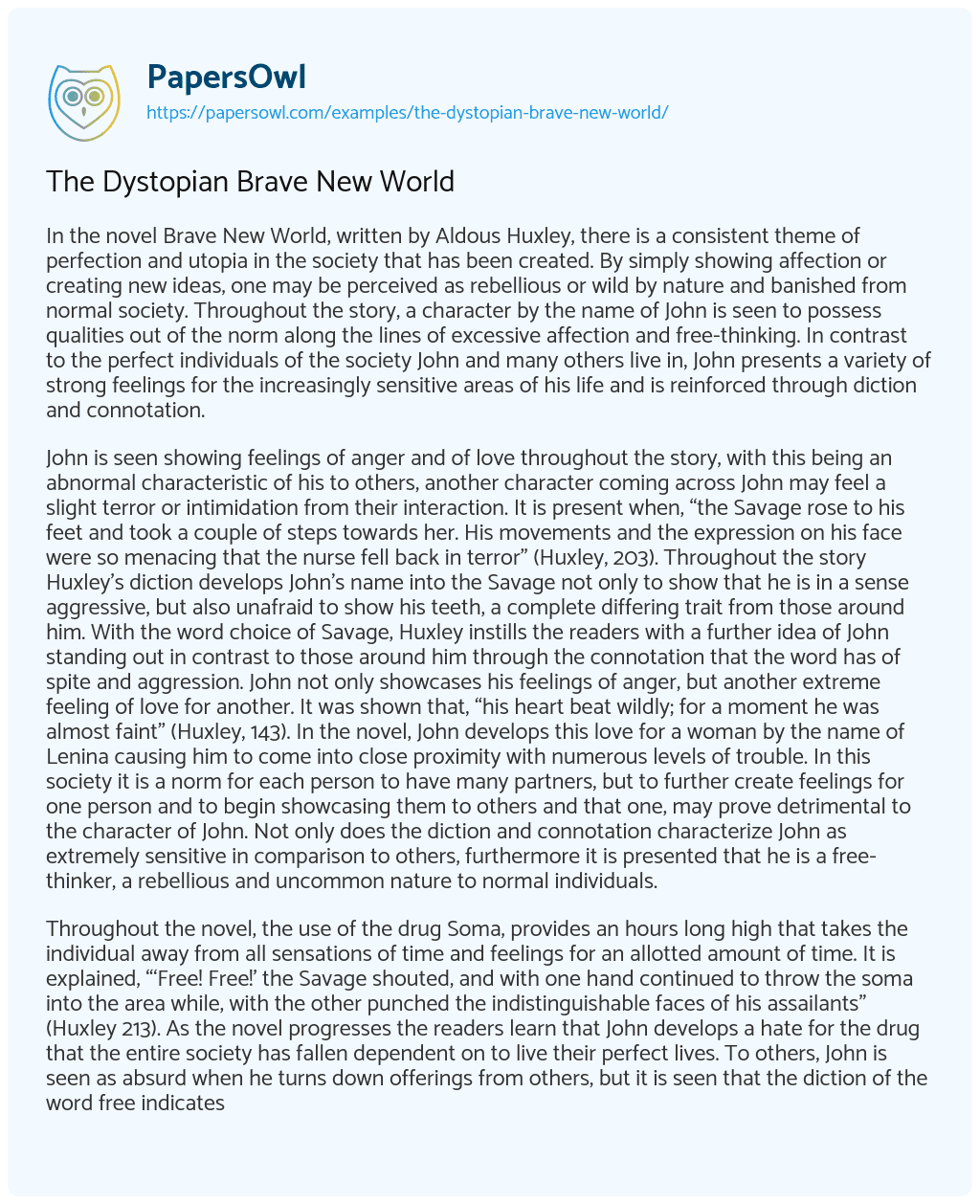 In the novel Brave New World, written by Aldous Huxley, there is a consistent theme of perfection and utopia in the society that has been created. By simply showing affection or creating new ideas, one may be perceived as rebellious or wild by nature and banished from normal society. Throughout the story, a character by the name of John is seen to possess qualities out of the norm along the lines of excessive affection and free-thinking. In contrast to the perfect individuals of the society John and many others live in, John presents a variety of strong feelings for the increasingly sensitive areas of his life and is reinforced through diction and connotation.

John is seen showing feelings of anger and of love throughout the story, with this being an abnormal characteristic of his to others, another character coming across John may feel a slight terror or intimidation from their interaction. It is present when, “the Savage rose to his feet and took a couple of steps towards her. His movements and the expression on his face were so menacing that the nurse fell back in terror” (Huxley, 203). Throughout the story Huxley’s diction develops John’s name into the Savage not only to show that he is in a sense aggressive, but also unafraid to show his teeth, a complete differing trait from those around him. With the word choice of Savage, Huxley instills the readers with a further idea of John standing out in contrast to those around him through the connotation that the word has of spite and aggression. John not only showcases his feelings of anger, but another extreme feeling of love for another. It was shown that, “his heart beat wildly; for a moment he was almost faint” (Huxley, 143). In the novel, John develops this love for a woman by the name of Lenina causing him to come into close proximity with numerous levels of trouble. In this society it is a norm for each person to have many partners, but to further create feelings for one person and to begin showcasing them to others and that one, may prove detrimental to the character of John. Not only does the diction and connotation characterize John as extremely sensitive in comparison to others, furthermore it is presented that he is a free-thinker, a rebellious and uncommon nature to normal individuals.

Throughout the novel, the use of the drug Soma, provides an hours long high that takes the individual away from all sensations of time and feelings for an allotted amount of time. It is explained, “‘Free! Free!’ the Savage shouted, and with one hand continued to throw the soma into the area while, with the other punched the indistinguishable faces of his assailants” (Huxley 213). As the novel progresses the readers learn that John develops a hate for the drug that the entire society has fallen dependent on to live their perfect lives. To others, John is seen as absurd when he turns down offerings from others, but it is seen that the diction of the word free indicates that John sees people as enslaved to the drug. Not only to others is John seen as obscure, but furthermore to himself a sense of not belonging or not of worth to belong with others. This can be seen when, “ashamed of his desire… he was not worthy” (Huxley 169). In the numerous ways that people of this society interact, John deems himself as unworthy of the activities. Engaging in extreme sexual relations or profane drug use is not only unappealing but undeserving of John as a result of the way he is perceived by both others and himself.

Throughout the novel, John can be best described as the odd-man-out as a result of being a rebellious and emotional character type. Huxley presents the audience with the concept that in the midst of this utopia, there is that one exception that can throw the entirety of society for a whim as mentioned through the story as worthy of being banished or excluded. John’s character gives the readers a feeling of relation and involvement in a story rooted in the idea of perfection.