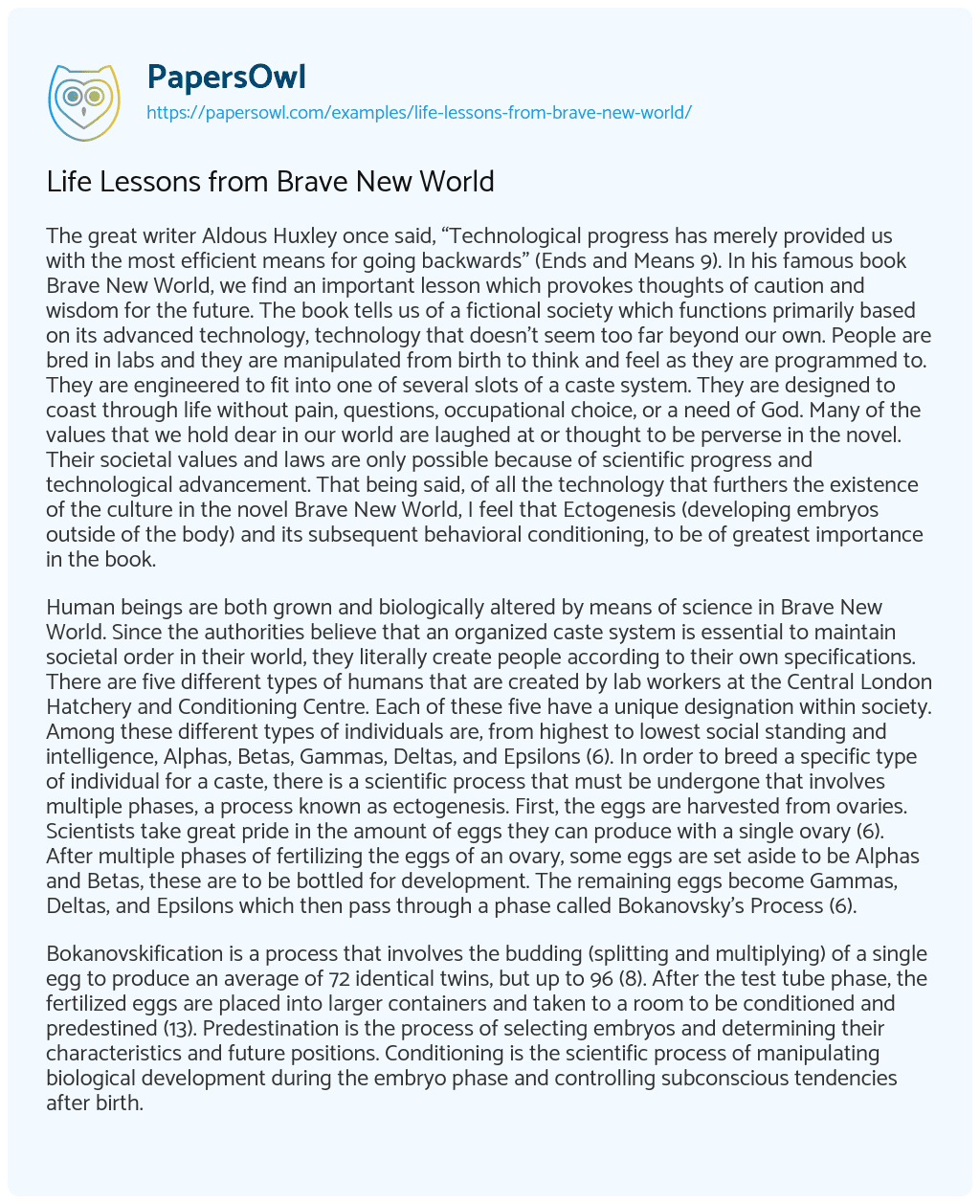 The great writer Aldous Huxley once said, “Technological progress has merely provided us with the most efficient means for going backwards” (Ends and Means 9). In his famous book Brave New World, we find an important lesson which provokes thoughts of caution and wisdom for the future. The book tells us of a fictional society which functions primarily based on its advanced technology, technology that doesn’t seem too far beyond our own. People are bred in labs and they are manipulated from birth to think and feel as they are programmed to. They are engineered to fit into one of several slots of a caste system. They are designed to coast through life without pain, questions, occupational choice, or a need of God. Many of the values that we hold dear in our world are laughed at or thought to be perverse in the novel. Their societal values and laws are only possible because of scientific progress and technological advancement. That being said, of all the technology that furthers the existence of the culture in the novel Brave New World, I feel that Ectogenesis (developing embryos outside of the body) and its subsequent behavioral conditioning, to be of greatest importance in the book.

Human beings are both grown and biologically altered by means of science in Brave New World. Since the authorities believe that an organized caste system is essential to maintain societal order in their world, they literally create people according to their own specifications. There are five different types of humans that are created by lab workers at the Central London Hatchery and Conditioning Centre. Each of these five have a unique designation within society. Among these different types of individuals are, from highest to lowest social standing and intelligence, Alphas, Betas, Gammas, Deltas, and Epsilons (6). In order to breed a specific type of individual for a caste, there is a scientific process that must be undergone that involves multiple phases, a process known as ectogenesis. First, the eggs are harvested from ovaries. Scientists take great pride in the amount of eggs they can produce with a single ovary (6). After multiple phases of fertilizing the eggs of an ovary, some eggs are set aside to be Alphas and Betas, these are to be bottled for development. The remaining eggs become Gammas, Deltas, and Epsilons which then pass through a phase called Bokanovsky’s Process (6).

Bokanovskification is a process that involves the budding (splitting and multiplying) of a single egg to produce an average of 72 identical twins, but up to 96 (8). After the test tube phase, the fertilized eggs are placed into larger containers and taken to a room to be conditioned and predestined (13). Predestination is the process of selecting embryos and determining their characteristics and future positions. Conditioning is the scientific process of manipulating biological development during the embryo phase and controlling subconscious tendencies after birth. For example, some embryos are given less oxygen, so they develop into subpar humans (14) while others are kept in constant rotation “to improve their sense of balance” (17). In essence, certain eggs are manipulated to develop according to the will of the scientist.

After fetuses are born, they are subjected to further conditioning. As babies, preferences are programmed into the subconscious mind. In one account we read about a group of 8-month-old Deltas being brought into a room with lots of roses and books to play with. In the middle of their play time, the nurse commences a conditioning sequence in which a lever is pulled to initiate an explosively loud noise that keeps progressing in amplitude until each baby in in terror. Later the nurse begins another sequence which electrifies the floor upon which the babies are playing. Their pain and horror reach a climax and the exercise is done (21). This is the conditioning they use to help Deltas develop a subconscious distaste for the books and flowers they played with. It isn’t their role to enjoy learning from books or to appreciate the beauties of nature, so they shock the desires away.

One of the reasons that these technologies exist in Brave New World is to maintain full control over all the outcomes and to make everyone fit perfectly into their role and like it. The Director of Hatcheries and Conditioning stated, “All conditioning aims at that: making people like their unescapable social destiny” (16). Because of ectogenesis and subconscious conditioning, the intelligence and desire of each individual correlates with his caste and his work. A commonality between many dystopian novels is the removal of the will and the suppression of choice. With this technology that becomes possible even before a person’s birth. This novel shows us in a very clear way how technology can be a means of societal digression and a danger to freedom if it isn’t kept in check.