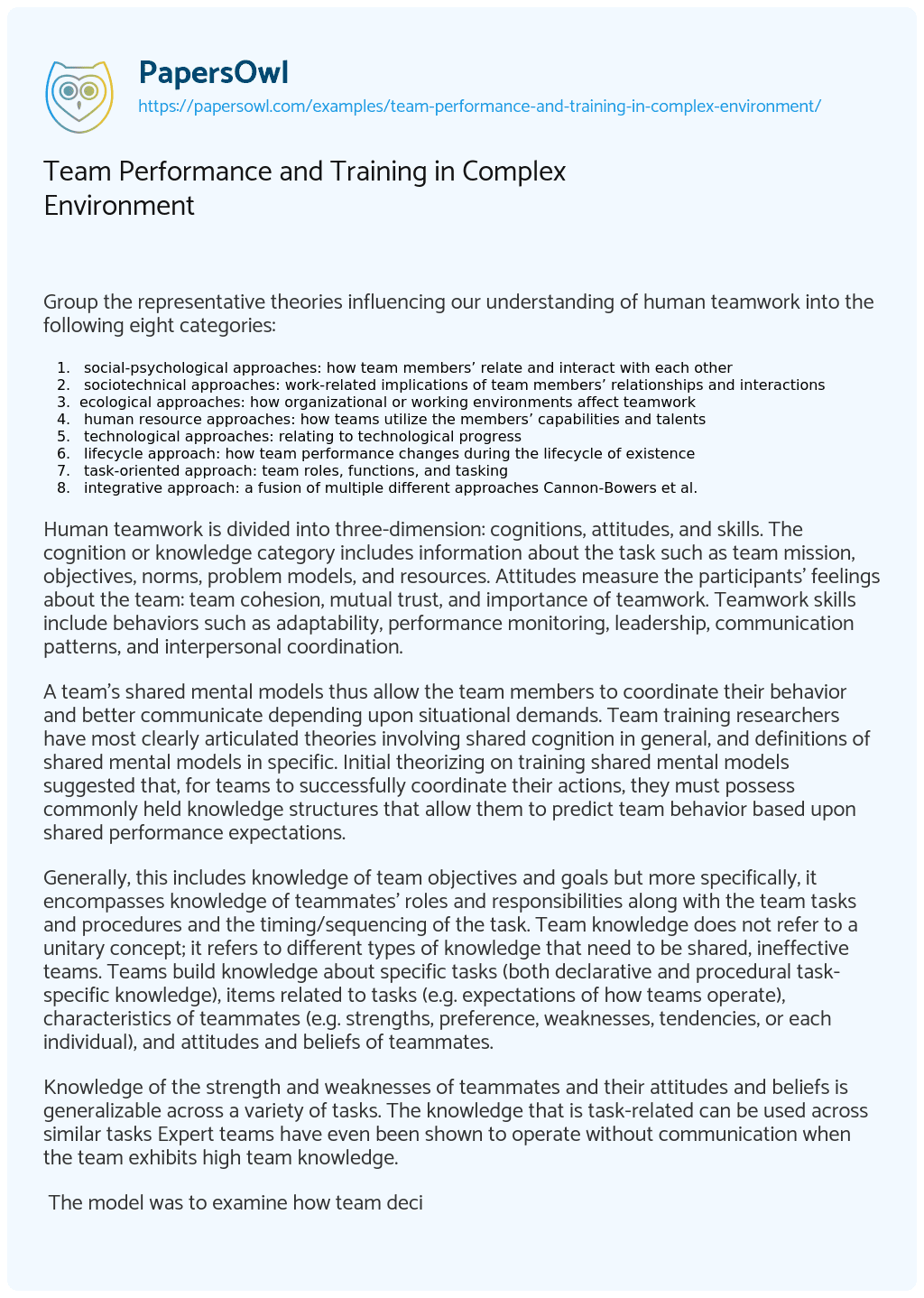 Group the representative theories influencing our understanding of human teamwork into the following eight categories:

Human teamwork is divided into three-dimension: cognitions, attitudes, and skills. The cognition or knowledge category includes information about the task such as team mission, objectives, norms, problem models, and resources. Attitudes measure the participants’ feelings about the team: team cohesion, mutual trust, and importance of teamwork. Teamwork skills include behaviors such as adaptability, performance monitoring, leadership, communication patterns, and interpersonal coordination.

Generally, this includes knowledge of team objectives and goals but more specifically, it encompasses knowledge of teammates’ roles and responsibilities along with the team tasks and procedures and the timing/sequencing of the task. Team knowledge does not refer to a unitary concept; it refers to different types of knowledge that need to be shared, ineffective teams. Teams build knowledge about specific tasks (both declarative and procedural task-specific knowledge), items related to tasks (e.g. expectations of how teams operate), characteristics of teammates (e.g. strengths, preference, weaknesses, tendencies, or each individual), and attitudes and beliefs of teammates.

Knowledge of the strength and weaknesses of teammates and their attitudes and beliefs is generalizable across a variety of tasks. The knowledge that is task-related can be used across similar tasks Expert teams have even been shown to operate without communication when the team exhibits high team knowledge.

The model was to examine how team decision-making and coordination strategies adapt to increased workload and resource scarcity under different responsibility structures (Kleinman et al., 1992). Specifically, this model explores a team of 3 decision-makers who must respond to new tasks that must be completed by one of the team members. However, the team has fixed resources and each team member can only address one task at a time. As such, to be maximally effective, the team must share the load. First, a normative model was created.

For the experiment, three decision-makers sat at workstations and were presented with randomly arriving tasks that required processing by one of the team members. Several variables were manipulated, including functional overlap, resource scarcity, and arrival rate of tasks. The normative model matched the performance of human teams relatively well, in terms of final strength and slack time performance; however, their strategies showed differences. Several biases were identified as being responsible for the discrepancies (e.g., a reluctance to project the effects of a decision into the future). Based on the experimental data, the model was then revised.

The majority of conceptual models accessed for this review are normative models of team performance. An influential normative model was proposed by Cannon-Bowers, Tannenbaum, Salas, and Volpe (1995).

The major advantage of this model is that it emphasizes the importance of environmental factors. Most of the past models of team performance did not consider environmental factors as contributing to team performance. This past omission was problematic, as most teams do not operate within a vacuum. On the other hand, this model also seems to under-emphasize the potential power of team processes. Teamwork skills, such as communication and coordination are highly researched areas in the team literature, and are clearly very influential factors to the overall functioning and ultimate success of a team.

How Creat a Successful Team?

The Stages of Team Formation

What is Teamwork and Team?

Identify the Critical Issue (s) in the Case