Symbolism in the Glass Menagerie by Tennesse Williams 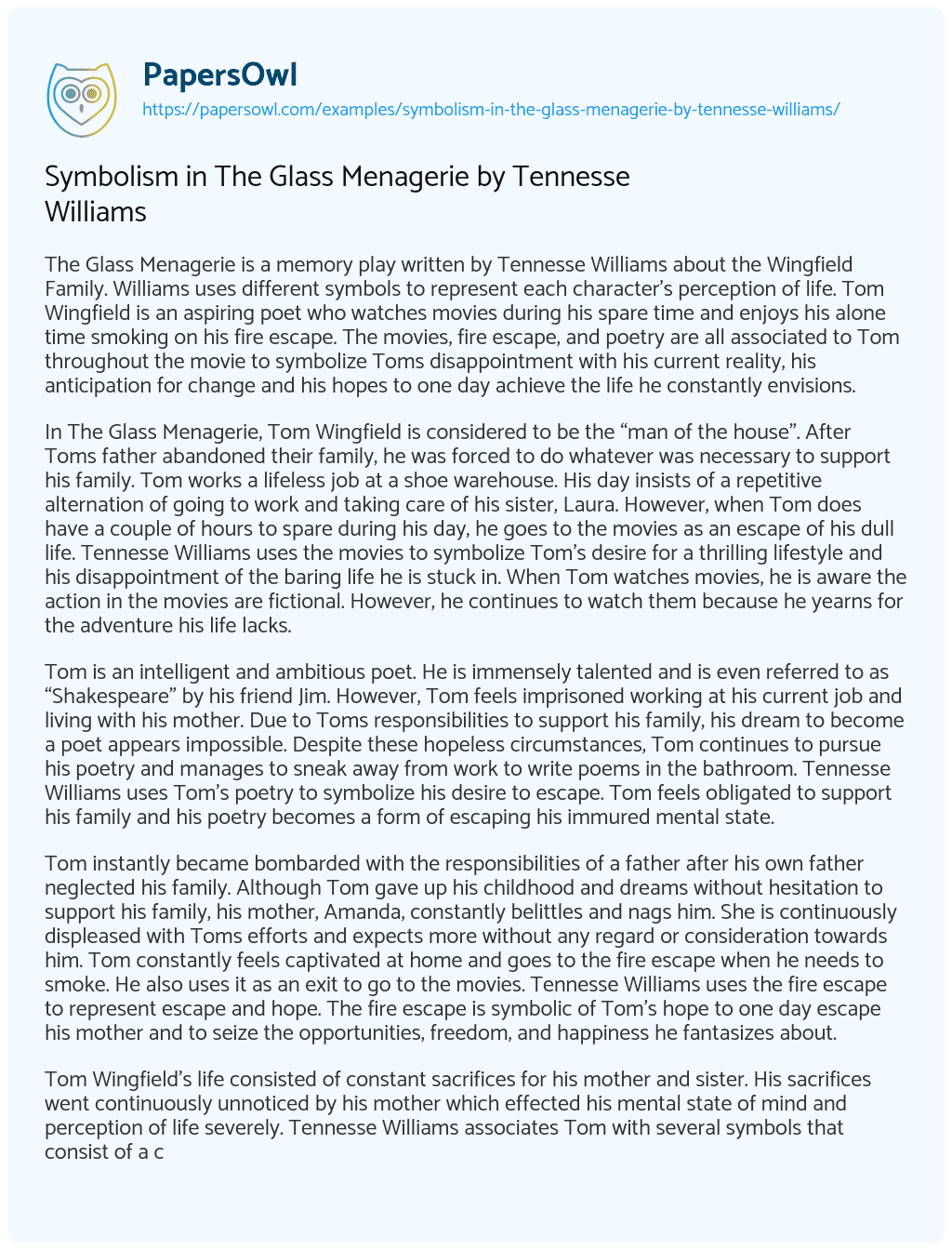 The Glass Menagerie is a memory play written by Tennesse Williams about the Wingfield Family. Williams uses different symbols to represent each character’s perception of life. Tom Wingfield is an aspiring poet who watches movies during his spare time and enjoys his alone time smoking on his fire escape. The movies, fire escape, and poetry are all associated to Tom throughout the movie to symbolize Toms disappointment with his current reality, his anticipation for change and his hopes to one day achieve the life he constantly envisions.

In The Glass Menagerie, Tom Wingfield is considered to be the “man of the house”. After Toms father abandoned their family, he was forced to do whatever was necessary to support his family. Tom works a lifeless job at a shoe warehouse. His day insists of a repetitive alternation of going to work and taking care of his sister, Laura. However, when Tom does have a couple of hours to spare during his day, he goes to the movies as an escape of his dull life. Tennesse Williams uses the movies to symbolize Tom’s desire for a thrilling lifestyle and his disappointment of the baring life he is stuck in. When Tom watches movies, he is aware the action in the movies are fictional. However, he continues to watch them because he yearns for the adventure his life lacks.

Tom is an intelligent and ambitious poet. He is immensely talented and is even referred to as “Shakespeare” by his friend Jim. However, Tom feels imprisoned working at his current job and living with his mother. Due to Toms responsibilities to support his family, his dream to become a poet appears impossible. Despite these hopeless circumstances, Tom continues to pursue his poetry and manages to sneak away from work to write poems in the bathroom. Tennesse Williams uses Tom’s poetry to symbolize his desire to escape. Tom feels obligated to support his family and his poetry becomes a form of escaping his immured mental state.

Tom instantly became bombarded with the responsibilities of a father after his own father neglected his family. Although Tom gave up his childhood and dreams without hesitation to support his family, his mother, Amanda, constantly belittles and nags him. She is continuously displeased with Toms efforts and expects more without any regard or consideration towards him. Tom constantly feels captivated at home and goes to the fire escape when he needs to smoke. He also uses it as an exit to go to the movies. Tennesse Williams uses the fire escape to represent escape and hope. The fire escape is symbolic of Tom’s hope to one day escape his mother and to seize the opportunities, freedom, and happiness he fantasizes about.

Tom Wingfield’s life consisted of constant sacrifices for his mother and sister. His sacrifices went continuously unnoticed by his mother which effected his mental state of mind and perception of life severely. Tennesse Williams associates Tom with several symbols that consist of a common theme of disappointment and hope. These symbols include the movies, poetry, and the fire escape. Tom fantasizes to have a life filled with adventure, poetry, and freedom but finds this hard obtain due to his family’s dysfunctional, frustrating reality resulting in his constant dissatisfaction and hope for change.

Symbolism in The Glass Menagerie by Tennesse Williams. (2021, Mar 26). Retrieved from https://papersowl.com/examples/symbolism-in-the-glass-menagerie-by-tennesse-williams/

The Glass Menagerie: the Reality of Illusion Using Symbolism