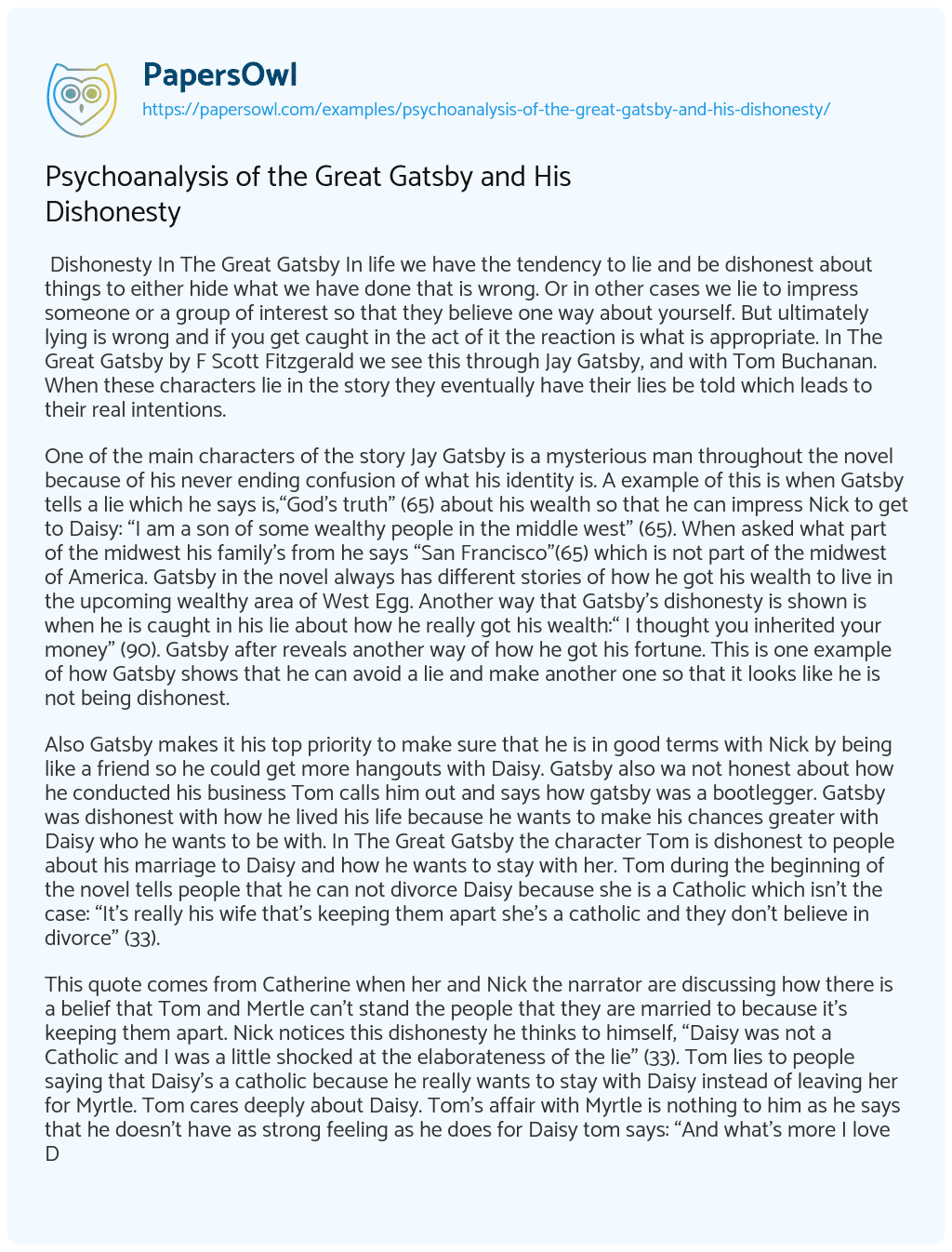 Dishonesty In The Great Gatsby In life we have the tendency to lie and be dishonest about things to either hide what we have done that is wrong. Or in other cases we lie to impress someone or a group of interest so that they believe one way about yourself. But ultimately lying is wrong and if you get caught in the act of it the reaction is what is appropriate. In The Great Gatsby by F Scott Fitzgerald we see this through Jay Gatsby, and with Tom Buchanan. When these characters lie in the story they eventually have their lies be told which leads to their real intentions.

One of the main characters of the story Jay Gatsby is a mysterious man throughout the novel because of his never ending confusion of what his identity is. A example of this is when Gatsby tells a lie which he says is,“God’s truth” (65) about his wealth so that he can impress Nick to get to Daisy: “I am a son of some wealthy people in the middle west” (65). When asked what part of the midwest his family’s from he says “San Francisco”(65) which is not part of the midwest of America. Gatsby in the novel always has different stories of how he got his wealth to live in the upcoming wealthy area of West Egg. Another way that Gatsby’s dishonesty is shown is when he is caught in his lie about how he really got his wealth:“ I thought you inherited your money” (90). Gatsby after reveals another way of how he got his fortune. This is one example of how Gatsby shows that he can avoid a lie and make another one so that it looks like he is not being dishonest.

Also Gatsby makes it his top priority to make sure that he is in good terms with Nick by being like a friend so he could get more hangouts with Daisy. Gatsby also wa not honest about how he conducted his business Tom calls him out and says how gatsby was a bootlegger. Gatsby was dishonest with how he lived his life because he wants to make his chances greater with Daisy who he wants to be with. In The Great Gatsby the character Tom is dishonest to people about his marriage to Daisy and how he wants to stay with her. Tom during the beginning of the novel tells people that he can not divorce Daisy because she is a Catholic which isn’t the case: “It’s really his wife that’s keeping them apart she’s a catholic and they don’t believe in divorce” (33).

This quote comes from Catherine when her and Nick the narrator are discussing how there is a belief that Tom and Mertle can’t stand the people that they are married to because it’s keeping them apart. Nick notices this dishonesty he thinks to himself, “Daisy was not a Catholic and I was a little shocked at the elaborateness of the lie” (33). Tom lies to people saying that Daisy’s a catholic because he really wants to stay with Daisy instead of leaving her for Myrtle. Tom cares deeply about Daisy. Tom’s affair with Myrtle is nothing to him as he says that he doesn’t have as strong feeling as he does for Daisy tom says: “And what’s more I love Daisy too once in a while I go off on a spree and make a fool of myself but I always come back and in my heart I love her all the time” (131). Although Tom cheats on Daisy he still has a heavy heart for his wife Daisy who he is married to.

Tom although he cheats on his wife Daisy with Myrtle Wilson he still loves Daisy and wants to stay with her. Early in the book Nick meets Gatsby at one of Gatsby’s big parties where there were people from all over. Nick when he first meet Gatsby got a weird feeling from him: “It was one of those rare smiles with a quality of eternal reassurance” (48). And then the feeling of Gatsby as a person who made you feel special and if you were the only person in the world changes: “Precisely at that point it vanished” (48). Nick realizes that Gatsby had a way with how he went about socializing with people as almost as it was fake. Nick also saw when first meeting Gatsby that he had a way with words as if he was: “picking his words with care” (48). This almost seemed as if Gatsby was a fake person and was dishonest with how he talked and acted with people. He did this so that he could leave a good impression with people. This was important with Nick because he was Daisy’s cousin who Gatsby had longed to be with so that impression mattered.

Gatsby in the whole novel cares about how he would have people would think about him and would be dishonest in how he interacted to think that the people that he talked to were special. In conclusion, dishonesty in The Great Gatsby is a strong theme throughout the book. Its shown with Gatsby when he created a fake persona with how he made his large fortune and his interactions with people leaving a everlasting effect. And with Tom where he lied about his true love to Daisy and how he wanted to stay with her instead of marrying his mistress Myrtle Wilson by lying to people about Daisy’s morals. Dishonesty is a way to convey people to think and act toward your favor or others but when truth comes out it can be fatal.

Psychoanalysis of the Great Gatsby and His Dishonesty. (2022, Apr 14). Retrieved from https://papersowl.com/examples/psychoanalysis-of-the-great-gatsby-and-his-dishonesty/

The Women of the Great Gatsby

Wealth in the Great Gatsby

How are Women Portrayed in the Great Gatsby