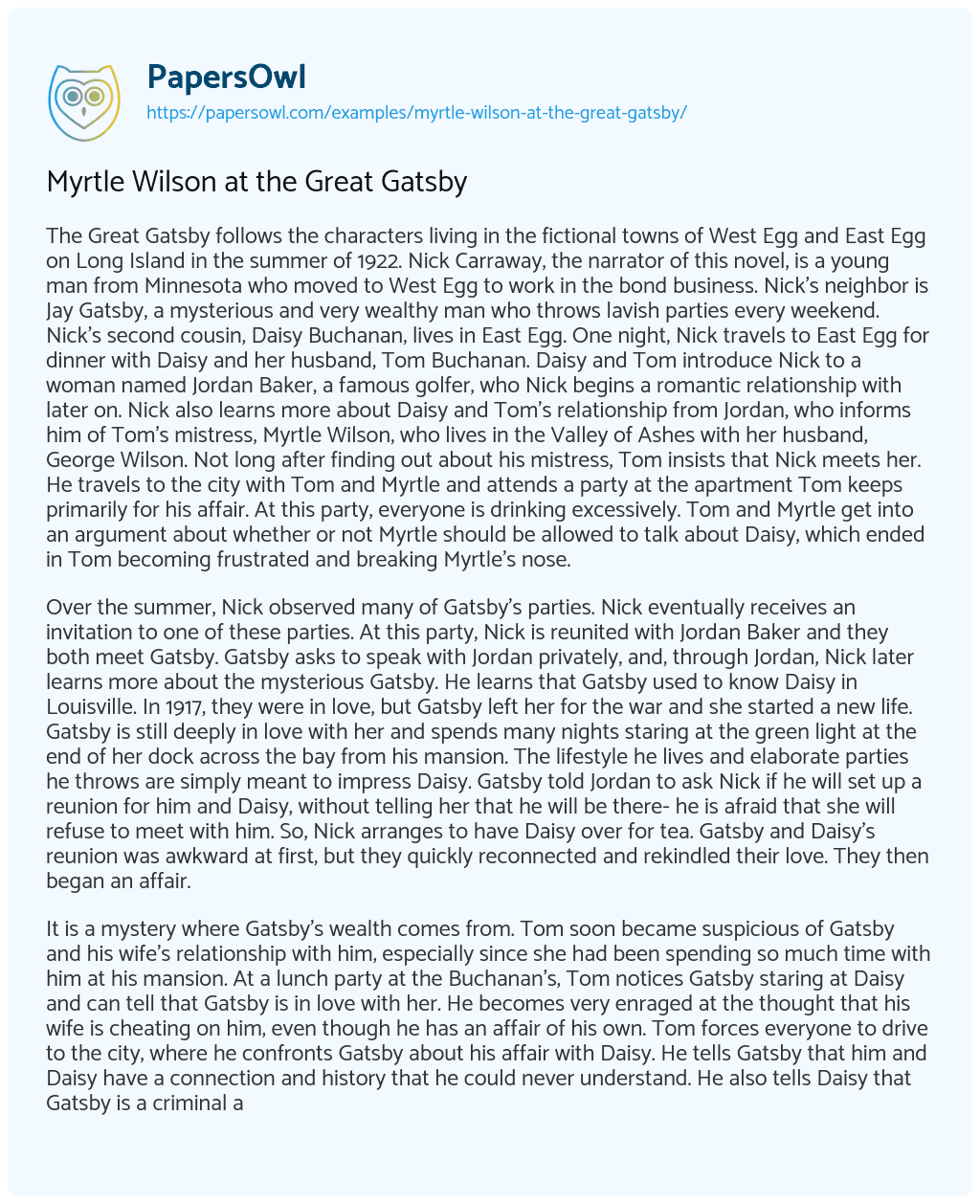 The Great Gatsby follows the characters living in the fictional towns of West Egg and East Egg on Long Island in the summer of 1922. Nick Carraway, the narrator of this novel, is a young man from Minnesota who moved to West Egg to work in the bond business. Nick’s neighbor is Jay Gatsby, a mysterious and very wealthy man who throws lavish parties every weekend. Nick’s second cousin, Daisy Buchanan, lives in East Egg. One night, Nick travels to East Egg for dinner with Daisy and her husband, Tom Buchanan. Daisy and Tom introduce Nick to a woman named Jordan Baker, a famous golfer, who Nick begins a romantic relationship with later on. Nick also learns more about Daisy and Tom’s relationship from Jordan, who informs him of Tom’s mistress, Myrtle Wilson, who lives in the Valley of Ashes with her husband, George Wilson. Not long after finding out about his mistress, Tom insists that Nick meets her. He travels to the city with Tom and Myrtle and attends a party at the apartment Tom keeps primarily for his affair. At this party, everyone is drinking excessively. Tom and Myrtle get into an argument about whether or not Myrtle should be allowed to talk about Daisy, which ended in Tom becoming frustrated and breaking Myrtle’s nose.

Over the summer, Nick observed many of Gatsby’s parties. Nick eventually receives an invitation to one of these parties. At this party, Nick is reunited with Jordan Baker and they both meet Gatsby. Gatsby asks to speak with Jordan privately, and, through Jordan, Nick later learns more about the mysterious Gatsby. He learns that Gatsby used to know Daisy in Louisville. In 1917, they were in love, but Gatsby left her for the war and she started a new life. Gatsby is still deeply in love with her and spends many nights staring at the green light at the end of her dock across the bay from his mansion. The lifestyle he lives and elaborate parties he throws are simply meant to impress Daisy. Gatsby told Jordan to ask Nick if he will set up a reunion for him and Daisy, without telling her that he will be there- he is afraid that she will refuse to meet with him. So, Nick arranges to have Daisy over for tea. Gatsby and Daisy’s reunion was awkward at first, but they quickly reconnected and rekindled their love. They then began an affair.

It is a mystery where Gatsby’s wealth comes from. Tom soon became suspicious of Gatsby and his wife’s relationship with him, especially since she had been spending so much time with him at his mansion. At a lunch party at the Buchanan’s, Tom notices Gatsby staring at Daisy and can tell that Gatsby is in love with her. He becomes very enraged at the thought that his wife is cheating on him, even though he has an affair of his own. Tom forces everyone to drive to the city, where he confronts Gatsby about his affair with Daisy. He tells Gatsby that him and Daisy have a connection and history that he could never understand. He also tells Daisy that Gatsby is a criminal and all his wealth comes from bootlegging and other illegal/criminal activities. Daisy realizes that she is married to Tom and needs to remain faithful to him. Tom sends her back to East Egg with Gatsby, to prove that Gatsby cannot hurt or bother him. When Nick, Jordan, and Tom get to the Valley of Ashes, they realize that Gatsby’s car has hit and killed Myrtle, Tom’s mistress. They hurry back to East Egg, and Gatsby tells Nick that Daisy was the one driving his car and that she hit Myrtle. However, Gatsby intends to take the blame. The next day, Tom tells Myrtle’s husband, George, that Gatsby was the one who killed Myrtle. George assumes that Gatsby must have been Myrtle’s lover and killed her in rage. He then goes to Gatsby’s mansion, finds Gatsby in his pool, and shoots and kills him. He then shoots himself.

Nick puts together a funeral for Gatsby, in which nobody attends- not even the people who attended Gatsby’s parties and pretended to like him. Due to the disgust he feels for the people encompassing Gatsby’s life and the wealthy people in West/East Egg, he breaks up with Jordan and moves back to the Midwest. Nick connects Gatsby’s dream of being with Daisy to the American dream. Daisy was a dream for Gatsby, just like America was a dream for many others. However, people often do not realize that the American dream is ultimately unattainable.

Myrtle Wilson at the Great Gatsby. (2022, Apr 13). Retrieved from https://papersowl.com/examples/myrtle-wilson-at-the-great-gatsby/

Women Oppression and Social Class in the Great Gatsby

The Women of the Great Gatsby

Is the Great Gatsby Historical Fiction?