Symbolic Objects in “The Glass Menagerie” 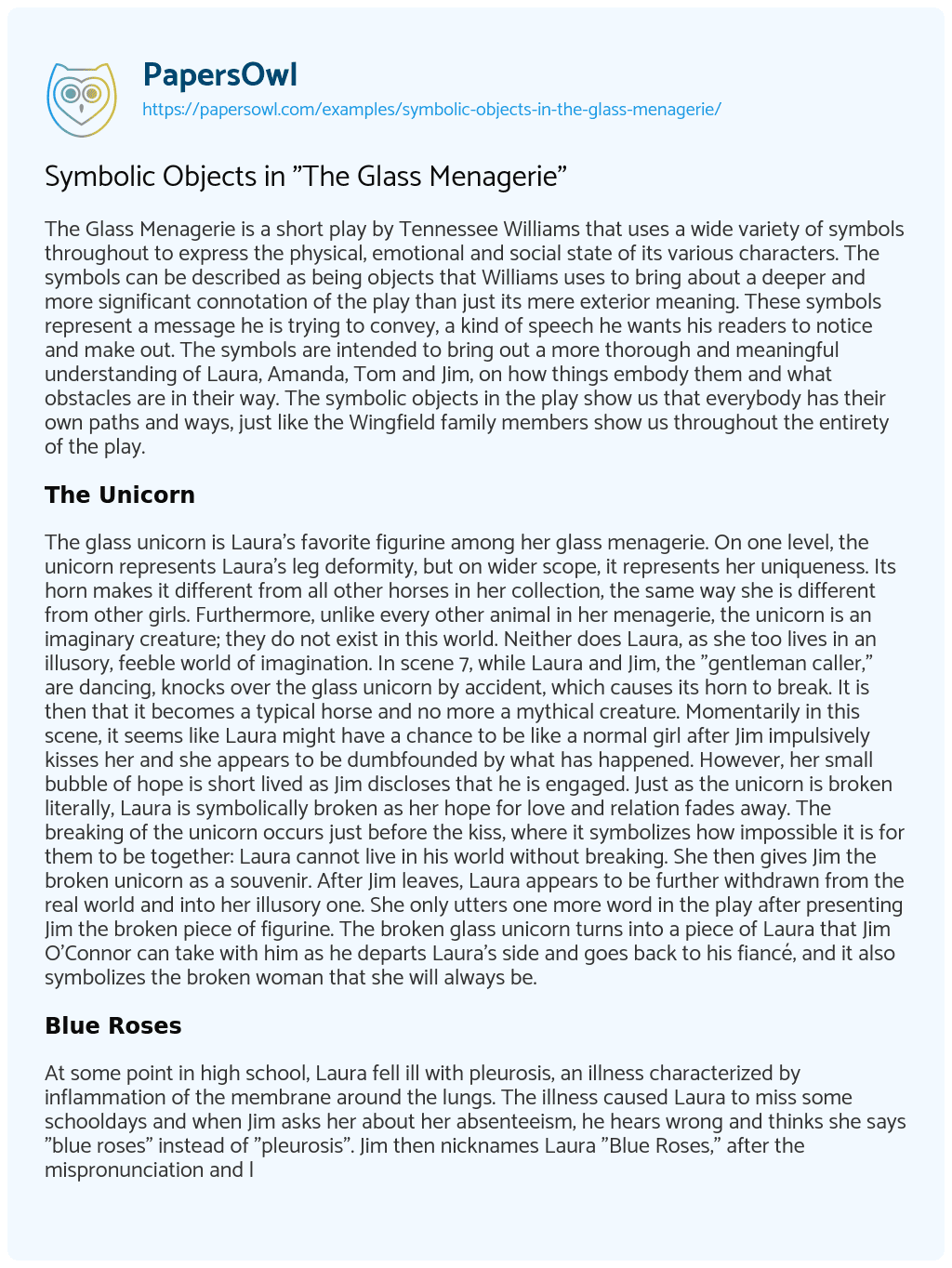 The Glass Menagerie is a short play by Tennessee Williams that uses a wide variety of symbols throughout to express the physical, emotional and social state of its various characters. The symbols can be described as being objects that Williams uses to bring about a deeper and more significant connotation of the play than just its mere exterior meaning. These symbols represent a message he is trying to convey, a kind of speech he wants his readers to notice and make out. The symbols are intended to bring out a more thorough and meaningful understanding of Laura, Amanda, Tom and Jim, on how things embody them and what obstacles are in their way. The symbolic objects in the play show us that everybody has their own paths and ways, just like the Wingfield family members show us throughout the entirety of the play.

The glass unicorn is Laura’s favorite figurine among her glass menagerie. On one level, the unicorn represents Laura’s leg deformity, but on wider scope, it represents her uniqueness. Its horn makes it different from all other horses in her collection, the same way she is different from other girls. Furthermore, unlike every other animal in her menagerie, the unicorn is an imaginary creature; they do not exist in this world. Neither does Laura, as she too lives in an illusory, feeble world of imagination. In scene 7, while Laura and Jim, the “gentleman caller,” are dancing, knocks over the glass unicorn by accident, which causes its horn to break. It is then that it becomes a typical horse and no more a mythical creature. Momentarily in this scene, it seems like Laura might have a chance to be like a normal girl after Jim impulsively kisses her and she appears to be dumbfounded by what has happened. However, her small bubble of hope is short lived as Jim discloses that he is engaged. Just as the unicorn is broken literally, Laura is symbolically broken as her hope for love and relation fades away. The breaking of the unicorn occurs just before the kiss, where it symbolizes how impossible it is for them to be together: Laura cannot live in his world without breaking. She then gives Jim the broken unicorn as a souvenir. After Jim leaves, Laura appears to be further withdrawn from the real world and into her illusory one. She only utters one more word in the play after presenting Jim the broken piece of figurine. The broken glass unicorn turns into a piece of Laura that Jim O’Connor can take with him as he departs Laura’s side and goes back to his fiancé, and it also symbolizes the broken woman that she will always be.

At some point in high school, Laura fell ill with pleurosis, an illness characterized by inflammation of the membrane around the lungs. The illness caused Laura to miss some schooldays and when Jim asks her about her absenteeism, he hears wrong and thinks she says “blue roses” instead of “pleurosis”. Jim then nicknames Laura “Blue Roses,” after the mispronunciation and like the glass unicorn, Blue Roses symbolizes Laura’s character. Jim tells Laura the color makes her beauty unique. Laura herself states, “blue is wrong for – roses” (Pp. 137). The phrase, Blue Roses, represents Laura’s delicate and otherworldly beauty and her difference from other girls, which makes her feel pretty and special when he calls her that. Nonetheless, she only “blooms” for a moment after Jim kissed her. The phrase also relates to Laura’s allure to Jim and the kind of joy that his special treatment brings her.

Moreover, the term “Blue Roses” may recall Tennessee Williams’ sister, Rose, on whom Laura’s character is based. Rose was diagnosed with schizophrenia and Williams may have been used the term “Blue Roses” to indirectly refer to her and her uniqueness. She underwent lobotomy, a surgical operation at the time was alleged to treat mental illnesses and Williams felt responsible for not being able to stop the procedure and come to his sister’s aid. Rose was institutionalized for much of her adult life and Williams stayed close to her up until his demise in 1983. Rose would later pass away in 1996.

Lastly, Jim O’Connor himself is also a symbolic object in the play. He symbolizes and represents two distinct things for both Laura and Amanda. For Laura, Jim is an embodiment of ‘normality’, which is the one thing she is most fearful of. Her whole life, Laura has been different and has never got to lead a normal life because of her physical condition. She is aware of her physical challenges and this can even be deduced from how her favorite figurine from her glass menagerie is of a unicorn, an animal that is anything but normal. Jim is as normal as a guy could get – having no unique qualities or exceptional characteristic. This is supported by Tom’s description of Jim as being a “plain guy” and by the play’s depiction of him as an “ordinary man.” In a conversation with Jim, Laura seems to observe/experience some normalness and is initially shy and nervous of it. This is deduced from the beginning of their exchange as they are conversing, when Laura “clears her throat and turns away again” (Pp. 77).

To Amanda, Jim symbolizes something entirely different. He is a representation of Amanda’s youth days, when she went skipping about picking jonquils and allegedly put up with “seventeen gentlemen callers on one Sunday afternoon.” Even though Amanda wishes to see Laura settle down with a good young man, we cannot exactly tell whether she fancied a gentleman caller coming over for Laura or for herself. For instance, when Amanda learns that Jim would be dropping by, she says “Preparations… I could have been getting ready” (Pp. 93). Her delight somewhat indicates that she wanted Jim to come over for herself and not exactly for Laura. Another instance supporting that Amanda wanted Jim to come over for herself is when she says, “How about clothes? We have to wear something, don’t we?” (Pp. 93). This may be a good indication that she meant to dress nicely for Jim to make a good impression and maybe have him for herself.

In essence, when Tennessee Williams uses symbols like the glass unicorn, Blue Roses, and Jim O’Connor, he gives the play a whole new dimension of reflection. Using these symbols, he is able to bring out deeper understanding and life to the characters. Without symbols like the glass unicorn, it would have been extremely difficult to comprehend how a character like Laura feels on the inside: is she happy? Sad? Lonely? Symbols are crucial to ‘The Glass Menagerie’ as they make the play interesting and are also the reason why we are able to analyze characters. Summing it up and to add a cutting-edge to my paper, here is a quote by Tennessee Williams: “Symbols are nothing but the natural speech of drama.”

Symbolic Objects in "The Glass Menagerie". (2021, Apr 15). Retrieved from https://papersowl.com/examples/symbolic-objects-in-the-glass-menagerie/