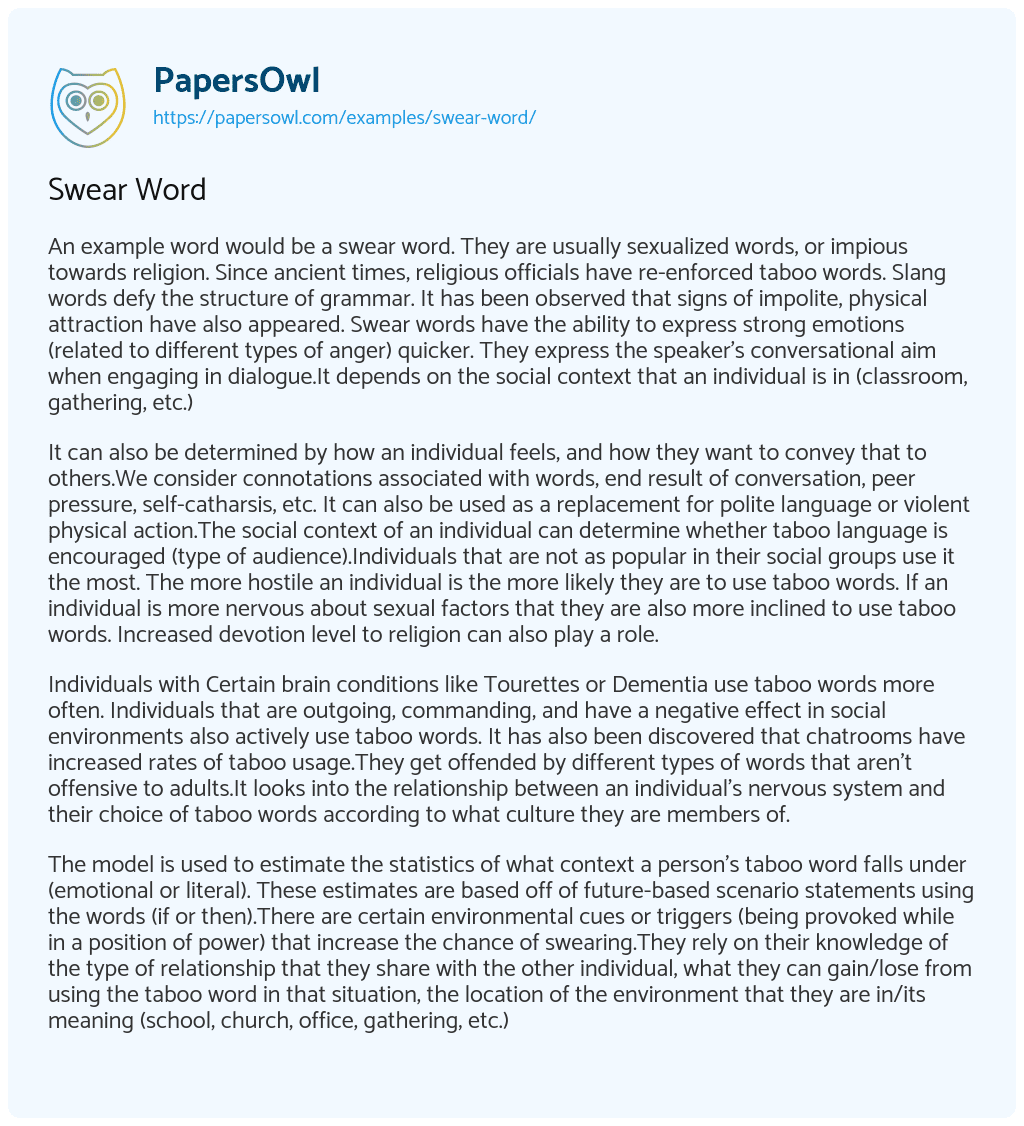 An example word would be a swear word. They are usually sexualized words, or impious towards religion. Since ancient times, religious officials have re-enforced taboo words. Slang words defy the structure of grammar. It has been observed that signs of impolite, physical attraction have also appeared. Swear words have the ability to express strong emotions (related to different types of anger) quicker. They express the speaker’s conversational aim when engaging in dialogue.It depends on the social context that an individual is in (classroom, gathering, etc.)

It can also be determined by how an individual feels, and how they want to convey that to others.We consider connotations associated with words, end result of conversation, peer pressure, self-catharsis, etc. It can also be used as a replacement for polite language or violent physical action.The social context of an individual can determine whether taboo language is encouraged (type of audience).Individuals that are not as popular in their social groups use it the most. The more hostile an individual is the more likely they are to use taboo words. If an individual is more nervous about sexual factors that they are also more inclined to use taboo words. Increased devotion level to religion can also play a role.

Individuals with Certain brain conditions like Tourettes or Dementia use taboo words more often. Individuals that are outgoing, commanding, and have a negative effect in social environments also actively use taboo words. It has also been discovered that chatrooms have increased rates of taboo usage.They get offended by different types of words that aren’t offensive to adults.It looks into the relationship between an individual’s nervous system and their choice of taboo words according to what culture they are members of.

The model is used to estimate the statistics of what context a person’s taboo word falls under (emotional or literal). These estimates are based off of future-based scenario statements using the words (if or then).There are certain environmental cues or triggers (being provoked while in a position of power) that increase the chance of swearing.They rely on their knowledge of the type of relationship that they share with the other individual, what they can gain/lose from using the taboo word in that situation, the location of the environment that they are in/its meaning (school, church, office, gathering, etc.)

A Social Competition in Women and a Benevolent Sexism

Coming to Life: the Journey to Identity