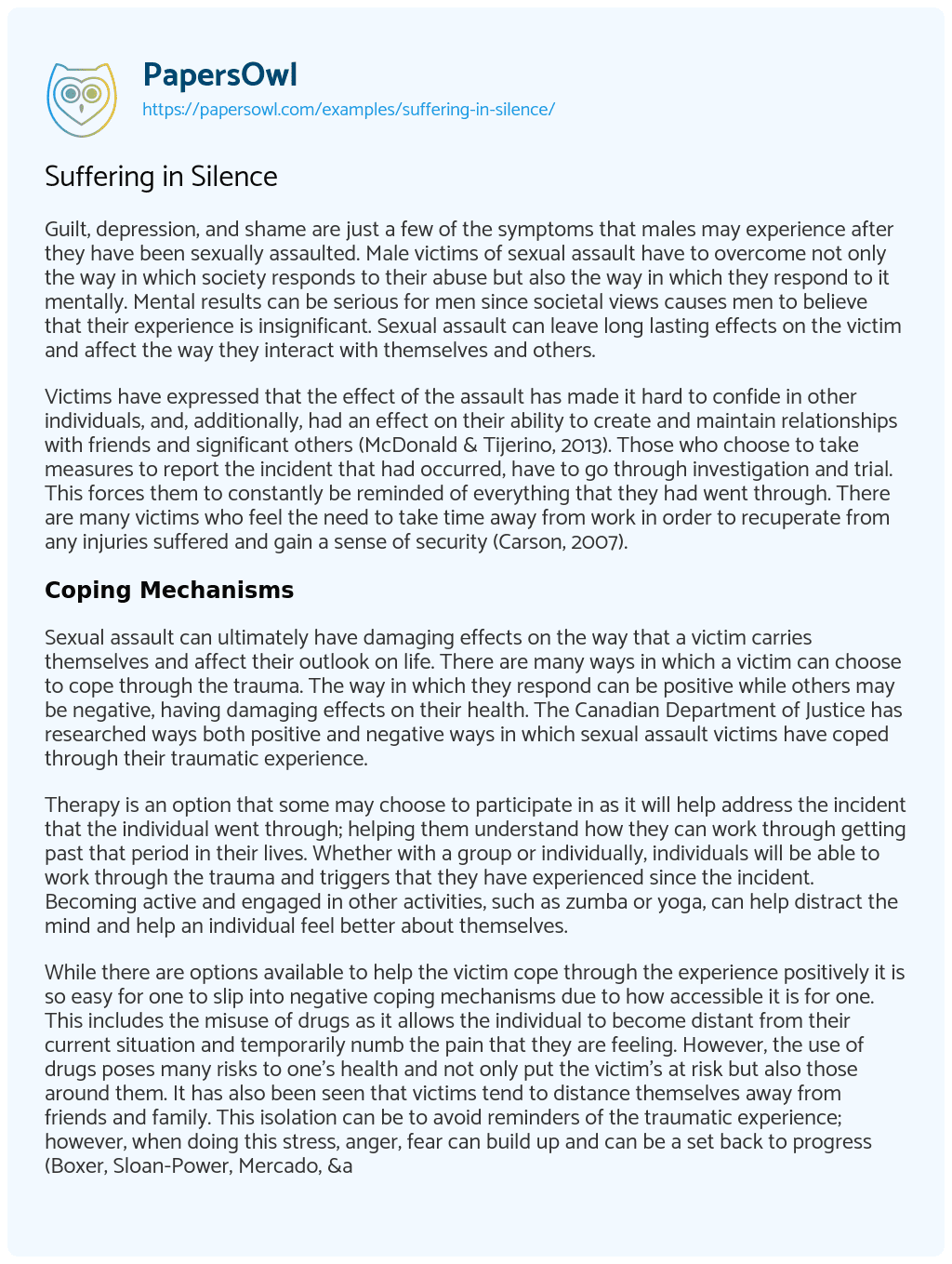 Guilt, depression, and shame are just a few of the symptoms that males may experience after they have been sexually assaulted. Male victims of sexual assault have to overcome not only the way in which society responds to their abuse but also the way in which they respond to it mentally. Mental results can be serious for men since societal views causes men to believe that their experience is insignificant. Sexual assault can leave long lasting effects on the victim and affect the way they interact with themselves and others.

Victims have expressed that the effect of the assault has made it hard to confide in other individuals, and, additionally, had an effect on their ability to create and maintain relationships with friends and significant others (McDonald & Tijerino, 2013). Those who choose to take measures to report the incident that had occurred, have to go through investigation and trial. This forces them to constantly be reminded of everything that they had went through. There are many victims who feel the need to take time away from work in order to recuperate from any injuries suffered and gain a sense of security (Carson, 2007).

Sexual assault can ultimately have damaging effects on the way that a victim carries themselves and affect their outlook on life. There are many ways in which a victim can choose to cope through the trauma. The way in which they respond can be positive while others may be negative, having damaging effects on their health. The Canadian Department of Justice has researched ways both positive and negative ways in which sexual assault victims have coped through their traumatic experience.

Therapy is an option that some may choose to participate in as it will help address the incident that the individual went through; helping them understand how they can work through getting past that period in their lives. Whether with a group or individually, individuals will be able to work through the trauma and triggers that they have experienced since the incident. Becoming active and engaged in other activities, such as zumba or yoga, can help distract the mind and help an individual feel better about themselves.

While there are options available to help the victim cope through the experience positively it is so easy for one to slip into negative coping mechanisms due to how accessible it is for one. This includes the misuse of drugs as it allows the individual to become distant from their current situation and temporarily numb the pain that they are feeling. However, the use of drugs poses many risks to one’s health and not only put the victim’s at risk but also those around them. It has also been seen that victims tend to distance themselves away from friends and family. This isolation can be to avoid reminders of the traumatic experience; however, when doing this stress, anger, fear can build up and can be a set back to progress (Boxer, Sloan-Power, Mercado, & Schappell, 2012) (McDonald & Tijerino, 2013).

Sexual assault can have an impact on an individual’s lifestyle and mental state in addition to largely impacting their economic state. From legal fees, mental and physical health costs, and a possible loss in work productivity, the ability to recover and seek justice can depend largely on the economic status of the victim.

Time off of work due to time spent for court appearance, seeking medical attention due to any possible injuries, and their psychological state may affect the victim’s ability to hold a job. This affects the individual’s work productivity and how much money they are able to spend on legal, medical, and mental health fees.

The Center for Disease Control (CDC) conducted a study and found that the lifetime cost of sexual assault per victim is estimated to be about $122,461 (Grove, 2017). Analyzing the cost that sexual assault has on an individual will vary depending on what resources that they choose to seek and where they go to seek those resources will cause the prices to vary. The amount of time an individual spends in therapy will vary depending on the person, the extent of the crime, and their comfortability. This is to be true for when a victim is seeking legal justice, as the cost of an attorney can vary based off of their experience and success rate.

Government funding for sexual assault programs targeted specifically for men are virtually nonexistent. This means that the government funds towards sexual assault victims usually are all attached together or are targeted specifically towards women. The Virginia Victims Fund is an example of state government funding used to assist victims of violent crimes with any out of pocket expenses (Virginia Workers’ Compensation Commission, 2018). The Office of Violence Against Women is a program designed to provide assistance to victims of sexual assault (U.S. Department of Justice & Office on Violence Against Women, 2017).

The UK has become progressive in the way in which they have handled the sexual assault of males. A charity in London called SurvivorsUK, is a program that had received £78,000 from the government in order to assist those males who have fallen victim of sexual assault (BBC News, 2016). In addition, Clinic26 is a clinic in London that was the first UK clinic opened to provide health services as well as emotional support for male victims of sexual assault (BBC News, 2017). By providing funding for programs that assist both male victims and female victims or programs targeted specifically for women avoids addressing the issue by not giving male sexual assault the attention that it deserves.

Suffering in Silence. (2020, May 05). Retrieved from https://papersowl.com/examples/suffering-in-silence/

The Suffering of Black Women

Sexual Assault/Sexual Harassment in the Military

The Progression of SHARP