Making Sense of the Suffering of Job 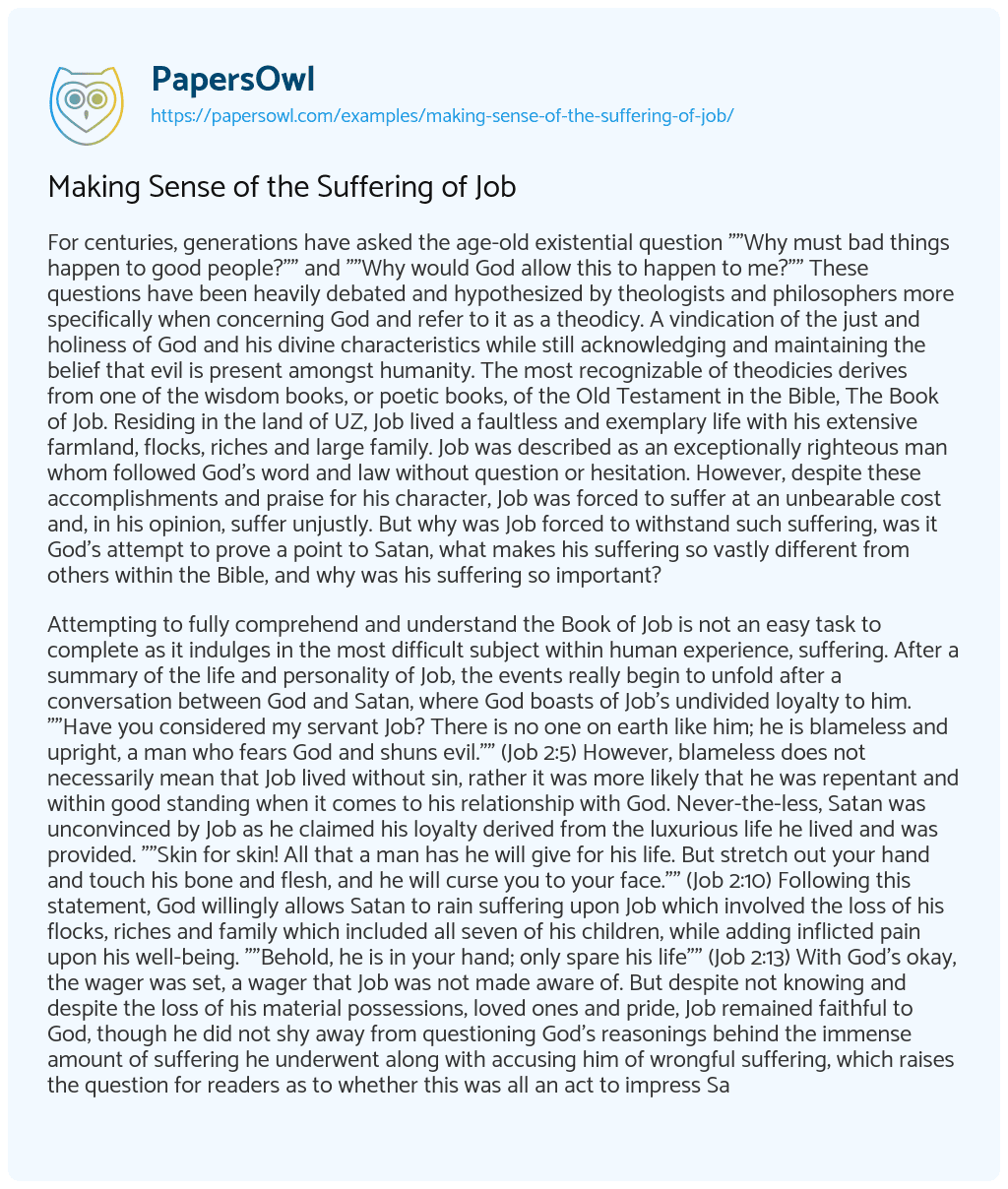 For centuries, generations have asked the age-old existential question “”Why must bad things happen to good people?”” and “”Why would God allow this to happen to me?”” These questions have been heavily debated and hypothesized by theologists and philosophers more specifically when concerning God and refer to it as a theodicy. A vindication of the just and holiness of God and his divine characteristics while still acknowledging and maintaining the belief that evil is present amongst humanity. The most recognizable of theodicies derives from one of the wisdom books, or poetic books, of the Old Testament in the Bible, The Book of Job. Residing in the land of UZ, Job lived a faultless and exemplary life with his extensive farmland, flocks, riches and large family. Job was described as an exceptionally righteous man whom followed God’s word and law without question or hesitation. However, despite these accomplishments and praise for his character, Job was forced to suffer at an unbearable cost and, in his opinion, suffer unjustly. But why was Job forced to withstand such suffering, was it God’s attempt to prove a point to Satan, what makes his suffering so vastly different from others within the Bible, and why was his suffering so important?

Attempting to fully comprehend and understand the Book of Job is not an easy task to complete as it indulges in the most difficult subject within human experience, suffering. After a summary of the life and personality of Job, the events really begin to unfold after a conversation between God and Satan, where God boasts of Job’s undivided loyalty to him. “”Have you considered my servant Job? There is no one on earth like him; he is blameless and upright, a man who fears God and shuns evil.”” (Job 2:5) However, blameless does not necessarily mean that Job lived without sin, rather it was more likely that he was repentant and within good standing when it comes to his relationship with God. Never-the-less, Satan was unconvinced by Job as he claimed his loyalty derived from the luxurious life he lived and was provided. “”Skin for skin! All that a man has he will give for his life. But stretch out your hand and touch his bone and flesh, and he will curse you to your face.”” (Job 2:10) Following this statement, God willingly allows Satan to rain suffering upon Job which involved the loss of his flocks, riches and family which included all seven of his children, while adding inflicted pain upon his well-being. “”Behold, he is in your hand; only spare his life”” (Job 2:13) With God’s okay, the wager was set, a wager that Job was not made aware of. But despite not knowing and despite the loss of his material possessions, loved ones and pride, Job remained faithful to God, though he did not shy away from questioning God’s reasonings behind the immense amount of suffering he underwent along with accusing him of wrongful suffering, which raises the question for readers as to whether this was all an act to impress Satan and prove him wrong.

Realistically, it is highly unlikely that God cared much for what Satan thought or believed to be true, but at first glance it does appear and come across as though that God not only wagered over the outcome of Job’s suffering but provoked and enabled the bet. However, through an extensive reading, a more radically different dynamic is unveiled within the conversation Job has with his three friends Eliphaz the Temanite, Bildad the Shuhite and Zophar the Naamathite. What started out as humble attempt to mourn for Job, the friends quickly turn to a similar debate that was had between God and Satan which is what began the serious of unfortunate events for Job. However, the difference is that their discussion revolves around the idea that Job was somehow to blame for his own suffering as to them, suffering is a sign of sin present in one’s life.

Though the conversation started off with the good-natured qualities that Job possessed, Eliphaz was the first of the three to declare that he had brought upon his own undoing. “”Remember,”” he says, “”Who that was innocent ever perished? Or where were the upright cut off? As I have seen, those who plow iniquity and sow trouble reap the same”” (Job 4:11-14). Bildad agrees with the statement given by Eliphaz by adding: “”Behold, God will not reject a blameless man, nor take the hand of evildoers”” (Job 8:38). And all of this was reiterated by Zophar. “”If iniquity is in your hand, put it far away, and let not injustice dwell in your tents. Surely then you will lift up your face without blemish; you will be secure and will not fear….And your life will be brighter than the noonday; its darkness will be like the morning”” (Job 11:27-33). This form of logical argumentation is known as syllogism, which refers to the application of empirical reasoning to attain at a conclusion based on two or more propositions that are emphasized or presumed to be true. Suffering is brought upon by wrongdoing or sin therefore you must have committed some sort of sinful act or wrongdoing to deserve the pain you have been provided.

This generalization presented by the three friends regarding Job’s current situation was riddled with error as they too were unaware of the conversation between God and Satan along with failing to realize that suffering is not just a form of punishment but a means for education for the masses, or at least within the eyes of God. At one point, Jesus himself points out the fact that devastation is not an automatic symbol of God’s judgement. “”Do you think that these Galileans were worse sinners than all the other Galileans, because they suffered in this way? No, I tell you; but unless you repent, you will all likewise perish. (Luke 13:5) For the friends of Job, it was almost easier to provide insight on the reasoning behind his suffering, for knowing the cause one can avoid the same fate. Even if the concept of his suffering was contaminated with falsehoods, it was much easier for them to accept these falsehoods versus having to accept a mystery. And even though the mystery at hand was applicable in the case of Job, the discussion amongst the friends continues, increasing with hostility as they refuse to recognize their lack of evidence in defense of their statements. “”There is no end to your iniquities,”” says Eliphaz (Job 22:8). “”You have given no water to the weary to drink, and you have withheld bread from the hungry. You have sent widows away empty-handed, and the arms of the orphans you have crushed”” (Job 22:11-15). These particular scenes with Eliphaz, Bildad and Zophar were brilliantly crafted to allow the reader to see themselves in the standing of the friends as it is far too easy to pass ignorant judgement than to willingly acknowledge that there may not be a better understanding as to why certain things happen for what seems like no good reason. It is true when they say that God works in mysterious ways and Job is prime evidence. “”Such knowledge is too wonderful for me; it is high; I cannot attain it”” (Psalm 139:10).

A common topic amongst theologist is to compare the suffering of Job with another protagonist from the Bible in hopes that it may help in attempting to better understand the concept of suffering and how it applies to Job. Though it has been made clear that the suffering of Job was unclear, it is not the only means or form of suffering within the texts of the Bible. Take for example the anti-Job, Jonah. When called to do his bidding and speak on his behalf by God himself “”Arise, go to Nineveh, that great city, and call out against it, for their evil has come up before me.”” (Jonah 1:2), who had clear motive for his request on what to do and how, Jonah refused to answer: “”But Jonah rose to flee to Tarshish from the presence of the Lord.”” (Jonah 1:3), which inevitably resulted in his suffering. Jonah was more than willing to show his disobedience toward God which caused him to end up in the belly of a great fish. Moses suffered when he disobeyed, which resulted in his suffering as being no longer allowed entrance into the promised land. And David suffered when he disobeyed through his willingness to commit adulterous crimes. In many cases, suffering is present because of unwise decision making and the willingness to make them. In many of these cases, Job’s friends would have been absolutely validated when saying you suffer at your own hands as means of punishment. It is plausible to suffer for known reasons, however, like Job this may not always reign true.

Making Sense of the Suffering of Job. (2019, May 26). Retrieved from https://papersowl.com/examples/making-sense-of-the-suffering-of-job/

Suffering for Us to Grow in Character