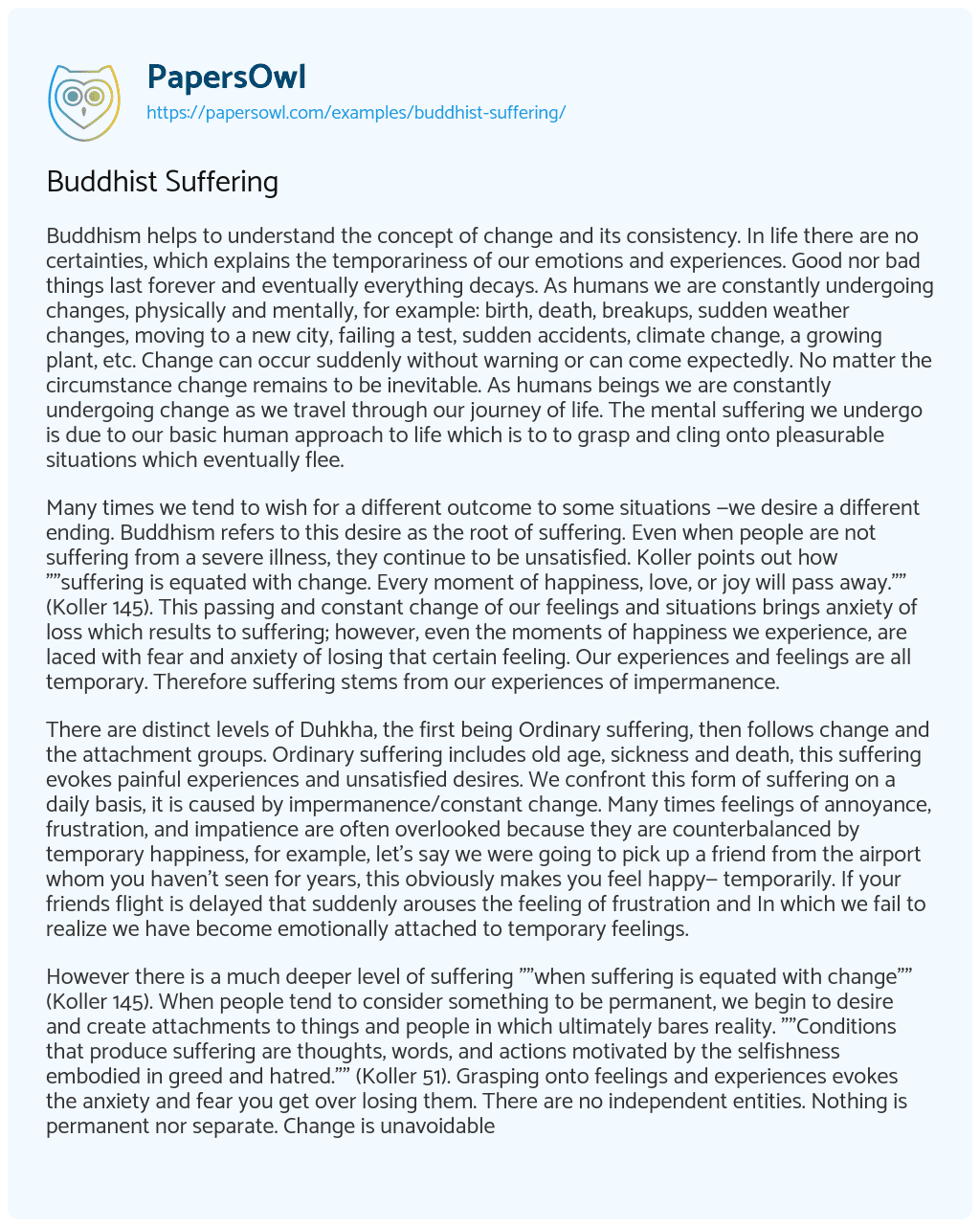 Buddhism helps to understand the concept of change and its consistency. In life there are no certainties, which explains the temporariness of our emotions and experiences. Good nor bad things last forever and eventually everything decays. As humans we are constantly undergoing changes, physically and mentally, for example: birth, death, breakups, sudden weather changes, moving to a new city, failing a test, sudden accidents, climate change, a growing plant, etc. Change can occur suddenly without warning or can come expectedly. No matter the circumstance change remains to be inevitable. As humans beings we are constantly undergoing change as we travel through our journey of life. The mental suffering we undergo is due to our basic human approach to life which is to to grasp and cling onto pleasurable situations which eventually flee.

Many times we tend to wish for a different outcome to some situations —we desire a different ending. Buddhism refers to this desire as the root of suffering. Even when people are not suffering from a severe illness, they continue to be unsatisfied. Koller points out how “”suffering is equated with change. Every moment of happiness, love, or joy will pass away.”” (Koller 145). This passing and constant change of our feelings and situations brings anxiety of loss which results to suffering; however, even the moments of happiness we experience, are laced with fear and anxiety of losing that certain feeling. Our experiences and feelings are all temporary. Therefore suffering stems from our experiences of impermanence.

There are distinct levels of Duhkha, the first being Ordinary suffering, then follows change and the attachment groups. Ordinary suffering includes old age, sickness and death, this suffering evokes painful experiences and unsatisfied desires. We confront this form of suffering on a daily basis, it is caused by impermanence/constant change. Many times feelings of annoyance, frustration, and impatience are often overlooked because they are counterbalanced by temporary happiness, for example, let’s say we were going to pick up a friend from the airport whom you haven’t seen for years, this obviously makes you feel happy— temporarily. If your friends flight is delayed that suddenly arouses the feeling of frustration and In which we fail to realize we have become emotionally attached to temporary feelings.

However there is a much deeper level of suffering “”when suffering is equated with change”” (Koller 145). When people tend to consider something to be permanent, we begin to desire and create attachments to things and people in which ultimately bares reality. “”Conditions that produce suffering are thoughts, words, and actions motivated by the selfishness embodied in greed and hatred.”” (Koller 51). Grasping onto feelings and experiences evokes the anxiety and fear you get over losing them. There are no independent entities. Nothing is permanent nor separate. Change is unavoidable. The suffering that is evoked through change reflects a central Buddhist belief. If one gets a headache, then their head hurts. If a loved one gets a fever, we worry about their health. Life is suffering.

The final level of Duhkha includes the five attachment groups: Physical change, Sensations, Perceptual activities, Impulses to action and Consciousness. This level of Duhkha differs from the first 2 because unlike the other two levels of suffering which originate from impermanence or change, this Duhkha stems from desire and craving . The five attachment groups are “”factors that constitute a person”” (Koller 146), In other words these groups govern our day to day lives and are a constituting feature of a human. Buddhism describes “”self”” as being nothing over and above these five groups of factors. Koller mentions, “”The self taken to have an independent existence as the owner of the groups is only a construction of the five groups.”” (Koller 148). There is “”no real self””, yet we become attached to these groups and form these ideas, thinking, “”I am this.”” or “”they are mine”” (Koller 148). We as human beings suffer because we project this myth of permanence upon situations that are ultimately constantly changing, selfless and conditioned.

According to the Koller, “”human life is a continuous process of change, rising and falling through interdependence with numerous other processes.”” (Koller 153). We tend to suffer so much because we live our lives believing the myth of permanence, for example, being happy about finishing an essay and feeling confident in your work, then finding out you received an undesirable grade. Experiences and feelings do not last forever because change is constant; subsequently, attachment evokes unconscious anxiety and fear that begin to dominate our daily lives. Clinging only results in fear and anxiety but is masked by the brief moments of happiness. We constantly seek happiness, but once get it we are afraid to lose it. Since we cling onto that fear of losing what makes us happy, that persistent fear leads to suffering.

“”there are no beings that exist independently of each other; there are only ongoing processes of mutually dependent factors… things are merely abstractions from the processes that constitute reality.”” (Koller 72)

This shows the interdependence between our moods, reactions, decisions, and fears. Each of these factors flows into the next. This is a much more difficult Buddhist concept to understand, especially because people naturally tend to view things as independent of one another. But this teaches us the interconnectedness between everything. Everything is a part of a greater whole and nothing exists by itself. For example, A cup of coffee is not just a coffee, it once was a bean that required sun, moisture and soil. Therefore the coffee is not “”just coffee”” exiting by itself; moreover, we can better describe the coffee as “”interexisting with everything else.”” (Koller 82).

Koller often describe Duhkha as our, “”unconscious fears and anxieties that dominate our lives to a much greater extent than most of us realize.”” (Koller 145). Because everything which exists is constantly changing, our desire for permanence and happiness ultimately is doomed to end in failure. For these reasons, Buddhism characterizes existence as pain/ Duhkha.

Existence in the Buddhist Religion